The Irish international turned down an offer to stay on reduced wages.

Richard Keogh has been sacked by Derby County, following a car crash that will leave the player sidelined for over a year.

Keogh, who was Derby's club captain, was involved in a car accident one month ago, following 'an alcohol-related incident'. 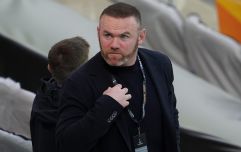 END_OF_DOCUMENT_TOKEN_TO_BE_REPLACED

Keogh was offered the chance to stay on at the club on a "fraction" of his wage, but according to The Guardian, he declined the offer.

The Irish international had been out with a number of Derby players, when his teammate Tom Lawrence crashed his car into a lamppost, resulting in serious injuries to Keogh's legs.

Lawrence is still playing for Derby, after missing one game due to the incident.

Derby's initial statement said that they would stand by the players involved, but they would pay a "heavy price".

The club said: "Those involved in Tuesday’s incident know they will pay a heavy price for their actions, but also that we will support them with their rehabilitation back into the squad and team."

Keogh had started in 316 of the club’s 330 Championship matches before the car crash, including all 10 of their play-offs fixtures.

He missed Ireland's international games against Denmark and Georgia as a result of the injury sustained in the accident.


popular
"Some of the generals wanted me executed" - Irish rugby legend on flag caper that went wrong
"Johnno went, 'We’re not moving! You're trying to mess us about!'" - Ben Kay recalls red carpet controversy
Rio Ferdinand claims that Cristiano Ronaldo should have been told to 'sit down' against Young Boys
Garry Ringrose challenges "pretty ridiculous" changing conditions for women's players
It won't mean much but Pat Spillane's compliment to Mayo and to Lee Keegan says it all
Gary Neville embarrassed again following hasty Liverpool tweet
"I am a very nervous person" - Morgan's pre-game routine shows that nerves are part of the journey
You may also like
7 months ago
Derby to appeal decision ordering them to pay Richard Keogh £2m in compensation
8 months ago
Chorley groundsman slept under heated tent on pitch to ensure Derby game could go ahead
1 year ago
Derby condemn 'small group of players' for night out that ended Richard Keogh's season
2 years ago
Why Jack Grealish's decided to play in pair a of worn out boots
2 years ago
Dean Smith opens up on his father's illness in post-match interview
2 years ago
Derby goalkeeper's howler helps send Villa back to the Premier League
Next Page