Richard Arnold: A behind the scenes look at how Man United fans' unlikely meeting with the CEO happened

How Arnold's fan meeting came to be

On Saturday afternoon, Manchester United Chief Executive Officer Richard Arnold learned a fan protest against the Glazer family's ownership of the club would take place outside his house. Instead of letting the protest go ahead, Arnold decided to meet those planning it, who were assembling at a nearby pub.

Since then, secretly recorded footage of the meeting has been widely shared across social media, generating plenty of headlines. Here is a look at the events of Saturday afternoon, including how Arnold came to find out about it.

A small protest against the Glazer family's ownership of Manchester United was due to take place outside Arnold's Cheshire home on Saturday afternoon. The Glazers are due to take dividends out of United later this month, as they do biannually. This comes after the club's poor showing in the 2021/22 season and the news that the debt the club was saddled with by the American family's 2005 takeover has risen to close to £500m.

END_OF_DOCUMENT_TOKEN_TO_BE_REPLACED

The Glazer family live in the US and have rarely visited Manchester since becoming owners of the club. Arnold, who was promoted to CEO earlier this year, answers directly to the Glazers. His prominent role at the club is why his home was chosen by supporters for the protest.

Those organising it had briefed all involved that it was to be 'peaceful and legal' and that under no circumstances should anyone taking part set foot on property belonging to the United CEO. They believed the property was not visible from the roadside where they planned to stage the protest.

Manchester United CEO Richard Arnold met with a group of fans who had planned to protest outside his home yesterday 🔴 pic.twitter.com/HeWnNaTOLF

END_OF_DOCUMENT_TOKEN_TO_BE_REPLACED

The group were mindful to avoid comparisons with an incident in 2020 when the home of Arnold's predecessor, Ed Woodward, was targeted by disgruntled United fans. On that occasion, fireworks and smoke bombs were thrown at the house, which was empty at the time, and an intercom system on the gate was covered in red paint. The culprits were also heard singing 'Ed Woodward's gonna die' in a post which was widely shared on social media the following day. United sent out a statement strongly condemning those involved and Cheshire Police investigated the incident.

At least three home-made banners had been prepared for Saturday's protest, which carried messages calling for the Glazer family - and Arnold - to leave United and for the board to be sacked. The banners, which JOE have seen in a photograph, all featured the name of The 1958, a recently formed fan group which coordinated a series of anti-Glazer marches before United home games. Despite this, The 1958 have said the protest was not organised by them, and done merely in support of their campaign to oust the Glazers - though "a couple" of those involved did have links with the group.

Arnold 'knew name of one of the group'

The protest was due to take place before 5pm on Saturday with a nearby pub, where Arnold is believed to be friends with the landlord, chosen as a meeting place. The first member of the group arrived at the pub alone early in the afternoon, taking a seat in the beer garden to wait for others to arrive. The landlord is understood to have followed him out and said hello before returning inside.

With the rest of the group yet to turn up, Arnold arrived within five minutes, introducing himself to the man, who was surprised to discover he already knew his name. Arnold is thought to have been tipped off by the landlord about the group's arrival. However, word of the protest is believed to have reached him prior to this.

A Manchester United spokesperson has since confirmed: 'Richard heard that a group of fans had gathered in a pub near his house. 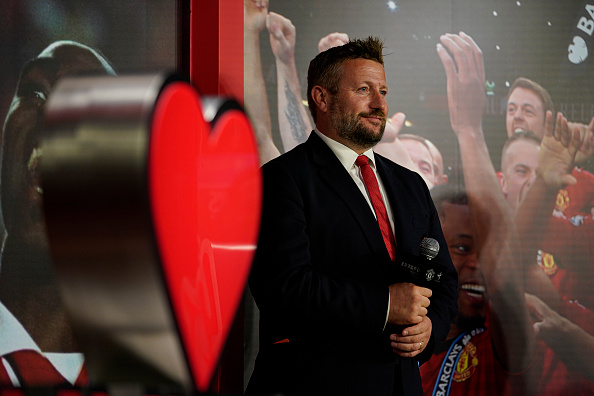 'He went to meet them, bought them all a drink, listened to their views, and explained what the club is doing to deliver success on the pitch, improve the stadium, and strengthen engagement with fans.'

A group member confirmed Arnold was generous with his time, spending over an hour talking to them and answering all questions on topics ranging from their right to protest the Glazer ownership, transfer plans and dressing room leaks. It has since been reported that Arnold asked that the conversation remained private and was not filmed. To his disappointment, secretly recorded footage was later uploaded to social media.

🚨Exclusive: Richard Arnold met United fans planning a Glazer protest outside his home in a pub on Saturday.

Here’s what they spoke about, including:

The 51-year-old has been with United since 2007. He officially replaced Woodward earlier this year having previously held the position of Group Managing Director. Since taking his new role, he has attended all meetings held by the Fans' Forum and the recently established Fans' Advisory Board. He encouraged members to voice their concerns through those channels while urging the group to "give him a clean slate".

Though some of the would-be protesters pulled no punches when giving their assessment of the Glazers' ownership of the club, Arnold managed to appease them with his openness and willingness to listen to them. One member of the group told JOE after the meeting that he "came across as a likeable guy."

Arnold 'gave contact details' to one of the group

The meeting ended amicably, with Arnold telling the group he would rather they called off the protest outside his home, which they agreed to do. Before leaving, Arnold is said to have handed one member of the group his contact details, a gesture which seemingly underlined his commitment to speaking to supporters about their concerns.

United have declined to make further comment on Saturday's events, but a spokesperson did say that fan dialogue with the club is best carried out via established channels, including the Fans’ Advisory Board, Fans’ Forum, and via Manchester United Supporters Trust (MUST).

The 1958 operate independently to any of these bodies. Their purpose remains clear: to force the Glazer family out of the club. They amassed plenty of support during the final weeks of United's dismal 2021/22 campaign. Since the season ended, they have encouraged fans to target the club's commercial sponsors. They have responded to Saturday by issuing a statement condemning the leaking of footage as a 'breach of trust' and insisting the person responsible for filming it was not associated with them.


popular
Liverpool set £60m Mo Salah price as contract talks continue
Glass half full as Derry's positive play produces five fantastic goals to reach All-Ireland semis
QUIZ: How many of the 10 most successful football counties can you name without making a mistake?
Patrick Vieira claims he was 'much better' than Roy Keane in new interview
Éamonn Fitzmaurice explains Aidan O'Shea's best position and how it can be used against Kerry
"All of a sudden he had me midfield with Niall Scully. We played Na Fianna and I was chasing after Eoin Murchan."
Conor McGregor and Floyd Mayweather 'in talks' about a rematch