It's safe to say now, with almost complete certainty, that James Rodriguez won't be a Real Madrid player next season.

Rodriguez, who has been linked with a move away from the Bernabeu for months, was left out of Madrid's squad for the Champions League final on Saturday night against Juventus.

The Colombian, who cost the Spanish side €80m from Monaco in the summer of 2014, following his brilliant displays at the World Cup, wasn't even deemed worthy of a place on the bench. 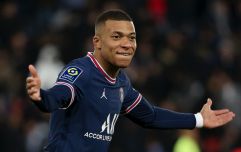 END_OF_DOCUMENT_TOKEN_TO_BE_REPLACED

There has been no word on whether the midfielder is injured. It appears Madrid manager Zinedine Zidane just doesn't fancy the player, who has been linked with a summer move to Inter Milan and Manchester United.

It now appears Rodriguez has played his last game for the Spanish club, and Zidane doesn't care about a player's status. Pepe was also omitted from Madrid's squad for the final.

I feel sorry for James Rodriguez. He has so much quality but it's clear that Zidane does no like him. A move in the summer is for the best

Good luck to anyone who continues to try and suggest United want Rodriguez when he can't even get on the Real bench tonight.

James Rodriguez not even on the bench for Madrid in Champions League final tonight, so guess has already played last game for the club...


popular
Gary Neville reveals Man United ignored advice to sign Joao Cancelo
David Meyler on how Kenny Dalglish almost signed him for Liverpool
Boris Johnson slams Jurgen Klopp for defending Liverpool fans booing national anthem
Sean O'Brien could get to play England, at Twickenham, in his final game
QUIZ: You have 60 seconds to answer one Premier League goalkeeper question
Gearoid Hegarty's harsh red card leads to a heated debate in The Sunday Game studio
"I think there are only five Kilkenny players who are guaranteed to start on any given day" - Cody's motivational methods
You may also like
1 week ago
Why Chelsea will land huge cash windfall if Real Madrid beat Liverpool in Champions League final
1 week ago
Jack Grealish deletes old Real Madrid tweet after Man City Bernabeu nightmare
1 week ago
Didi Hamann blames Pep Guardiola for Man City's loss to Real Madrid
1 week ago
"Hang on a second" - Delaney and Kerr clash on Pep's and City's failings
1 week ago
Pep Guardiola tries to explain how Man City collapsed against Real Madrid
1 week ago
Jamie Carragher has last laugh at Micah Richards after Man City collapse
Next Page