A leader of men.

Paul Pogba declared, ahead of the World Cup, that this was his time to 'take the reins' of the French team. Following a season of highs, lows and criticisms with both Manchester United and France, it seemed like a bold claim.

The 25-year-old backed those words up no end, by helping his team to their second World Cup win and netting in the final.

Following France's 4-2 win over Croatia in the final, Pogba told reporters of his speech to the squad before the game. He commented:

"So guys, we can do this. There are two teams and a cup and we are not going to let another team take this cup. That is all I told them." 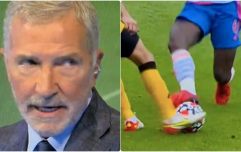 END_OF_DOCUMENT_TOKEN_TO_BE_REPLACED

That sort of rousing speech, it seems, was not the first time Pogba addressed the squad in France's dressing room.

Footage has emerged of the Manchester United midfielder rallying the troops at half-time of their quarter final win over Uruguay. With his jersey off, Pogba stood up and declared:

"It [this game] is done! There's no turning back. It's done.

That, of course, was a reference to the final being in Moscow on July 15. France were leading 1-0 at the time and put the result beyond doubt when Antoine Griezmann scored after 60 minutes to make it 2-0.

Onward to a semi-final win over Belgium and victory over Croatia in the final. 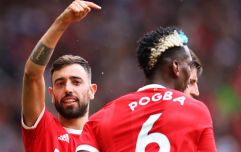 END_OF_DOCUMENT_TOKEN_TO_BE_REPLACED

We are sure similar words are spoken in dressing rooms the world over, at every level of the game, but Pogba and his teammates went out and backed up those words with clinical, professional performances.

These quotes, and this footage, just add to the legend.


popular
The most Stone Age tackle you've ever seen gets South African lock straight red card
Galway fans' frosty reception for Davy Fitz doesn't make any sense
"Johnno went, 'We’re not moving! You're trying to mess us about!'" - Ben Kay recalls red carpet controversy
Ryan Manning hacked to the ground by Henri Lansbury in ruthless assault
"Some of the generals wanted me executed" - Irish rugby legend on flag caper that went wrong
Neil McGee hasn't worked in eight weeks after back injury but still won't rule out championship return
'Brian was a genius... he would've killed you to even win a game of touch'
You may also like
1 month ago
Rio Ferdinand hints at double standards in treatment of Harry Kane &amp; Paul Pogba
1 month ago
Paul Pogba might leave Man Utd. No, *really* this time
2 months ago
Adrian Rabiot's mother clashing in the stand with the Pogba family as French fall-out continues
2 months ago
Roy Keane had plenty to say after France stunned by Switzerland
2 months ago
Heineken will no longer appear in front of Muslim players after Pogba causes rule change
2 months ago
Paul Pogba is bossing another major tournament and showing United what they need to do
Next Page