Steer clear of Hulk and Hulk Jr. after the insipid football fare served up in Dublin 4 this afternoon.

While much of the focus at the Aviva Stadium, today, was on the England supporters and what they would, or would not, chant.

The real story, however, was brewing amid the Irish fans.

An Irish Bruce Banner and his young buddy were perhaps so enraged at the football friendly bore-fest and hulked up, much to the internet's delight.

Jason O'Hanlon alerted us to the [possibly body-painted] heroes via Facebook. 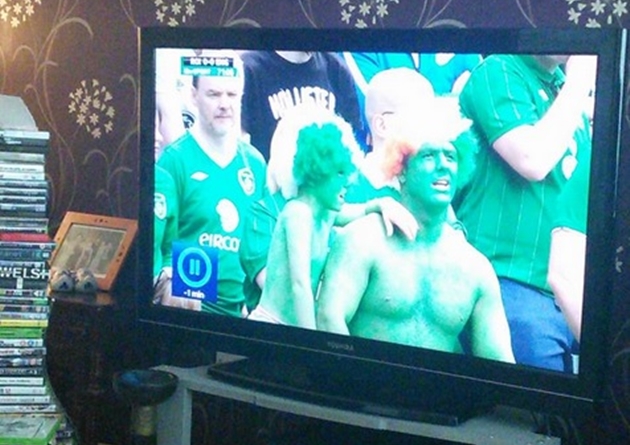 Andrew Tinkler was on the same, amazing page.

@BBCSport The Incredible Hulk and their kids don a pair of Irish Tricolour #IREvENG pic.twitter.com/cLwTvAz9DV

Top quality work all round.


popular
Specsavers troll former Liverpool star for Darwin Nunez headbutt claim
“Players flourished when Roy Keane left” - Rio Ferdinand on why Keane was a 'detriment' to Man United
"To be able to call myself the fastest man in Irish history is just amazing" - Olatunde overjoyed after record-breaking run
The moment Israel Olatunde realised he qualified for the Euro 100m final is what it's all about
Jurgen Klopp reacted like everyone else to Darwin Nunez headbutt red card
Jamie Carragher on the three Man United players Erik ten Hag can't trust
Wexford, Waterford and Kilkenny down some good men as Australia calls
You may also like
4 weeks ago
Stephen Kenny son's Eoin named in Northern Ireland's Under-18 squad
1 month ago
Troy Parrott reveals Antonio Conte advice as clubs line up for Ireland forward
1 month ago
Ireland forward Aaron Connolly linked with shock transfer to Serie B side
1 month ago
Ireland youth player Thomas Hill makes appearance for Liverpool in Man United friendly loss
1 month ago
Wolves set to break Irish transfer record to sign Nathan Collins
1 month ago
Burnley interested in signing Ireland midfielder Jason Knight from Derby
Next Page