Phil Jones and Chris Smalling didn't do a lot right against Newcastle United on Sunday.

Manchester United lost 1-0 at St James' Park, and their central-defensive duo had an afternoon to forget, particularly Smalling. The England defender dived near the half-way line in the second-half, and received a booking for simulation. From the resulting free-kick, Newcastle scored a well-worked goal when Matt Ritchie smashed the ball past David de Gea.

None of Jose Mourinho's players did well on the day, but much of the scorn from United fans has focused on Smalling and Jones. United have now lost their last two Premier League games away from home, and their two central defenders have made high profile mistakes. Jones scored an own-goal against Tottenham at Wembley two weeks ago, and Harry Kane dominated both players.

The pair aren't playing well, but Phil Neville's criticism of them on Match of the Day 2 on Sunday night was peculiar. Neville managed to criticise the only thing the pair didn't do wrong, which is some achievement given how poor they were on the day.

"Manchester United have got the best defensive record (in the Premier League) because they've got the best goalkeeper in the world, they've got Matic sat in front that protects them really well, but the last two (away) games, Smalling and Jones have had a disaster," Phil began.

"Against Dele Alli and Harry Kane they got bullied. Today, did they make many mistakes? No, but they created a nervousness and a tension. They were making decisions that were strange."

Jones and Smalling did seem nervous and tense. They also made some strange decisions - well, Smalling did when he decided to dive. But Neville wasn't just referring to that brain fart from the defender. No, according to the coach of the England women's team, Jones and Smalling failed to "take responsibility on the ball", and he highlighted their positions when United were in possession as an example of this.

“The thing that I noticed today was that they didn't take responsibility on the ball," Neville said.

"They were sloppy on the ball. Phil Jones is on the ball now, he passes it back to the 'keeper. Now, (you are a) modern-day centre-back, split, go wide, make an angle for David de Gea. Both of them didn't take responsibility, didn't create an angle for De Gea, and he has to go long."

END_OF_DOCUMENT_TOKEN_TO_BE_REPLACED

However, here's the thing, Phil - they were following their manager's instructions.

Mourinho doesn't trust either player in possession, particularly Smalling, and he admitted this during a lecture last summer. The United manager spoke about his tactics for the team's Europa League final victory over Ajax, and a key point was not allowing Smalling to pass from the back. He also picked Smalling ahead of Jones for the match, signifying how much faith he has in Jones' ability on the ball.

"With these feet we're not going to play short," Mourinho said about Smalling.

England manager Gareth Southgate also dropped Smalling from the squad last November because he doesn't think he is comfortable enough on the ball to pass from the back. So, why is Neville criticising Smalling for something that he was instructed to do? Mourinho didn't want him to "take responsibility" against Newcastle, as he evidently doesn't trust him in possession. And he clearly has a point.

Yet, Phil was critical of Smalling for following his manager's orders.

He also claimed the pair were at fault for not giving De Gea a passing option, which meant he was forced to kick the ball long.

"Both of them didn't take responsibility, didn't create an angle for De Gea, and he has to go long." 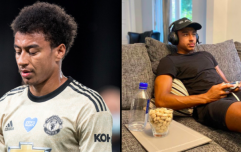 END_OF_DOCUMENT_TOKEN_TO_BE_REPLACED

United aren't a "long-ball" side, but De Gea does kick it long more often than many 'keepers in the division, particularly those in the top half. So, it's not as if Jones or Smalling were at fault for him hitting it long on Sunday, as it is a tactic used by United.

Neville continued to get it wrong, highlighting another example of the pair's apparent unwillingness to "take responsibility" - or, "following my instructions", as Mourinho would call it.

"Now, Chris Smalling, you take responsibility, you go into the space, there's only one centre-forward up there now. Don't let Michael Carrick come into that space, let him receive it into midfield. I just felt all game that there was a nervousness, a lack of confidence with them both."

Smalling and Jones did appear nervous in the game and they were clearly struggling for confidence. But it makes no sense to criticise them for passing to Michael Carrick rather than to each other.

If John Stones, Gerard Pique or Leonardo Bonucci took up the positions Smalling and Jones did against Newcastle, if they allowed their 'keeper to kick it long and if they didn't create an angle for a pass, if they didn't "take responsibility", then one could be critical. They play for teams which build from the back, and they're all extremely comfortable in possession. Mourinho's United don't build from the back like Barcelona, and Smalling and Jones aren't capable of doing this.

That's why Mourinho doesn't want either to "take responsibility", that's why they allow De Gea to kick it long and that's why they don't take up positions to receive the ball and play from the back. Neville's criticism of them for doing exactly what they're told to do, and knowing their limitations, was really strange.


popular
"When Sean Boylan was around, you didn’t need a psychologist or a counsellor - he did it all himself"
The SportsJOE 12 o'clock quiz | Day 136
The daily diet of Manchester United midfielder Jesse Lingard
COMPETITION: Answer this survey for a chance to win a fabulous stay at the Trident Hotel in Kinsale
James Ryan's misfortune opens Leinster and Ireland doors for Ryan Baird
The diet of a modern day rugby player compared with a top jockey
A starting XI of the best free agents available this summer transfer window
You may also like
1 week ago
"I was the monkey on his back, all the time" - How Clough handled Keane
2 weeks ago
'Cristiano Ronaldo broke David De Gea back in 2018'
3 weeks ago
Victor Lindelof is 90% perfect, but it's the rest that kills you
4 weeks ago
"Luis Suarez made a big mistake and we, as a club, got it wrong" - Jamie Carragher
1 month ago
'Pogba seems to really appreciate having someone in there who's taking the limelight'
1 month ago
Uncomfortable truth about Roy Keane swipes at De Gea and Maguire
Next Page