There may be mixed messages but Pep's not backing down

The fan reaction after Manchester City manager Pep Guardiola called on fans for improved attendance at games wasn't exactly in line with the usual adoration he has received in his five years at the club.

However, despite the backlash to the backlash, Pep isn't budging on the issue and ahead of both future Champions League games and their next Premier League game this Saturday, he's made it clear he won't apologise for the comment either.

"I'm not going to apologize for what I said - I was honest."

Pep Guardiola has responded to criticism from #MCFC fans after he asked for more fans to attend matches at the Etihad Stadium, with there being more than 15,000 empty seats for their #UCL clash on Wednesday. pic.twitter.com/ucXQ5utJo4 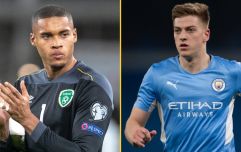 END_OF_DOCUMENT_TOKEN_TO_BE_REPLACED

After a journalist brought up Kevin Parker, the General Secretary of City's official supporters' club, and his own comments - namely that he should "stick to coaching" and that he "doesn't understand the difficulties" fans face, the 50-year-old clarified his own words.

He defended himself, claiming that he did not say he was "disappointed because the stadium was not full" and while it may have been interpreted that way, he is "not going to apologise" for what he said.

END_OF_DOCUMENT_TOKEN_TO_BE_REPLACED

Moreover, he went on to say that although he was "surprised" by Parker's response, it was not the first time he has faced such circumstances, alluding to instances during his time at Barcelona.

The Catalan coach insisted: "What I said is that we would love, because we need it, is their support", doubling back to say that "it doesn't matter how many people come, but I would like to invite them to enjoy another game like the last one".

City play Southampton this weekend as Pep was quick to point out. They have had a full week to prepare for the game and he wants the Citizens to be there as he knows "how difficult it will be".


popular
Patrick Vieira appears to kick fan after Everton defeat
Rangers legend says he and Roy Keane didn't speak during Man United spell
Rory McIlroy response to doubters on his final hole was such a relief
Your guide to a huge weekend of sport and how to watch it all
The coolest customer in hand-ball hoping to carry on the family tradition for Kilkenny
Chris Sutton praises and throws subtle dig at Rangers after Europa League final loss
Boris Johnson slams Jurgen Klopp for defending Liverpool fans booing national anthem
You may also like
6 days ago
Everton weigh up transfer move for Ireland star Gavin Bazunu
6 days ago
Pep Guardiola tears into Dimitar Berbatov and Patrice Evra with Barcelona jibe
1 week ago
Erling Haaland: Man City contract contains huge release clause
1 week ago
Chelsea decided against Erling Haaland transfer after scouts 'raised concerns'
1 week ago
Wayne Rooney takes aim at Paddy Kenny's goalkeeping in Man City title win
1 week ago
Pep Guardiola hits back at Patrice Evra for 'no personality' claim
Next Page