In case you didn't know, Paul Pogba and Romelu Lukaku are best mates. 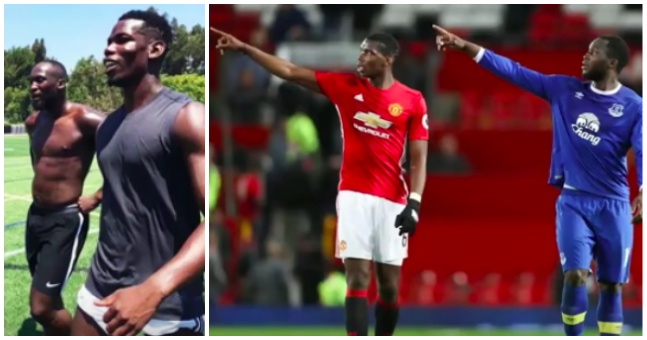 END_OF_DOCUMENT_TOKEN_TO_BE_REPLACED

The pair regularly holiday together and clearly have a great rapport and mutual respect. Both are 24 years old, both are worth millions and millions of pounds, and both have the world at their very gifted feet.

Perhaps vitally, they also happen to have the same agent in Mino Raiola. The pair have been hanging out together in LA (where Lukaku had something of an altercation with the police) and that has led to speculation that Manchester United's midfield gem was instrument in getting Everton's powerhouse striker to move to Old Trafford.

Now it's obvious that Pogba would have been privy to the movements of his bestie, but that didn't stop the pair acting out a skit in front of the camera to celebrate the Belgian's big money transfer.

END_OF_DOCUMENT_TOKEN_TO_BE_REPLACED

Lukaku is seen approaching a chilling Pogba, casually saying "See you tomorrow in training", to which the Frenchman incredulously replies "What?! Are you serious?!" and Lukaku responds: "Yes! Training tomorrow!"

It's quite obviously staged but how can you not love to ecstatic mates enjoying their special moment?


popular
QUIZ: How many of the 10 most successful football counties can you name without making a mistake?
Conor McGregor and Floyd Mayweather 'in talks' about a rematch
Éamonn Fitzmaurice explains Aidan O'Shea's best position and how it can be used against Kerry
Matt Le Tissier says he asked Sky Sports why they never sacked Jamie Carragher
Patrick Vieira claims he was 'much better' than Roy Keane in new interview
Steve McClaren issues warning to Man United players
Two All-Ireland quarter-finals to be streamed exclusively live on NOW
You may also like
1 day ago
Man United transfer troubles continue as Erik ten Hag's budget is 'capped'
1 day ago
Zinedine Zidane explains why he would never manage Man United
1 day ago
Steve McClaren issues warning to Man United players
2 days ago
Richard Arnold: A behind the scenes look at how Man United fans' unlikely meeting with the CEO happened
3 days ago
Christian Eriksen reportedly becomes latest player to turn down Man United
3 days ago
Rio Ferdinand on the four Man United players who could be sold this transfer window
Next Page