"They're disappointed they didn't win it. We had the better goalscoring opportunities."

Stephen Kenny's words told the story of the Tallaght night. Winning games, big performances and plenty of plaudits - that's what these Ireland under-21s have grown up on - and they expected to win on Thursday night.

Never mind that it was Italy, one of the best football nations out there, because there's no inferiority complex about Ireland underage teams anymore. Certainly not this team. And there's good reason for that.

In what was a high class affair in Dublin 24, Ireland had the edge. They had the lions share of chances and with Jayson Molumby and Conor Coventry bossing it in midfield, were dominant in possession too. 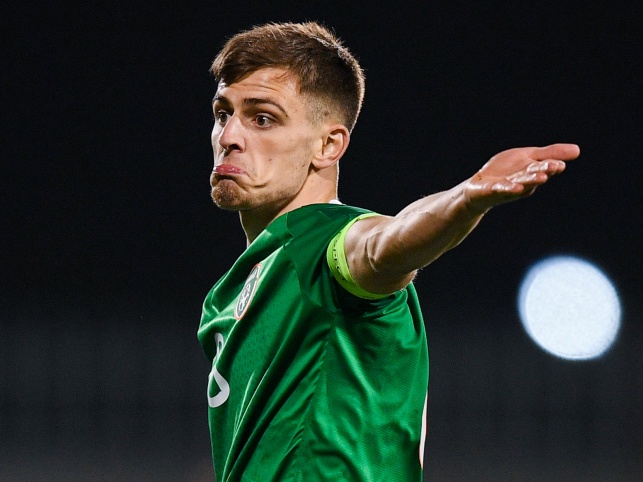 Behind them, West Brom youngster Darragh O'Shea was safe as a house with the 20-year-old's composure in possession and general calmness a real source of leadership for this team.

And then you've the lads who make the magic happen. For 62 minutes, Troy Parrott and Adam Idah were a joy to watch in front of the packed crowd.

With both knowing their roles and complimenting the other sublimely, it's a pairing we could get used to. Idah is the out and out forward. A real menace up top, the Norwich city man is a former sprinter with Leevale AC and he has the pace and power to make any defender worry. What he also has is a deft first touch and an innate willingness and ability to hold up the ball and link up play.

See some of the highlights from his night here. A target man, a linchpin.

The young Cork man has it all.

Pace ✅ A former sprinter with Leevale AC
Skill ✅ His first touch and hold up play was immaculate last night
Power ✅ The Italian defenders couldn't contain him.

END_OF_DOCUMENT_TOKEN_TO_BE_REPLACED

That's where Parrott, who plays in a more reserved, number ten type role comes into play. The Dubliner has a brilliant spacial awareness that allows him to ghost by would be challengers with consummate ease. As we're all well aware at this stage, his finishing is top notch too.

Unfortunately for him, a terrible refereeing call brought his night to an early halt. Parrott's dismayed reaction told a story in itself but in games like these it's all about the development of players and the performance, and Stephen Kenny seems to be onto a good bunch.

How Troy Parrott was sent off for this God only knows.

He had a brilliant game for the 21s last night though and can hold that head high 🇮🇪pic.twitter.com/OWlJQHljmx

"The players are in there feeling they left it behind," said Kenny to eir Sport afterwards.

"We've come a long way in a short time when the players are disappointed to draw with Italy."

There are bright days ahead.


popular
Dublin club Man O'War suspends all training and matches after positive Covid-19 test
Roy Keane on the experience of being managed by Jack Charlton at USA 94
"Never back against the Irish" - How the BBC covered our USA 94 win over Italy
Jack Charlton's role in getting Roy Keane to Manchester United has been revealed
"Ah Jesus Brian why didn't you tell me?" - the GAA's youngest Millennium Men
Max Holloway's class gesture after controversial UFC 251 loss transcends the sport
The SportsJOE 12 o'clock quiz | Jack Charlton special (Day 112)