In football, more often than not, what goes up will eventually come down.

We've lost count of the number of times a player has risen to prominence and become flavour of the month, only to fall away as quickly as he made it to the top.

Last year, it was the turn of Will Grigg.

The Wigan striker helped the club back up to the Championship and travelled to Euro 2016 with Northern Ireland, where a song about him was inescapable for a solid month.

Before Will Grigg's On Fire, there was Freed From Desire https://t.co/5FjFAqiwxK

But Grigg didn't play at that tournament, let alone score, and after a steady start to the current campaign the goals have dried up yet again. 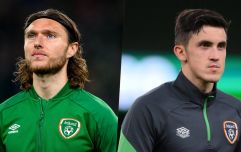 END_OF_DOCUMENT_TOKEN_TO_BE_REPLACED

The former MK Dons frontman has five league strikes to his name this season, but none in his last 15 Championship outings.

This stat was brought up during another goalless outing as Wigan fell short against Sheffield Wednesday, and more than a few people recognised that the 25-year-old is well and truly no longer on fire.

The general jist of twitter tonight is that Will Grigg isn't on fire. He is in fact a fading ember #swfc #latics

Still, just because Grigg isn't still on fire doesn't mean defences up and down the country aren't terrified. After all, Wigan can still produce goals from elsewhere.

What's that? They're the lowest scorers in the Championship with 24 goals in 28 games? Oh.