Did Rafa Benitez actually do any better than Steve Bruce?

Steve Bruce is under pressure. That much is obvious. After Newcastle United's 1-0 loss to Sheffield United, fans brought out the virtual pitchforks, calling for his sacking. Club legend Alan Shearer wrote that watching them hurt his soul. And it's understandable, Newcastle are by any measure the worst team to watch in the Premier League, especially in the absence of Allan Saint-Maximin.

But, is this season any worse than the previous nine? Why is Steve Bruce getting a harder time than his predecessor, Rafa Benitez?

In short: Benitez gave them hope.

Speaking on Monday Night Football, Gary Neville went on a passionate rant, not in defence of Bruce, but looking at the broader picture at Newcastle, saying their fans had been "served dire tripe for about ten years."

"The unhappiness towards this manager is embedded, just from the history, rather than from who he is or the job that he's doing," he said.

"Looking between Rafa Benitez and Steve Bruce, I don't see any difference," he said, before comparing their respective points records.

"In [Benitez's] first season, he got 44 points. In his second season he got 45 points and last season Steve Bruce got 44 points. He's matched him for points," Neville said. 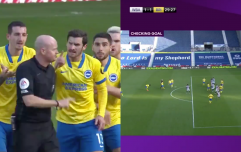 END_OF_DOCUMENT_TOKEN_TO_BE_REPLACED

After emphasising that their points return is effectively the same, Neville said: "What Benitez has is a fantastic PR company, people like Jamie [Carragher], and he had a wonderful rapport with the fans because he got them out the Championship and he stuck with the club so he demonstrated loyalty."

"He gave them hope but the football was awful," he added.

"My point is, this is something that is culturally set at Newcastle United. It is not a Steve Bruce problem.

"Newcastle have got a cultural problem where the football expectation up there is attacking, enthralling, thrilling football for the fans who are passionate about the club, and they've been served up dire tripe for about ten years."

"The ownership and the executive at that club have not delivered that football to these fans for years and years.

"I get demoralised when I go to Newcastle, I should be inspired."

Watch the full discussion below.


popular
Referee Mathieu Raynal puts Sexton in his place after TMO mess
Sexton compares "brilliant" Irish debutant Craig Casey to Jonny Wilkinson
Tadhg Beirne now delivering what so many of us knew he was capable of
The SportsJOE 12 o'clock quiz | Day 308
Will Connors locks down No.7 jersey with two rapid succession plays
"I was like, ‘My ear is hanging off my head. Can you not see that?!'"
Owen Farrell rages at referee Pascal Gauzere as Wales catch England sleeping