Neville gave another blunt assessment of the club after United's lacklustre draw with Leciester.

Gary Neville says he suspects Manchester United's next manager could be named in the coming days after his former club turned in another lacklustre home performance against Leicester on Saturday afternoon.

Erik ten Hag and Mauricio Pochettino have been strongly linked with being appointed the permanent successor to Ole Gunnar Solskjaer at Old Trafford in time for the start of next season, with the Ajax manager appearing to be most likely to take the role as things stand.

END_OF_DOCUMENT_TOKEN_TO_BE_REPLACED

Ralf Rangnick was appointed as interim manager at United after Solskjaer's dismissal and oversaw another disappointing performance in the 1-1 draw with Leicester on Saturday evening - a result which means any faint hopes of the club scraping a top four finish are all but mathematically over.

Neville delivered another blunt assessment of United's performance on Sky Sports, before adding he believed an announcement about the next manager could now be accelerated.

END_OF_DOCUMENT_TOKEN_TO_BE_REPLACED

"Because the interview process started seven to ten days ago, I said you've got to conclude it quite quickly or it becomes a bit of a mess.

"There were already reports earlier in the week that Ten Hag was awaiting details as to whether he was going to be offered a contract or not.

"I suspect after that performance today what we'll see is a PR spike this week and an approach where the manager might be named.

"I don't know but for me it wouldn't surprise me."

🗣 "I suspect after that performance what we'll see is that a manager might be named..."@GNev2 feels Man Utd could speed up their process of naming a new permanent manager following the draw with #LCFC 👇 pic.twitter.com/AK1MCp7mwh

Neville points finger at Glazer family for 'lack of direction.'

Neville went on to say how the "flat" performance stems from the lack of direction the players have from the very top, again pointing the finger of blame at the Glazer family.

"The owners have had ten years post Sir Alex Ferguson to try and sort this out," he added.

"Ultimately there needs to be something culturally that shifts at this football club to make it a football project." 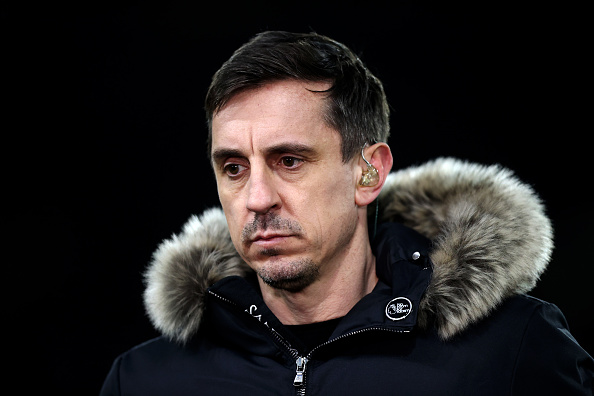 United fell behind to a Kelechi Iheanacho header in the second half at Old Trafford but were able to find a quick response through Fred's equaliser.

The Brazilian's goal failed to bring a shift in momentum though, and Leicester looked to have re-taken the lead through James Maddison in the closing stages.

This, however, was ruled out for a foul on Raphael Varane in the buildup, with Maddison telling Sky later he felt the defender had gone down too easily.