Netflix has added another must-see football series, this time on the World Cup

If, like many a football fan, you've used the Christmas break to binge-watch the excellent Sunderland 'Til I Die in its entirety and are now at a loss as to what to watch next, fear not - this should help fill the void.

Netflix has released another football documentary series, this time about the World Cup. 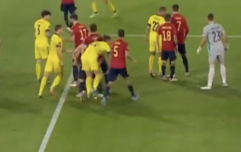 END_OF_DOCUMENT_TOKEN_TO_BE_REPLACED

Becoming Champions, which is available to watch on Netflix now, takes a look at the stories behind the players and countries that have won the World Cup.

Made up of nine episodes, the series takes an in-depth look at each nation to have won the tournament with episode five - 'You only win once?' looking at England's triumph on home soil in 1966. Interviews with several World Cup winners - including Lothar Matthäus, Rivaldo and George Cohen - feature throughout the series.

🇺🇾🇮🇹🇩🇪🇧🇷🏴󠁧󠁢󠁥󠁮󠁧󠁿🇦🇷🇫🇷🇪🇸
Only eight countries have ever won the #WorldCup. A new series on Netflix called "Becoming Champions" looks at the stories behind those teams. Perfect holiday viewing! 📺🤶🎅pic.twitter.com/DRCCbxyc7X

Looks good, doesn't it? The perfect excuse to lie on the couch, stuff your face with a few more chocolates from the Christmas tub, and waste away another day or two until the new year.

This is just the latest football documentary to land on Netflix. As well as the recently released look at Sunderland, they have also made behind-the-scenes series on Juventus and, more recently, Argentinian club, Boca Juniors.


popular
From Canada to Carlow in the name of hurling: Nicolas Redmond's journey to the Fitzgibbon Cup
Kerry's captain selection for 2022 sums up the problem with their outdated system
"It must be difficult to say no, having won a game and heading back together"
Eddie Jones shares great tale on hour-long chat with 'inspirational' Roy Keane
Chelsea forced to change Stamford Bridge changing room after Liverpool complaint
Ireland fitness update offers even more reason for Six Nations optimism
Jesse Lingard 'angered by lack of respect' shown by Man United
You may also like
2 months ago
Will Keane's story about his Irish roots is one worth listening to
3 months ago
FIFA to look at preventing teams from competing in consecutive World Cups
3 months ago
'The perception of time has changed': Wenger justifies biennial World Cup plans
4 months ago
Premier League clubs agree on calendar ahead of 2022 World Cup
4 months ago
FIFA invite FAI to discuss proposal of hosting World Cup every two years
4 months ago
Katie McCabe believes that equal pay deal with FAI "doesn’t add pressure"
Next Page