Nemanja Matic deserves credit for assessment of his Everton performance

Nemanja Matic received a rating of 0/10 from Manchester Evening News following his side's 4-0 loss to Everton.

In his assessment of the Serbian's performance in the Manchester United midfield, Samuel Luckhurst wrote:

'Played as though quick sand was beneath the pitch. Pedestrian throughout.'

Following the game, United's heaviest defeat in three years, Matic came out and admitted he was one of the main players to blame for the "shameful" performance, and loss.

Former United defender Gary Neville lamented, after the game, that Everton's starting XI had out-run Ole Gunnar Solskjaer's team by four kilometres in the first half. United were out-worked, out-foxed and out-classed by The Toffees and that was starkly demonstrated with Gylfi Siggurdson's 28-yard strike, which made it 2-0.

United spurned possession in midfield and were completely lacking in shape as they got back. Diogo Dalot was covering centre-half but he, inexplicably, drifted out of the picture as Chris Smalling ran back and showed no interest in blocking Siggurdson.

Perhaps Dalot expected Matic to get closer to the Icelandic international and pressure him. As it was, one step inside flummoxed Matic and gave Siggurdson the freedom of Goodison Park to shoot. And shoot he did.

David De Gea should have saved the shot but he was just as complicit as Matic and Dalot in his side falling 2-0 behind. 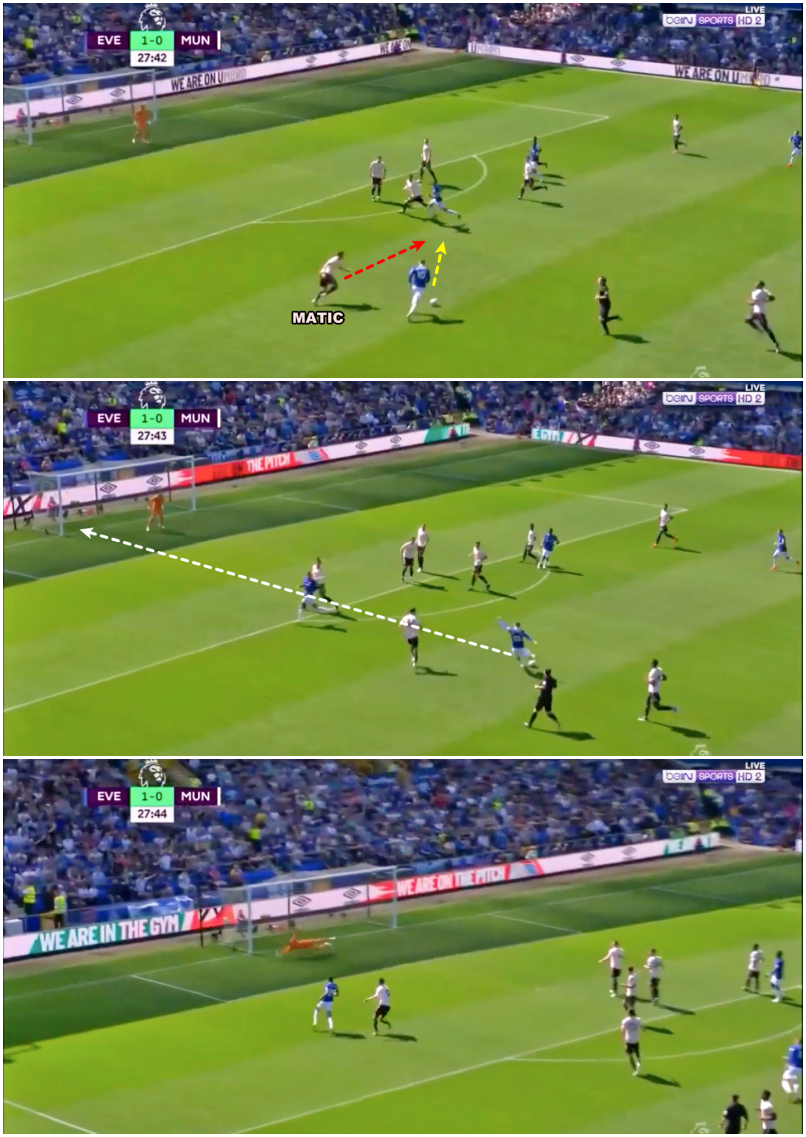 Following the game, Matic told beIN Sports, "It's one of the worst games for me personally, and for the team.

"I think we deserved to lose. We did not play how we wanted to play. It's hard for me to speak about. It’s not for the young players. I’m one of the most senior players. If anyone is to blame for this it’s me.

"When you win the battle in midfield it's easier to play. We didn’t do that today."

END_OF_DOCUMENT_TOKEN_TO_BE_REPLACED

The 30-year-old won two Premier League titles at Chelsea but has struggled to impose himself as a midfield enforcer, and defensive shield, for United. His first season at Old Trafford was decent but he has been a step, or two, off the pace in the current campaign.

"It’s shameful," Matic continued. "We have to look for the mirror, everyone has to see where he made mistake and what he must do better.

"The more guilty are the more experienced players and in this case it’s me.

Matic deserves credit for stepping forward to take his share of the blame, but there is plenty of it to go around. United fans will appreciate him holding his hands up.

Up next for the midfielder and United is a league clash with neighbours Manchester City at Old Trafford on Wednesday.

popular
The SportsJOE 12 o'clock quiz | Day 145
Leinster star Hugo Keenan has beaten Beauden Barrett's 'Bronco' time
"No doubt he'll say he played shit like he normally does, but I thought it was a good game."
300/1 winner makes history at Leopardstown
QUIZ: Beat the clock to name the Premier League assist kings
The SportsJOE 12 o'clock quiz | Day 144
Portumna prodigy streaks to eight shot Irish Boys win with bogey free round
You may also like
1 week ago
All hail Alexis Sanchez, the man who played Manchester United like a piano
1 week ago
Jadon Sancho to earn eye-watering salary at Manchester United
1 week ago
The daily diet of Manchester United midfielder Jesse Lingard
2 weeks ago
"I was the monkey on his back, all the time" - How Clough handled Keane
3 weeks ago
'Cristiano Ronaldo broke David De Gea back in 2018'
4 weeks ago
Victor Lindelof is 90% perfect, but it's the rest that kills you
Next Page