You'd think that Neil Warnock would be a reasonably happy man after Cardiff's 2-0 over Bournemouth on Saturday, a hard-earned three points against a good Eddie Howe side that could prove crucial for the Bluebirds given their current standing at the tip of the relegation zone.

Well he wasn't. Or at least, he didn't appear to be during a video that was captured with Warnock initially unaware the cameras were actually rolling.

In it, in which he appears to be preparing for a post-match tunnel interview, he says:

"Match of the Day? Tell Gary Lineker to f**k off. Oh, have you caught that on camera? He called me Colin. Can I say 'I'm Colin here'. You don't know why I'm Colin do you? Right." 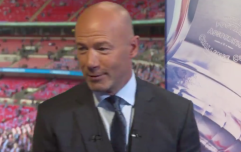 END_OF_DOCUMENT_TOKEN_TO_BE_REPLACED

For those unaware, Warnock has the rather unfortunate nickname of 'Colin' because of the oft-cited anagram of his actual name: 'Colin Wanker'. And as you can see from the clip, the interviewer was wise enough to interrupt Warnock before he was forced to explain the name's origins himself.

There isn't much else to add to this, it's just Colin... sorry, Neil, Warnock being extremely, unapologetically Neil Warnock. This is what he does and this is why we love him*.

Still, let this be a lesson to Gary Lineker and the team at Match of the Day: Nobody calls Neil Warnock 'Colin' and gets away with it.

*love him in the same way we love running our tongues over an ulcer. It hurts, of course it does, but it is still weirdly comforting? Right? Why do we do that? It's mental. Like our unconditional love for Neil Warnock.