God knows we could do with him.

Ireland have a new breed of strikers coming, in Troy Parrott, Michael Obafemi and Aaron Connolly but it will be a few years yet before those lads (all still under-20) hit their peaks.

One man who is closer to the peak of his powers is 25-year-old Leeds United striker Patrick Bamford who qualifies to represent us through a maternal grandparent.

Clutching at straws we know, but we're not in the position to turn our noses up at a player of his quality and that's why he's been on the radar for quite a while now.

Ever since representing Ireland at under-18 level back in 2010, Bamford has consistently been linked with making the move across the water seeing as he has not yet played for his native England at senior level. 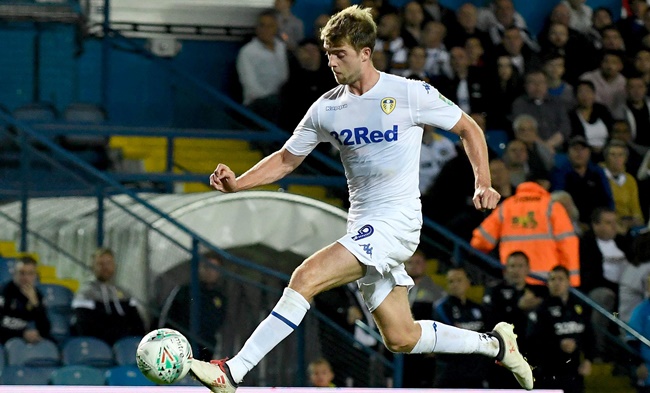 Martin O'Neill talked him up last year and though he didn't lure Bamford over, the rumour-mill kept on going and according to the Irish Independent, new Ireland manager Mick McCarthy is going to give it a lash now.

Bamford, it must be said, has all the shapes of a player who'd be worth the hassle. He ripped it up for Middlesborough in the Championship last year, scoring eight goals in the space of five games at one stage and that blistering form meant Leeds United had to fork out £7 million to bring him to Elland Road.

END_OF_DOCUMENT_TOKEN_TO_BE_REPLACED

An untimely injury shortly after his arrival to Leeds has meant he hasn't really got a chance to prove his worth there yet but he returned at the weekend and he returned with a bang, scoring the only goal in his club's 1-0 win over Bolton.

That came just days after he scored a hat-trick for the club's under-23s on his first appearance back.

With pace to burn and a keen eye for a goal, he's exactly the type of player we need with Shane Long's form still patchy and with Scott Hogan usually on the bench for Villa.

This stunner, from training a couple of months ago shows the type of sharpshooter we're dealing with.


popular
Carragher pushes all the right buttons and Keane delivers in gold
Guinness Pro14 Preview: Edinburgh v Connacht
"Anyone less belligerent would have backed down..."
Baz & Andrew's House of Rugby - Live in Dublin with Scott Fardy and Fiona Coghlan
QUIZ: How well can you remember this season's Premier League results so far?
Jermaine Jenas' reaction to Eamon Dunphy punditry is absolutely hilarious
Ashling Thompson's gym routine features four handy exercises
You may also like
1 month ago
Mick McCarthy talks up Idah and Irish ears are burning
1 month ago
Republic of Ireland team of the decade
1 month ago
Can you name the 50 Irish players to score 5 or more Premier League goals?
3 months ago
Kenny plays down half-time speech as Sweden stunned by Irish comeback
3 months ago
'I don't see what Jeff Hendrick did that Jack Byrne couldn't have'
3 months ago
Mick McCarthy and the value of players who do as they're told
Next Page