We reckon Manchester United supporters will have a thing or two to say about that.

Lionel Messi is catching flak from all angles after failing to make an impact in Argentina's opening pair of World Cup fixtures.

Argentina are in genuine danger of missing out on a spot in the knockout stages and in dire need of a victory against Nigeria if they are to give themselves a chance of progressing into the last 16 of the competition.

Given the stunning performances put forward by Messi's perennial rival Cristiano Ronaldo for Portugal in the past seven days, plenty of criticism has been aimed at the Argentine captain.

Granted, Messi has flattered to deceive in Russia but one of the most bizarre examples of analysts ridiculing the Barcelona superstar came via Canadian pundit Sid Seixeiro, who somehow found a way to drag Michael Carrick and Darren Fletcher into his argument.

The crux of Seixeiro's point was that Ronaldo was able to flourish in a Manchester United side that didn't have the quality of Messi's Barcelona side a decade ago which, according to the co-host of Sportsnet TV's Tim & Sid Show, proved that the Portuguese superstar is a much better player.

"And the best players I've ever seen in my life can play with anybody.

"Cristiano Ronaldo can play with anybody. Michael Carrick sucks! Darren Fletcher sucks! I'm making a point that Ronaldo didn't have Xavi or Iniesta. 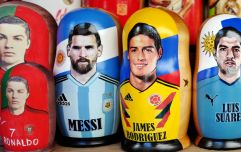 QUIZ: Name the 13 men who have played with Messi AND Ronaldo

END_OF_DOCUMENT_TOKEN_TO_BE_REPLACED

"Zinedine Zidane could play with anybody and he did it constantly for Juventus, for France, for Real Madrid."

Everyone's obviously entitled to their opinions but claiming that the likes of Carrick "sucks" is probably a bit of a leap to make. Seixeiro has opened himself up for healthy derision with that guff.