There has been a concerted effort on Martin O'Neill's part to pump new blood into his Ireland set-up.

It was needed. The mauling at the hands of Denmark last year laid bare the deficiencies of the current squad and, with several players having announced their retirement since, an injection of fresh ideas was required moving forward into the UEFA Nations League qualifying campaign.

Scott Hogan and Declan Rice made their international debuts in the friendly defeat to Turkey in March, while Derrick Williams and Graham Burke were given their first chance to impress against France in May.

Darragh Lenihan made his bow for the Boys In Green a month later against the United States, setting up Burke's goal in an encouraging display, while there was also a first appearance for Sheffield United left-back Enda Stevens at the age of 27.

And it looks as though O'Neill will continue apace as he prepares for testing away games against Wales and Poland on September 6 and 11 respectively.

While it sounds like O'Neill will wait before he calls upon Ireland U17 starlet Troy Parrott, the former Celtic boss sounded less reticent when it came to Michael Duffy and Callum Robinson.

Duffy has impressed for Dundalk recently. The 24-year-old has represented Northern Ireland at various age levels but has signalled an intention to switch allegiances.

"I think he's an exceptionally talented player. It didn't happen for him at Celtic. He wouldn't be the first young player to have gone over there and not come through.

"He definitely has the ability to go past players, it's nice to see. I've seen him on both types of surfaces - on what I would consider the normal pitches and I've seen him play at Dundalk on the artificial surface.

"He's a definite talent, there's no question about that."

Parrott took a major step forward in his burgeoning career last month when he signed his first professional contract with Spurs https://t.co/nNN1G5HLy6 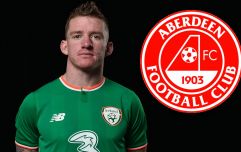 END_OF_DOCUMENT_TOKEN_TO_BE_REPLACED

Duffy joined Celtic in 2015 after three years with Derry City. He failed to make a senior appearance for the Hoops, though, before returning to the League of Ireland with the Dundalk in 2017.

And he's caught the eye for the Lilywhites, with ten goals in the current campaign for Stephen Kenny's table-toppers.

O'Neill also indicated that Preston forward Callum Robinson will soon be involved with Ireland soon. The 23-year-old represented England up to U20 level but will switch to Ireland, qualifying through his Monaghan-born maternal grandmother. The paperwork is delaying Robinson's integration into the Ireland squad.

O'Neill names his provisional squad for the Wales and Poland games on Monday.

popular
The SportsJOE 12 o'clock quiz | Day 140
"There's times I do think I probably have let people down but in fairness, I have got good support from back home"
Only a Champions League fanatic would get full marks in this quiz
Getting 20/20 in our Champions League quiz would be a miracle
Jonny Hayes and Aberdeen teammates apologise after Covid cluster shutdown
Frustration boils over for Shane Lowry at PGA Championship
Robin McBryde on training session that sent message to Leinster's international stars
You may also like
3 weeks ago
James McClean opens up on sickening, Covid-related hate mail
3 weeks ago
Commemorative Jack Charlton t-shirts raising money for those living with dementia
4 weeks ago
When the President interrupted a Euro 88 pint between Charlton and Dunphy
4 weeks ago
How an uncultured Englishman conquered Ireland's sporting heart
4 weeks ago
The SportsJOE 12 o'clock quiz | Jack Charlton special (Day 112)
4 weeks ago
An Ireland XI of players who didn't get the recognition they deserved
Next Page