Manchester United's new third kit has been leaked online, with the club set to ditch their fan-designed grey strip in favour of a navy and gold design.

For the 2018/19 season, United's third kit will be made from recycled ocean plastic as part of adidas' Parley collaboration.

FootyHeadlines, a reliable source of kit information, have provided a sneak peek at what United supporters can expect for the upcoming campaign.

A couple of navy tones make up the main template, with the iconic United badge emblazoned in gold along with the Chevrolet and adidas logos.

Parley's slogan 'For The Oceans' will be printed on the inside collar of the shirt, which will be launched this summer.

Adidas has worked with environmental initiative Parley for several years and the Red Devils' new strip will likely represent the most high-profile project in the partnership to date. 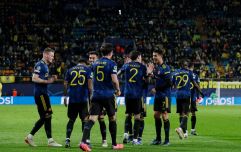 END_OF_DOCUMENT_TOKEN_TO_BE_REPLACED

We know one man who will like the new kit is made from recycled ocean plastic.

"When the seagulls follow the trawler, it is because they think that sardines will be thrown into the sea..."