Reports that the Saudi royal was keen buy the club first surfaced last week, though appeared to have little substance to them.

Despite this, the Mirror now insist there is genuine interest from Bin Salman, who is seeking a meeting with the Glazer family - United's current owners - in the coming weeks to discuss a possible £4bn takeover.

Avram Glazer had been scheduled to attend an International Forum event in the Saudi capital of Riyadh this week but is now said to have cancelled these plans. 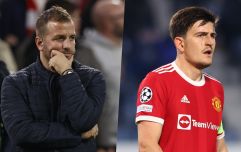 END_OF_DOCUMENT_TOKEN_TO_BE_REPLACED

Talk of a possible takeover of United comes at a time when Saudi Arabia is facing significant international scrutiny over the death of Jamal Khashoggi. The journalist, a critic of the crown prince, disappeared after he was seen entering the Saudi Arabian consulate in Istanbul earlier this month.

Saudi Arabia confirmed for the first time on Friday that Khashoggi had died in a "fist fight" while he was there. This explanation which has been met with scepticism by many - President Donald Trump included.

The Mirror point out that the Glazer family are likely to want a solution to this situation before they enter any form of dialogue over a possible sale.

United have remained quiet on the takeover speculation and there is no indication the Glazers have any intentions of selling the 20-time English champions any time soon. The Americans, who also own NFL side, Tampa Bay Buccaneers, have been in charge since 2005, their £790m leveraged buyout fiercely opposed by many supporters as it immediately saw the club plunged into debt.

A recent article from David Conn in The Guardian pointed out that the club's owners had drained £1bn out of the club in interest, costs, fees and dividends since taking charge 13 years ago.


popular
'Go and get a job' - Ronnie O'Sullivan responds to Shaun Murphy's amateur player comments
BT Sport release statement as Chris Sutton is denied access to Ibrox again
'Joe Schmidt would do wonders with the All Blacks'
QUIZ: Name these 42 Premier League players from the 2000s
"Never mind Plan B, put minors back up to u18" - Conor McManus hits out at new age-group rules
Sean O'Brien praises "unbelievable" Robbie Henshaw after his winning return
Four Ireland stars voted onto Autumn Nations Series 'Best XV'
You may also like
2 days ago
Paul Scholes: Man United 'need the very best' manager in charge
2 days ago
Ibrahimovic tells Manchester United they're living in the past and says Premier League is overrated
2 days ago
Man United players reportedly unhappy with Irish coach's 'school teacher' approach
3 days ago
David de Gea responds to thoughtless criticism to save Man United again
3 days ago
Paul Scholes didn't hold back in his assessment of 'embarrassing' Man United
3 days ago
Mauricio Pochettino plays down Man United links
Next Page