"We are both filled with so much love and excitement looking ahead to the coming months, as we prepare to become parents."

As it turns out, United boss Casey Stoney was forward-planning to be without the experienced Chamberlain for the club's first ever campaign in the Women's Super League. Chamberlain has taken to social media to announce she is stepping away from her playing role as she, and partner Leigh Moore, are expecting their first child. 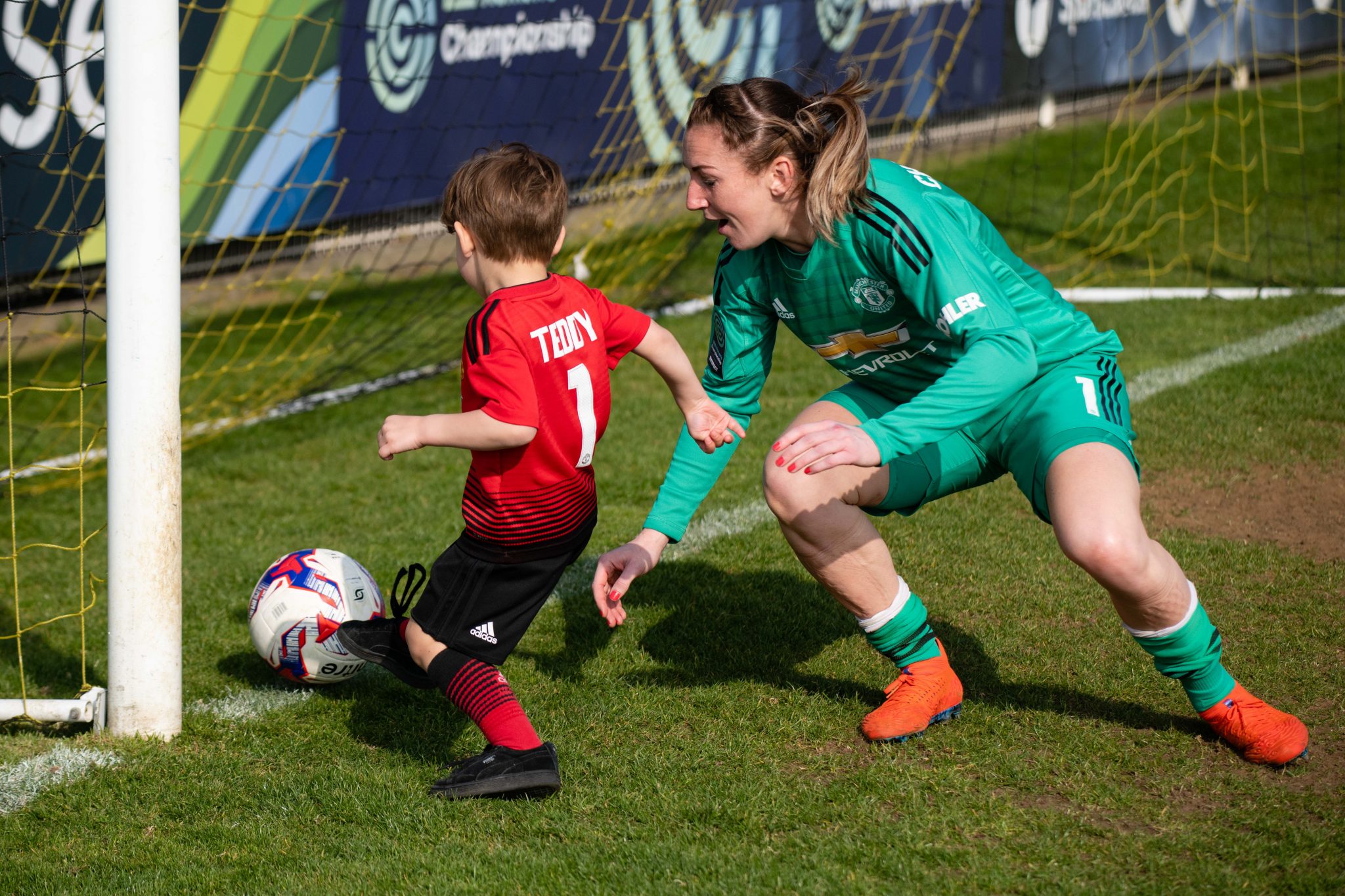 Chamberlain plays with a young Manchester United supporter on the itch after one of her side's league games. (Credit: Getty)

The 35-year-old paid tribute to her club for being so supportive since herself and Moore received the good news. She also stated her intentions to return to football 'better than ever before' at an appropriate time. Chamberlain declared:

'I want to say a huge thank you to Casey and everyone at Manchester United who have been brilliant with me since we received the news.

'I’m going to use the next few months to work on certain aspects of my game both on and off the pitch. I will be part of the squad in a slightly different capacity but, nonetheless, my focus is on helping my teammates as we prepare for our first season in the WSL.

Chamberlain will remain part of the squad in a different capacity, in the coming months, and will assist with preparing the squad's other goalkeepers and analysing the WSL opposition.

END_OF_DOCUMENT_TOKEN_TO_BE_REPLACED

United boss Casey Stoney said, "It’s fantastic news for Siobhan and we are all so pleased for her and Leigh. Siobhan will be fully supported by the club; she is an important player for us both on and off the pitch and we are committed to offering her a programme that suits her needs."

Praise for United comes not too long after American athlete Alysia Montano criticised Nike for not offering maternity leave. Referring to the Montano situation on PlayXPlay, Dublin footballer Niamh McEvoy spoke about teammates with children she has trained and played with:

"I play with a couple of girls who have kids and they are phenomenal athletes and I would never think like that, that it is something marketable, but it is a lovely story.

"Amy Connolly, she's a phenomenal athlete and she is the same age as me, she has a son Caoimhin and she would've sacrificed so much and so much time away from him. She played with us, with Dublin, for a couple of seasons and I think it's an amazing story."

With proper support systems in place, there is no reason why athletes like Chamberlain and Connolly can not return to pursue their sporting dreams.


popular
Conor McGregor demands apology from ESPN pundit over Cerrone comments
Kerry vs. Dublin ends in meleé, and a draw
Two giants rise above the fray
Wexford trailblazers go down but father and son show why club GAA is best
David Clifford leaves Dublin for dead to score sublime goal
"I want to be myself... Imitation's not a great thing, you know?"
Charlton want Troy Parrott on loan until end of the season
You may also like
1 day ago
If Twitter had been around for Eric Cantona's kung fu kick it might have looked something like this...
1 week ago
Teenage sensation Jude Bellingham facing biggest decision of his career
2 weeks ago
Manchester United make smart move for Donny van de Beek
2 weeks ago
"We are Man United"
3 weeks ago
Manchester United have finally broken David De Gea
1 month ago
REPORTS: Erling Haaland arrives in Manchester for talks with United
Next Page