Daniel Levy is rumoured to be wanting £150 million for the England striker.

Remember when Guardiola said it would be "impossible" for Man City to sign a striker to replace Aguero because they were all too expensive?

Well, after splashing a moderate £100m on Jack Grealish, they are now reported to have offered Tottenham another huge cash offer - plus a player - for Harry Kane. 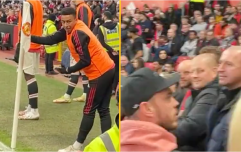 END_OF_DOCUMENT_TOKEN_TO_BE_REPLACED

The reigning Premier League champions have got their sights set on the England man now, but are not willing to meet Daniel Levy's massive £150 million asking price for Kane.

Instead, City are reportedly willing to offer Bernardo Silva to Spurs as part of a deal for Kane. They are reportedly not prepared to pay more than £130 million for the striker but are considering including Silva in any possible switch.

The Portuguese international is rumoured to be looking to leave the Etihad after struggling for game time last season. Grealish's arrival has not convinced him he will be getting any more starts this season.

Kane has stated his desire to leave Tottenham in recent months, and caused a storm last week when he didn't appear at training for the club.

However, the 28-year-old later released a statement in which he categorically denied ever refusing to train for the club. 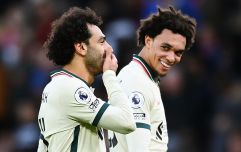 END_OF_DOCUMENT_TOKEN_TO_BE_REPLACED

Harry Kane rejoined his teammates for training on Saturday, five days after he was reportedly due to return to the club.

City have already bid £100m for Kane, but if there is any owner in the Premier League who will refuse to budge on their valuation of a player, it's Daniel Levy.

‘I did three grams of coke during a game’: Inside football’s problem with Class A drugs

Emotional moment footballer comes out to his teammates


popular
The FootballJOE Pub Quiz: Week 11
O'Hora and Keegan hammer into each other, both of them only revelling in it
Man United experiencing their Bishop Brennan getting kicked up the arse moment
McBrearty has dramatic equaliser ruled out as Naomh Conaill win Donegal grudge game
Man United's tactical issues summed up in six shocking screenshots
Jesse Lingard seeks to clear up what United fan shouted when he was warming up
Manchester United players 'lose faith' in Solskjaer after Liverpool pasting
You may also like
22 hours ago
Leeds fan has police called on him after celebrating goal against Wolves
1 day ago
Liverpool take an almighty dump on hopeless Man United
1 week ago
UFC star Paddy Pimblett "kicked out" for celebrating Liverpool goals in Watford end
1 week ago
Solskjaer gamble on Harry Maguire backfires in most horrendous way
1 week ago
Supercomputer makes shocking Premier League predictions
3 days ago
The story of Hugo Alvarado: From 10-year passion project to national team scout
Next Page