Some things are more important.

Making a Murderer might well have taken over Netflix and the head space of crime nerds - and, let's face it, anyone with a moral compass too - but it hasn't been ignored by the sporting world either.

On Thursday's GAA Hour show, the decision to allow Dublin to continue with two home games for the Super 8 series was compared to the developments presented in Making a Murderer about Steven Avery's case and the injustice of it all. Like the logic and the evidence is being ignored and an agenda pushed through.

After new evidence was pushed last night by Avery's attorney Kathleen Zellner to further suggest that the Wisconsin native has once again been wrongfully convicted, the case and the men behind bars were on minds all over the world.

Making a Murderer watchers, listen up. I'm going to walk you through what I've learned through my investigation that you didn't see in the show.

In conclusion, the killer is the person who had the access and opportunity to plant Steven Avery's fresh blood in Teresa Halbach's car. Use #AskZellner for questions

END_OF_DOCUMENT_TOKEN_TO_BE_REPLACED

In Dublin in fact, a FREE STEVEN AVERY banner was draping from the stands of the Aviva Stadium.

The Republic of Ireland v Northern Ireland clash wasn't always captivating the 30k-strong crowd and matters more pressing than the goalless friendly were being elevated to the forefront of the Lansdowne Road conscience.

Every June, a rally is held in Manitowoc County to protest what is described as wrongful imprisonment of Brendan Dassey and Steven Avery.

In the Irish capital, they had their own protest.

Whilst one Unionist advocate from the north mistook a Munster flag for a hate-fuelled balaclava (that actually happened), others were more concerned with matters across the pond. 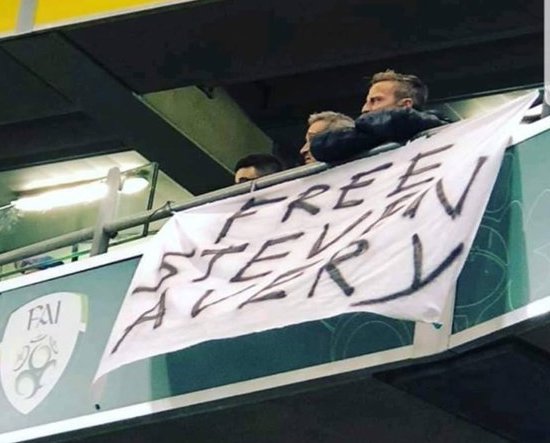 The game carried on as expected, no goals, no reason for optimism so why not use the 90 minutes spare time to do something worthwhile?


popular
Ballyhale's Colin Fennelly felt Ballygunner's victory speech was disrespectful
Eniola Aluko responds to criticism after on-air mistake on ITV
Brazil star responds after Roy Keane slates dancing celebrations
Roy Keane reacts to Brazil's jubilant celebrations in first half demolition job
Rory McIlroy explains 'falling out' with Shane Lowry that lasted a few years
Samuel Eto'o involved in an ugly confrontation with fan outside World Cup match
World Cup 2022 Day 16: All the major action and talking points
You may also like
4 weeks ago
"I race over to stop him from falling off his chair" - Delaney's shock when he heard O'Neill wanted Keane
4 weeks ago
"I was called ‘the Northerner'" - Martin O'Neill opens up on his time as Ireland manager
4 weeks ago
James McClean gets straight on to Graeme Souness after being told 'to get on with it'
1 month ago
Stephen Ireland explains why his Ireland career ended after only six caps
1 month ago
Stephen Kenny responds to Brian Kerr's criticism of his performance as Ireland manager
1 month ago
"Nobody could touch him that day" - When Roy Keane reigned in Spain
Next Page