Louis van Gaal has criticised Fifa for the decision to allow Qatar to host this year's World Cup, describing it as "ridiculous" and "bull****".

The Netherlands manager will be looking to win the World Cup for the first time in the country's history at this winter's tournament.

However, the former Manchester United boss has been keen to voice his opinion on the controversial decision to hold the tournament in the Middle East.

Given the country's well-documented human rights issues and widespread criticism of the working conditions for the migrant workers constructing its stadiums, Qatar have come under heavy scrutiny ever since they were named as hosts back in 2010.

While Fifa have previously discussed their intention to make the game more global, Van Gaal believes that the governing body are focused on the huge financial rewards for holding the tournament in Asia.

Louis van Gaal was never one for mincing his words 😶 pic.twitter.com/PdKRHabKVp

Speaking to reporters on Monday, the 70-year-old said: "I have already mentioned it in previous press conferences. I think it's ridiculous that the World Cup is there. 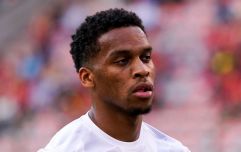 END_OF_DOCUMENT_TOKEN_TO_BE_REPLACED

"We are playing in a country that FIFA says they want to develop football there. That's bull****, but it doesn't matter. It's about money, about commercial interests. That matters in FIFA.

"Why do you think I'm not on any committee at FIFA or UEFA with my expertise? Because I have always opposed these kinds of organisations. I can say that in Qatar later, but that won't help the world get rid of this problem."

FIFA to meet Amnesty over Qatar.

According to reports, Fifa are set to hold talks with Amnesty International in Zurich on Monday, with the organisation critical of the decision to hold the World Cup in Qatar. The two parties will look to "discuss the situation of migrant workers in Qatar in connection with the World Cup Qatar 2022".

Van Gaal came out of retirement to take charge of the Netherlands national team for a third time last year, replacing Frank de Boer, who left the position in June following the team's underwhelming Euro 2020 campaign.