Argentina forward Lionel Messi has cited Copa America corruption after he was sent off during the third place play-off win over Chile.

Messi was dismissed for a clash with Medel just before half-time with Argentina already leading the game 2-0 at that point thanks to goals from Sergio Aguero and Paulo Dybala.

Messi was critical of the officiating in Argentina's semi-final loss to Brazil and refused to take part in the third place medal ceremony citing a lack of respect towards the Copa nations.

"Because we don't have to be part of this corruption, this lack of respect towards the whole Copa."

Messi added: "I always tell the truth. That leaves me calm. Then, if what I say has repercussions, it is not to do with me as I am always sincere." 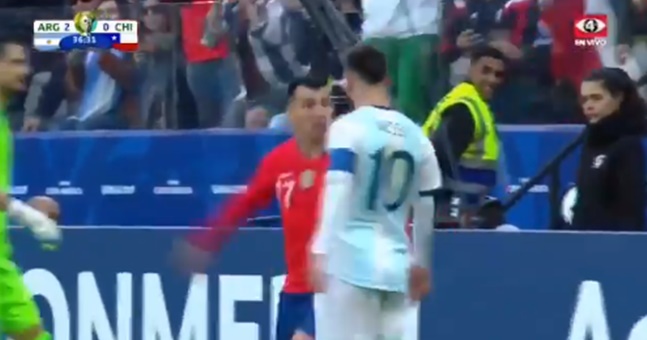 CONMEBOL fired back at the Barcelona star in a statement and said that the forward's accusations represent a lack of respect for the competition, all the football players involved and the hundreds of professionals of CONMEBOL

"In football sometimes you win and sometimes you lose and accepting the outcome of a match with loyalty and respect is a fundamental pillar of fair play. Same goes to the refereeing decisions, that are human and will never be perfect," the statement read .

"It's unacceptable that because of incidents proper to the competitions, where 12 nations competed in, all in equal condition, there have been unfounded accusations that misrepresent the truth and put to judgement the integrity of Copa America.

"Said accusations represent a lack of respect for the competition, all the football players involved and the hundreds of professionals of CONMEBOL, an institution that since 2016 has been tirelessly working to professionalise and develop South American football."


popular
Roy Keane cracked up Ian Wright and Gary Neville with England team spirit remark
Roy Keane shoots down ITV presenter's 'excuse' for England's draw with USA
'I was so stressed the week before the All-Ireland and I ended up having a panic-attack' - O'Shea and O'Sullivan open up
Wales supporter who travelled to World Cup with his son dies in Qatar
World Cup 2022 Day Seven: All the major action and talking points
The nine England World Cup footballers who could have played for Ireland
Amancio Ortega interested in buying Man United from Glazers
You may also like
4 days ago
World Cup 2022: All the major action and talking points from Day Three
1 month ago
The bridesmaids of the Ballon d'Or: Past winners if there was no Cristiano Ronaldo or Lionel Messi
4 months ago
Lionel Messi is no longer the highest-rated player in new FIFA leak claims
5 months ago
Lionel Messi equals Cristiano Ronaldo record with Finalissima triumph
6 months ago
Alejandro Garnacho: Excitement building at Man United youngster's progress
7 months ago
Steven Gerrard doubles down on Lionel Messi v Cristiano Ronaldo debate
Next Page