'This will not be to the liking of everybody, but it's also part of the game.'

Ralf Rangnick has defended his decision not to give Jesse Lingard an Old Trafford send-off before he leaves Manchester United as a free agent at the end of the season.

The Red Devils' interim boss opted to bring on Edinson Cavani instead of Lingard towards the end of United's final home game of the season against Brentford on Monday, having started the game with Juan Mata and Nemanja Matic.

Rangnick insists it is 'part of the game' 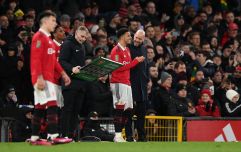 END_OF_DOCUMENT_TOKEN_TO_BE_REPLACED

All four players are expected to leave United in the summer, but Rangnick insisted that he has played Lingard more than Ole Gunnar Solskjaer and caretaker Michael Carrick did this season.

The German also noted that the 29-year-old missed the previous game against Chelsea and training due to personal reasons.

END_OF_DOCUMENT_TOKEN_TO_BE_REPLACED

"To start with, in the last couple of weeks under my tenure he has played far more games than he used to," said Rangnick.

"Number two, on game day against Chelsea, he asked me to release him from the game and training the following day for personal family reasons.

"This was the reason with only three substitutes I had to take a decision between Edinson Cavani and Jesse Lingard, or the young Alejandro Garnacho, who I would have loved to have brought on and given a chance to play.

"I took the decision to bring on Edinson. Had I not brought him on, someone might have asked if it's classless not to bring on Cavani or Garnacho. After two substitutes, you have to take a decision and this will not be to the liking of everybody. This is part of the game."

🗣 "This will not be to the liking of everybody, but it's also part of the game."

Ralf Rangnick responds to the comments made by Jesse Lingard's brother calling it "classless" not to give the player a proper farewell at Old Trafford pic.twitter.com/GDICSHFjqX

The attacking midfielder's brother, Louie Scott, criticised United for not letting Ligard end his 22-year association with the club by playing one last time at Old Trafford.

"Not even a farewell. No wonder it's Conference League next year.

"Attacking players for celebrations when the club's being sold to the Super League OK.

"Class of 92, Busby Babes - you're ran by people who don't even know the offside trap.

"Classless and the fans need to realise."

Speaking on Scott's post, Rangnick added: "To be honest, I'm not reading a lot. I've not had the time in the last six months to read. I'm not on Instagram, I'm not on Facebook, and I'm not engaged in those areas.

"My focus has been to develop the team. In these days with social media, there is always somebody posting something and it's important not to take too much notice of that."

The Red Devils travel to Brighton & Hove Albion on Saturday, hoping to close the gap on fifth-placed Tottenham Hotspur.