"I didn't quite get that one."

Liam Brady has questioned Stephen Kenny's decision to substitute Michael Obafemi during the Republic of Ireland's 2-1 loss to Scotland on Saturday night.

Ireland took the lead in the Uefa Nations League game. John Egan scored with a brilliant strike after 18 minutes and Kenny's team were excellent in the first half at Hampden Park.

Scotland, however, took control of the match after the break. Jack Hendry equalised before Ryan Christie scored a penalty to give the hosts all three points. 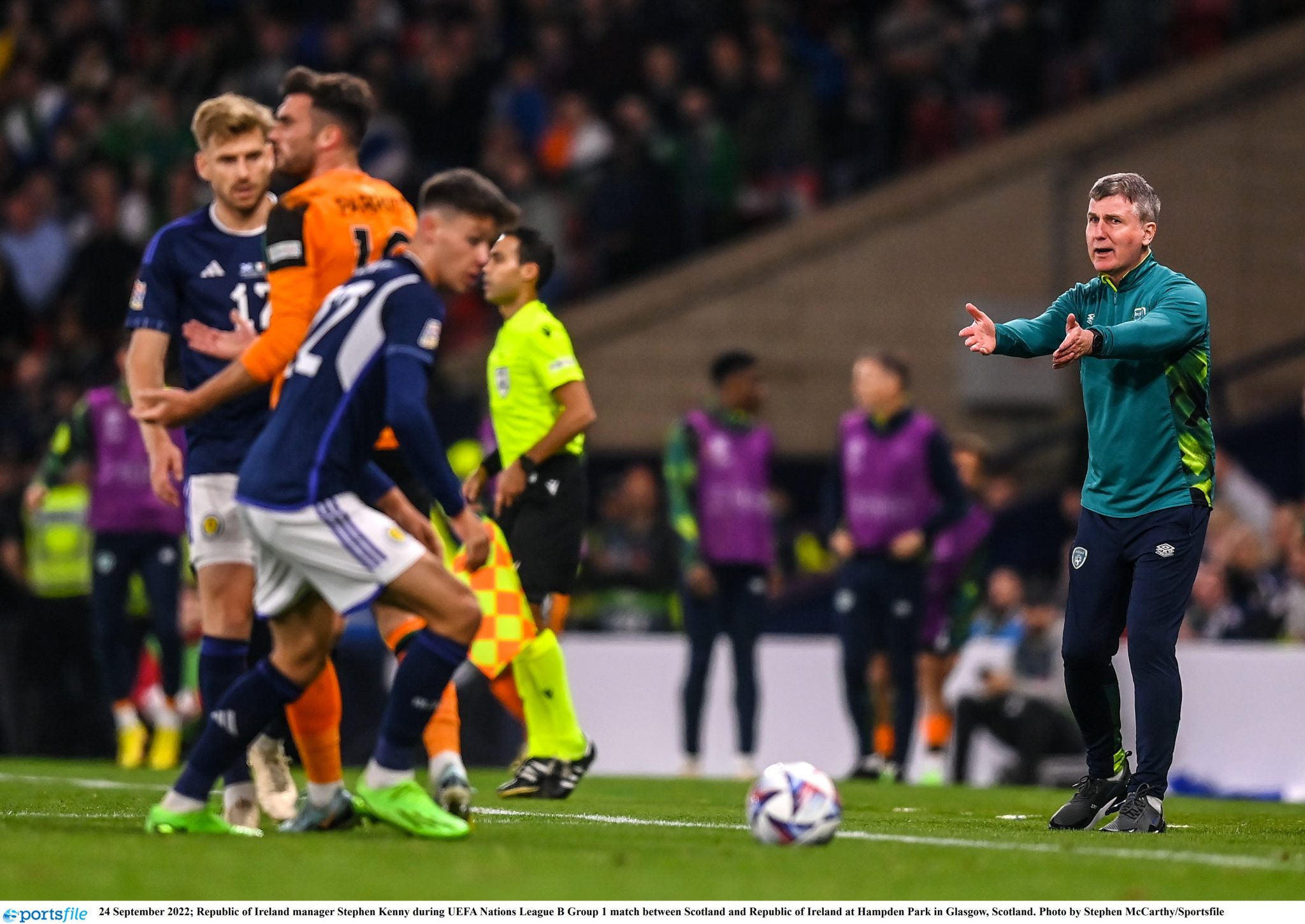 In a match decided by fine margins, Kenny's decision to take Obafemi off for Chiedozie Ogbene after 60 minutes was questionable.

END_OF_DOCUMENT_TOKEN_TO_BE_REPLACED

The Swansea City striker was Ireland's most dangerous player and the one reliving pressure on a team under pressure.

It is possible that Obafemi was tired, as he has not played a lot of first-team football this season. Yet, the decision appeared to hurt Ireland, as the team's threat on the break reduced following his withdrawal. 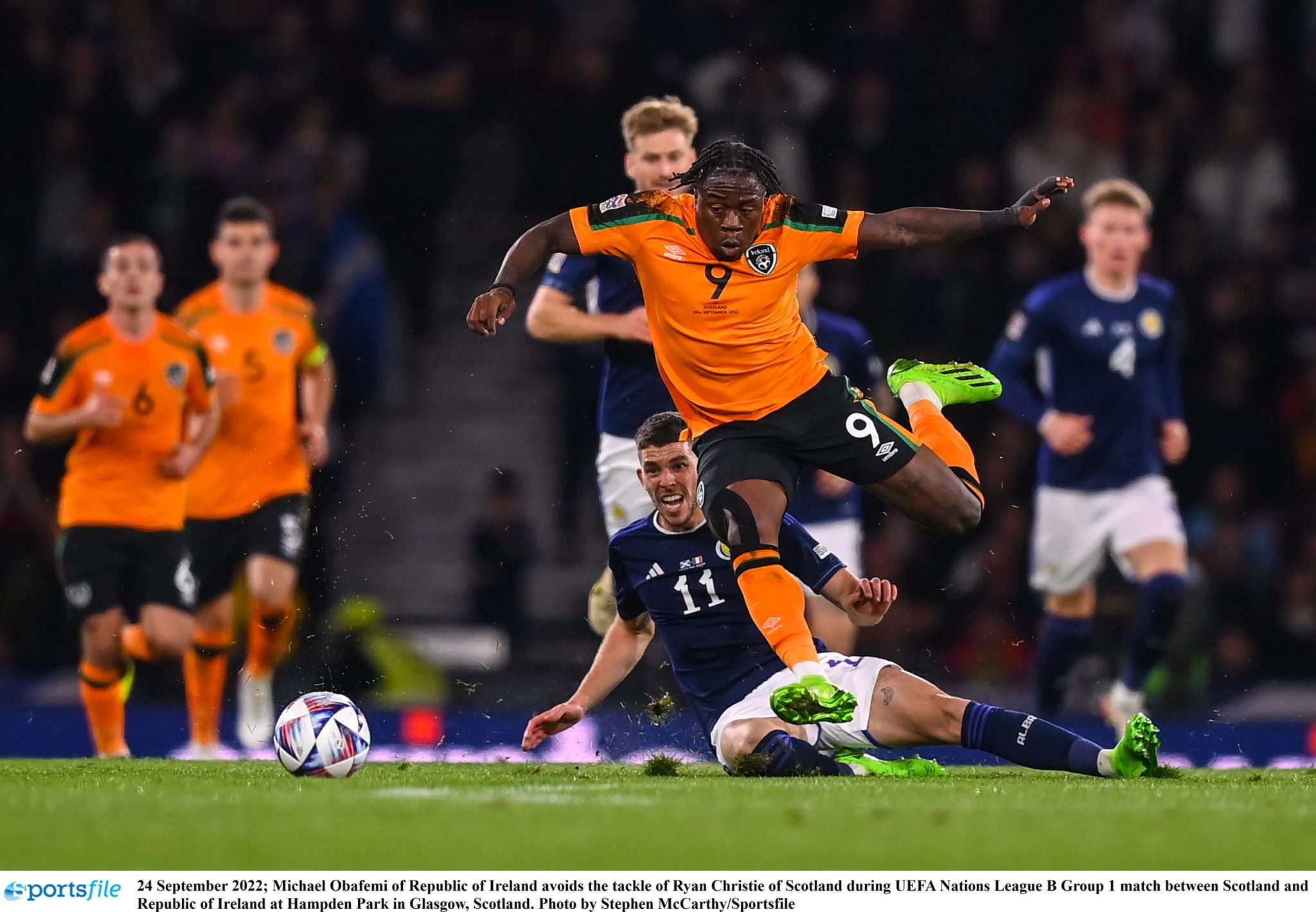 "I don't think it helped taking Obafemi off," Brady said on RTÉ following the match.

END_OF_DOCUMENT_TOKEN_TO_BE_REPLACED

"That was a strange call, for me, from Stephen Kenny. If I had one criticism of what went on tonight, it was him taking off Obafemi.

"He was causing Scotland all sorts of problems. It was him that showed tremendous pace to outstrip the Scottish defence when he laid the ball on for (Troy) Parrot.

"So, I didn't quite get that one. I know he hasn't been playing week-in-week-out...

"Unless it was a tiredness issue," host Peter Collins said. "Yeah, but he didn't look tired," Brady responded.

"He was flying. He was causing Scotland all sorts of problems. I didn't quite get that one. When he went off, it didn't help us."

⁮Liam Brady says Ireland have to stop shooting themselves in the foot but that Stephen Kenny "is getting there with this team"#SCOIRL #NationsLeague pic.twitter.com/1GmeiHNEiw

Ireland's next match is at home to Armenia on Tuesday. Kenny's team will be aiming to avoid relegation from their Nations League group.


popular
Talksport presenter puts Martin O'Neill to the pin of his collar over Declan Rice and Jack Grealish
Roy Keane scores winning goal past Micah Richards in ITV v BBC pundits match
World Cup Power Rankings: The top eight pundits of the tournament so far
World Cup Power Rankings: The top 10 players at the tournament ahead of the quarter-finals
Gary Neville sticks up for Ronaldo as contextless pictures and videos taken as gospel
"There's no soccer, hurling, or rugby" - Kilcoo's secret to success
Ballyhale's Colin Fennelly felt Ballygunner's victory speech was disrespectful
You may also like
6 days ago
Shay Given on how far Ireland could've gone at the 2002 World Cup with Roy Keane in the team
2 weeks ago
Full player ratings as Ireland lose 2-1 to Norway at the Aviva Stadium
1 month ago
"I race over to stop him from falling off his chair" - Delaney's shock when he heard O'Neill wanted Keane
1 month ago
"I was called ‘the Northerner'" - Martin O'Neill opens up on his time as Ireland manager
1 month ago
James McClean gets straight on to Graeme Souness after being told 'to get on with it'
1 month ago
Stephen Ireland explains why his Ireland career ended after only six caps
Next Page