The two lads were holding nothing back.

Hampden Park was hopping as Scotland hosted Ireland in a lively Nations League encounter that was made for James McClean and John McGinn.

The Scotland and Ireland midfielders were as pumped and poised for the game as supporters from both countries that crammed into the Glasgow stadium.

It was McGinn that made his presence felt first, as he clattered into McClean over on the sideline after he received a short pass from Dara O'Shea.

A free-kick was immediately whistled for as the Aston Villa star jogged away without arguing.

END_OF_DOCUMENT_TOKEN_TO_BE_REPLACED

James McClean lifted himself up with a gesture to the referee then smiled in McGinn's direction. Seasoned football fans sensed what was coming.

Rather than seek revenge by fouling McGinn, though, McClean instead just hounded him any time he got within 15 yards. On three separate occasions in the first half, McClean's pressure on the Scot forced possession to be squandered.

McClean had a role to play in the Ireland opener as he curled in a devilish corner that the Scotland defence could not fully clear. When Jayson Molumby nodded the ball back towards the six-yard box, it fell to John Egan and the captain delivered a fine finish.

END_OF_DOCUMENT_TOKEN_TO_BE_REPLACED

John McGinn was next to clash with Matt Doherty, as the pair jumped into a 50/50. James McClean, meanwhile, was having one of his more productive evening's for Ireland. He picked out Troy Parrott who, in turn, drew a fine save from Craig Gordon.

McClean was given a hot reception, throughout the warm-up and first half, by several Scotland supporters. He responded to some of the boos and catcalls by cupping his ears to the crowd after the Egan opener.

Josh Cullen and Jason Knight - for a foul on John McGinn - were both yellow-carded in the opening 45 minutes, with Kieran Tierney going off injured after a clash with Parrott. 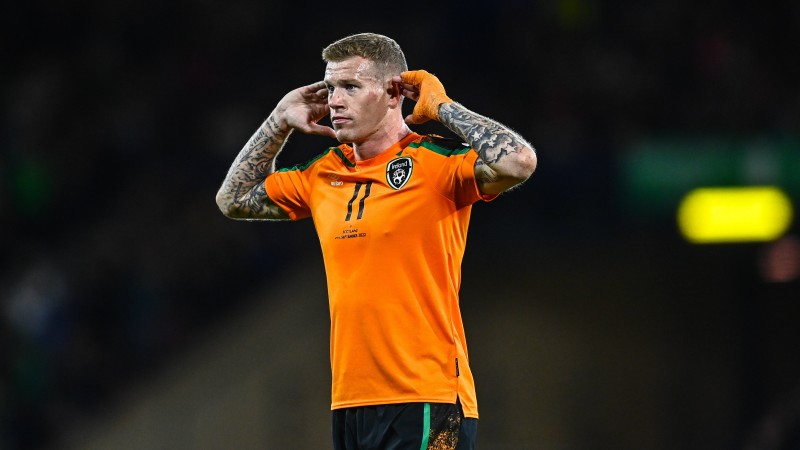 James McClean of Republic of Ireland reacts toward the Scotland supporters after his side's first goal, scored by John Egan, during UEFA Nations League match at Hampden Park in Glasgow. (Photo by Eóin Noonan/Sportsfile)

Ukraine thumped Armenia 5-0, earlier on Saturday, to ensure Ireland cannot top their group, even with another win over the Scots.