Tonight will be Jurgen Klopp's 400th game in charge.

Tonight Jurgen Klopp will manage Liverpool for the 400th time, after first taking the reins in November 2015, and enjoying unprecedented success with the club ever since.

Albeit they are going through a very rough patch at the moment, there's no doubt that Klopp will have plenty more good nights in charge of the Anfield faithful.

The German has guided his side through some incredibly dramatic games, but here SportsJOE have picked the top five of the Klopp era so far. 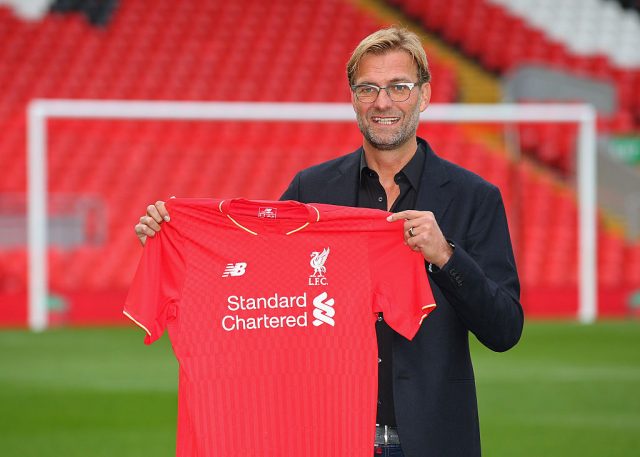 END_OF_DOCUMENT_TOKEN_TO_BE_REPLACED

This is when the DNA of Liverpool football started to evolve into Klopp's relentless, all-out attacking style, filled with intensity and risk.

Heavy metal football was officially born on this day in Anfield, and although he did not possess the same personnel and quality that he later would, his style of play meant that scoring goals was inevitable.

In fact, conceding at the consequence of scoring seemed to be the only problem they had; this was of course before the purchase of Virgil van Dijk and Alisson Becker. 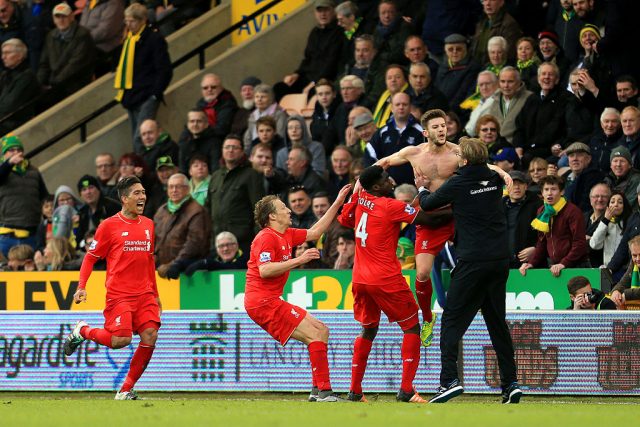 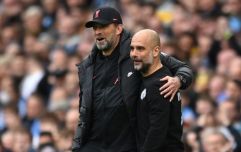 Gary Neville: "Jurgen Klopp is equal to or better than Pep Guardiola"

END_OF_DOCUMENT_TOKEN_TO_BE_REPLACED

On this day however, Liverpool went through every range of emotion, going 1-0 up, then 3-1 down, and with everything eventually all square at 4-4, it took a magical last gasp winner from Adam Lallana to secure victory for the Reds.

With the style of play now fully learnt, rehearsed and understood, this was the year Liverpool got the right people in to start perfecting it.

Sadio Mané, Mohammad Salah and Roberto Firmino were just beginning to cement themselves as the all-powerful front three that would come to be feared by defenders everywhere.

Andy Robertson had broken onto the team at left back, and suddenly they were full of dynamism and options going forward, and despite going down 1-0 to the eventual champions, they put their foot on the acceleration pedal and never let go. 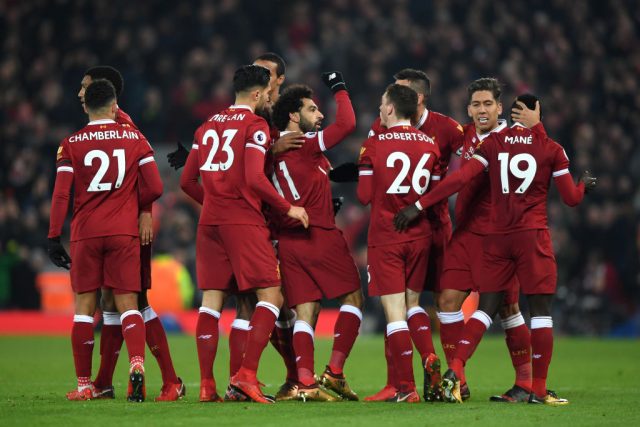 When all of the talk was about Pep Guardiola's side mimicking The Invincibles, those in the KOP side had other plans, as goals from Alex Oxlade-Chamberlain, Mané, Firmino and a delicious lob from Salah made sure Liverpool came out on top.

Even in the wildest dreams of Liverpool fans growing up watching United dominate the domestic scene year after year, did they ever think they would watch such a dismantling of their fierce rivals.

The fact that it was at Old Trafford, with the Salah hat trick, and the urge and desire to keep finding more goals even when the game was clearly won - it proved something to the fans that they only dared to dream of before - Liverpool were far better than United.

Even in past victories, it always felt like the Reds got away with one, and relief would be the overwhelming emotion more than anything, but on this day, Klopp highlighted that only were Liverpool better, but the gap was big. 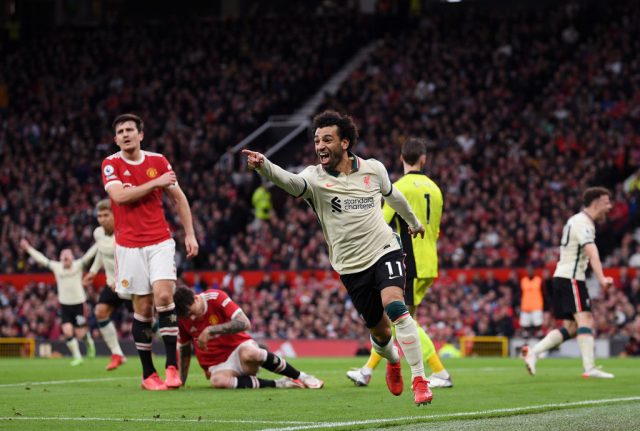 Only one year on from reaching their first European final since 2007 and losing out to Real Madrid, did Jurgen's men return to the grand stage, to right the wrongs of their past.

It wasn't an exciting game, but it ended with so many lingering and annoying questions that pestered Liverpool fans: Could Jordan Henderson lead the team like Steven Gerrard? Was Mo Salah a one-hit wonder? Could Klopp win finals? Were Liverpool merely a selling club?

With a little dance and trophy lift from their captain, Liverpool had once again won the greatest trophy in football, and not only that, but started a domino effect that would see them lift several more in quick succession. 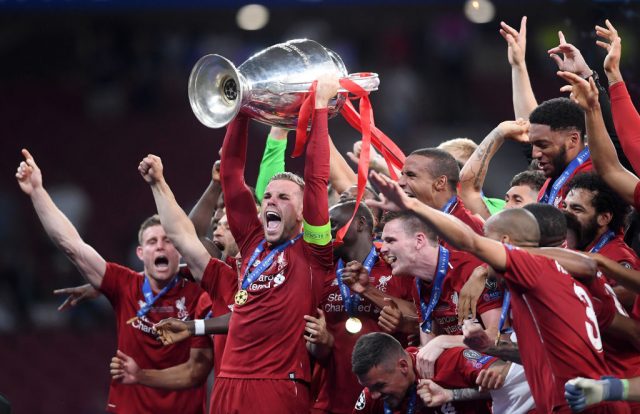 If you were to write this game down as a fictional story, publishers would bin it and claim that it wasn't realistic or believable enough for people to buy.

With 3-0 down on aggregate, and the threat that conceding a single goal to Barcelona would end their Champions League journey, against a team that had Philipe Coutinho, Luis Suarez and Lionel Messi - it was impossible. 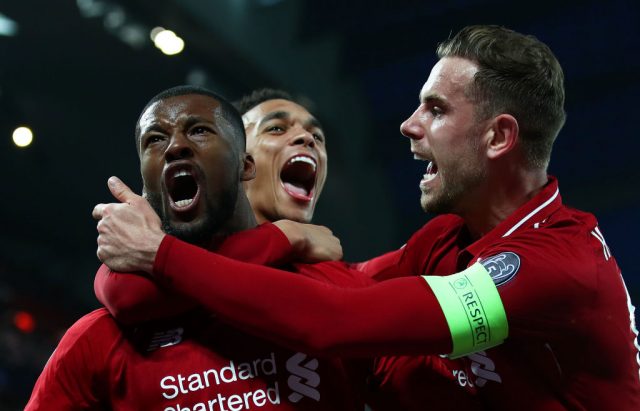 On top of all this, to even win the game, they had to score four unreplied goals - all without their star striker Mohammad Salah, who was out with injury.

It was ridiculous, magical, and incomprehensible, but it happened, and it will forever go down as the era-defining victory of the Jurgen Klopp reign.


popular
"He rode him like a machine rather than a racehorse" - Mullins doesn't spare Townend as second string come good
"Remember that name" - Sonny Bill Williams raves about Ireland U20 star after outrageous try assist
Matt Williams wants two changes and Peter O'Mahony benched for Ireland vs. France
Peter O'Mahony reaction to Liam Williams scuffle shows he may finally be mellowing
Ireland vs Wales: All the big talking points, moments and player ratings
Two changes as familiar faces return to our Ireland team to face France
"The truth is I've never actually worked a day in my life" - Russell bows out on his own terms
You may also like
3 weeks ago
Jurgen Klopp snaps at reporter for asking about Liverpool's transfers
3 weeks ago
Jurgen Klopp doesn't recognise former Man City defender in awkward interview
1 month ago
The five best bets for Aston Villa vs Liverpool on St Stephen's Day
3 months ago
Trent Alexander-Arnold makes great point to those who criticise his defending
3 months ago
Jurgen Klopp says players shouldn't be expected to protest at the World Cup
3 months ago
Damien Delaney questions Jurgen Klopp over Liverpool's injury list
Next Page