Not for the first time after a Liverpool match, this season, there was praise for Alisson Becker despite him conceding more than once. Jurgen Klopp cut a frustrated post-match figure as more points were dropped in the pursuit of Arsenal and Manchester City.

Brighton went 2-0 up after only 15 minutes, at Anfield, with Leandro Trossard taking advantage of a couple of defensive aberrations - Trent Alexander Arnold had a poor start - to fire past Alisson.

END_OF_DOCUMENT_TOKEN_TO_BE_REPLACED

A brace from Roberto Firmino and a Brighton own goal saw Liverpool take the lead with less than half an hour to go, but Brighton were not done. With new manager Roberto di Zebri urging them on from the sideline, the visitors pressed forward and Trossard scored his hat-trick after a Virgil van Dijk error.

Following the game, which leaves Liverpool in eighth place and 11 points off Arsenal, Klopp looked exasperated as he admitted his team conceding first to the opposition was a genuine concern. 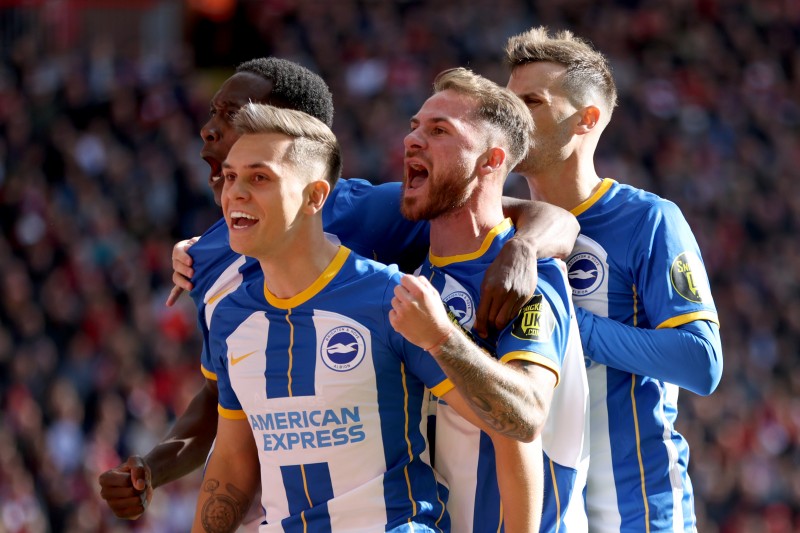 END_OF_DOCUMENT_TOKEN_TO_BE_REPLACED

At the tail-end of last season, Liverpool conceding the first goal in games saw them lose the Champions League final and drop two points in a home league draw with Spurs.

When Leandro Trossard rifled home the first goal for Brighton, it meant Liverpool had conceded first for the fifth time in seven Premier League games, this season.

"Brighton are a really good football team and a real team. It was a different formation, we were surprised a little bit? Yes a little. But we were already 2-0 down when we adapted from that. We scored our goals which were the counter-attacks. We could have won but would we have deserved to win? I'm actually not sure. Brighton deserved something.

"With all the good things we did during the week, the confidence is a little flower and when someone stamps on it, it is really difficult. We have to accept it. Of course it is not enough for us but it is what we got."

As Klopp continued, his admission about conceding first, and how his side is struggling to address the issue, was starling. He commented:

"I spoke to the boys in a similar way to how I speak to you. I don't know how many times I have to say we need a reaction. The first goal has an impact on both teams. They were flying and we were somewhere in between. They used that for the second goal.

"We could have defended much better. It's football and you have to accept it. On a day like this when it starts like this, it's important to fight your way through. It would be nice if you could win it. We always have problems against Brighton who are a very good football team but we have to do better.

"I know we have 10 points and that's the reality. I don't hide from that. We have to go together and build."

Up next for Liverpool is a Champions League clash with Rangers, who have lost their opening two fixtures of the group stages and will be desperate to get a result.


popular
Talksport presenter puts Martin O'Neill to the pin of his collar over Declan Rice and Jack Grealish
Rory McIlroy explains 'falling out' with Shane Lowry that lasted a few years
Roy Keane scores winning goal past Micah Richards in ITV v BBC pundits match
World Cup Power Rankings: The top 10 players at the tournament ahead of the quarter-finals
Gary Neville sticks up for Ronaldo as contextless pictures and videos taken as gospel
Cristiano Ronaldo's sister blasts Portugal boss' decision to start forward on the bench
Roy Keane reveals what he wrote about England during Senegal game
You may also like
1 month ago
Looking back at the best Tottenham vs Liverpool clashes of the past
1 month ago
Man City club doctor takes aim at Jurgen Klopp in deleted social media post
1 month ago
Player ratings as Man United beat West Ham thanks to Marcus Rashford goal
1 month ago
Liverpool Leeds player ratings: Crysencio Summerville stuns Reds at Anfield
1 month ago
Five talking points as Liverpool face Leeds at Anfield in a crucial Premier League game
1 month ago
Referee Bobby Madley to make Premier League return four years after being sacked
Next Page