"Without Bobby Firmino, we would not be in the Champions League even."

*Ron Manager voice*: It's a nice headache to have, isn't it?

From the second Diogo Jota bagged his first goal on Tuesday night, you just knew that, at some point before he left the stadium, Jurgen Klopp would have to bat away at least one question about having a 'selection headache'.

Having replaced Roberto Firmino, who only has a single goal to his name so far this season, Jota helped himself to a hat-trick in the 5-0 Champions League thumping of Atalanta, enough for many to suggest the former Wolves forward would be replacing the Brazilian on a more permanent basis.

"Good performances never give me a headache," he said.

"Tonight the decision was clear, it made sense first of all to use the good shape Diogo was in, and secondly because of the way Atalanta plays and defends, we should use the skillset of Diogo to help us.

"But the world is sometimes a bad place, that in the moment when somebody is shining we immediately speak about another player who played what feels like 500 games in a row. 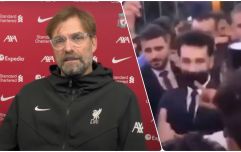 END_OF_DOCUMENT_TOKEN_TO_BE_REPLACED

"Without Bobby Firmino, we would not be in the Champions League even.

"He will be in the team, and for a lot of people in the world if you ask them ‘what makes Liverpool special?’ they would say ‘the way Bobby Firmino is playing’.

"For us it is important that we have more than 11. Tonight, Diogo played a super, super game but that says nothing about Bobby, and has nothing to do with me causing headaches.

"I am more than happy that the boys played like they played tonight."

Klopp will now decide whether to stick with Jota or restore Firmino to his lineup for this  weekend's Premier League clash with Manchester City.