A meeting of heads at Ipswich Town has transformed into what the tabloids would dub a war of words.

Jon Walters has been telling some amazing stories about his eventful football career on JOE's Liquid Football and, naturally, a lot of the madder ones revolve around a certain Cork man.

When Walters first appeared on Sky Sports a few months before his retirement, it was clear he was going to quickly grow into one of the most essential football pundits with his experience, his straight-talking and his wit but it hasn't gone down well with everyone.

Here is Jon Walters on Roy Keane on our @FootballJOE show Liquid Football, just a few weeks ago 👀pic.twitter.com/iPycB6GNE7

Roy Keane doesn't like what he's been hearing from Walters and, on the Off The Ball road show on Wednesday night, he hit back at Walters' decision to tell the stories he's been telling.

From Walters' comments on JOE's Liquid Football, to Keane's most recent reaction, here's a tale of the two's relationship - post Ireland.

Walters: "We were turning down four or five million moves to go to the Premier League. I was 27 or 28 at the time and I was thinking 'I'm not going to get the chance to play again'. Other clubs were still coming in for me and I was getting a little bit older. We weren't doing too well in the league and to go play Premier League football after being at Ipswich for four or five years and then to move closer to home, you might not get that chance again."

Keane: "Imagine if Jon won a trophy. He talks a good game. He goes on the TV, on about how he was harshly treated by me. Not kicking a ball for Burnley for two or three years. On TV, crying about his family situation. You know, how about lying low for a while, taking it easy. Have a look at his medals? Wouldn’t take long." 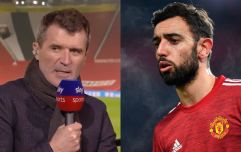 END_OF_DOCUMENT_TOKEN_TO_BE_REPLACED

Walters: "I had a knock on the door and asked can I have a word. I said 'look I know clubs are coming in for me' and he said 'how do you know?' I know that clubs are coming in, you're not meant to know, but you do know and they said if it was the right offer they'd let me go but only if they match our evaluation so that was going on for about two or three weeks. You're not meant to know what's going on but agents speak to agents and everyone knows. I knock on the door a second time and it was like 'I've told you once that you're not going unless they meet our evaluation and they haven't met our evaluation so you're not going'."

Keane: "I’ll give you an example. Jon Walters the last two or three years... Jon does a lot of talking, it’s amazing. Harry Arter, he went to Cardiff on loan, got relegated. [Stephen] Wardy can’t get in the Stoke team, at the moment, bottom of the league. We got beaten by Wales. Jon played. Jon didn't have a good game. Wardy played, he didn't have a good game. They need to go back and see how bad they were."

Walters: "I was like 'ohh piss off or this is a fucking joke this' and he said 'who do you think you're talking to?' Then it switched back to me and I said 'I'm talking to you'. Then for the next 15 or 20 minutes he took his watch off and his jumper off and we went head-to-head in his office. Like kids. This went on for about 10 or 15 minutes then I went to go out again, said something else, came back in and went back head to head, made all sorts of threats."

Keane: "Ironically two or three years ago when his career was coming to the end, he went on loan, he went to Ipswich on loan. I was laughing my head off. How many years ago is that [big moments for Ireland]? How long is he going to live off that? A certain player scored against Holland [McAteer] and he still is."

Walters: "For me he was a good player and a good tackler and all that but for me he's not someone to be scared of, for me anyway. All that was said in the conversation we had and all the lads could hear what was going on and they said 'I can't believe you did that'.

popular
Roy Keane's first impression of Cristiano Ronaldo proved to be very accurate
The SportsJOE 12 o'clock quiz | Day 290
The 14 Irish players Down Under as TG4 come up with the goods once again
Joe Rogan reveals he could be parting ways with the UFC
The controversial reason Conor McGregor's win over Nate Diaz was not unanimous
Michael Bisping tears into Dillon Danis for 'trying to be Conor McGregor so hard'
Joe Rogan heard Dillon Danis insulting Khabib and here's what he said before the fight
You may also like
1 month ago
Roy Keane's pre-match prediction for Man United vs Leeds proved 100% correct
1 month ago
Roy Keane expertly cuts down Gary Neville with hilarious squad rotation dig
1 month ago
Chris Kamara meets Roy Keane in a lift
1 month ago
Roy Keane: Arsenal will have enough to stay in the Premier League
1 month ago
Roy Keane shares heartwarming anecdote about watching Diego Maradona train
2 months ago
Richard Keys brands Roy Keane a 'disgrace' for Kyle Walker 'idiot' comment
Next Page