A disastrous finish for United and Jesse Lingard will be kicking himself.

Manchester United looked to have seen out a storm brought on by Aaron Wan-Bissaka, but Lingard's late decision to play a weak back-pass cost the three-time champions dearly.

END_OF_DOCUMENT_TOKEN_TO_BE_REPLACED

United led through Cristiano Ronaldo before falling back and trying to see out the game from 1-0 after that Wan-Bissaka red card. Moumi Ngamaleu grabbed a well-deserved equaliser and it was left to Theoson Siebatcheu to slot home the winner after that Lingard brain-fade.

'It's a social media thing'

END_OF_DOCUMENT_TOKEN_TO_BE_REPLACED

Ole Gunnar Solskjaer had a point, but there is surely a way to celebrate sublime passes like the one that Bruno Fernandes unfurled against Young Boys. If any assist could be worth double...

Ahead of United's Champions League opener against the Swiss side, Solskjaer was asked about Paul Pogba's excellent start to the season, which has included seven assists in the Premier League. Not designed as a sleight on his midfielder, the Norwegian gave his take on what really counts.

"What does an assist consist of?" Solskjaer mused. "A square pass and Bruno hits the top corner or when Paul plays a great pass through and Mason runs through?

"Paul has always been a great passer, one of the best in European football, and he’s not got assists from his best passes this season. I don’t pay attention to assists, it’s a social media thing.

"I would give Anthony Martial an assist for Jesse Lingard‘s goal, when he leaves the ball, like Yorke and Cole."

END_OF_DOCUMENT_TOKEN_TO_BE_REPLACED

Midway through the first half of United's clash with Young Boys at the Wankdorf Stadium, Fernandes stepped up with a capital letters ASSIST.

Taking possession over near the left wing, Fernandes spotted Ronaldo drifting in at the back post and, with the outside of his boot, curled in a cross that put it on a plate for his compatriot. 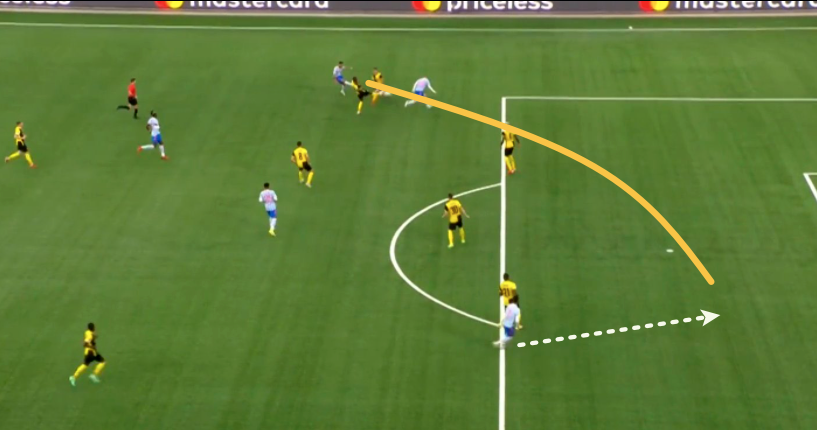 All that was left was the finish. Ronaldo applied that to perfection with his second nutmeg finish in four days.

He slotted the ball through the legs of David von Ballmoos and, 12 years on, he was back netting for United in Europe.

That pass from Fernandes, though... 😍 pic.twitter.com/fBY1zxZi5j

That was as good as it got for United, though.

Aaron Wan-Bissaka picked up a straight red card after 38 minutes for a rash challenge, and it forced a major rejig. Jadon Sancho was replaced by Diogo Dalot and, at half-time, Raphael Varane replaced Donny van de Beek.

That saw United switch to a 3-5-1 formation, with Dalot and Luke Shaw as wing-backs. It meant the United midfield was narrow enough, and it was surprising that both Bruno Fernandes and Ronaldo stayed on.

Young Boys put huge pressure on United but had no clear second half sighters until they broke up the right wing and a cross that went through Shaw's legs eluded Harry Maguire too. Moumi Ngamaleu got to the ball ahead of Varane and scored past David De Gea.

That forced Solskjaer to finally take off Fernandes and Ronaldo and replace them with Nemanja Matic and Jesse Lingard. Late on, Solskjaer brought on Anthony Martial for Fred, who had run himself into the ground.

De Gea made a couple of smart stops, including one finger-tip save, and Varane needed to make a last-gasp clearance from a corner as United were set to share the spoils.

Then Jesse Lingard stepped up and he will rue that poor back-pass for a while to come.