This is a very Jermaine Jenas take.

If you've been paying even the slightest bit of attention to the Champions League this season you'll know that, in the form of Matthijs De Ligt, Ajax have an absolute colossus of a centre-back.

Only 19 years of age, he is already captain of the historic club, who were cruelly knocked out in the semi-finals of the competition after Lucas Moura scored in the 95th minute to send Spurs through to the final against Liverpool.

His performances this season have caught the attention of some of Europe's biggest clubs but according to Jermaine Jenas, if he was in charge of Manchester City (for example), he would go after Slabhead himself - Harry Maguire - instead of the Dutch wonderkid.

"He is a top player. He is clearly a player with a bright future ahead of him and is only nineteen years old. But I think Harry Maguire is a better player right now.

"If I were in charge of Manchester City, I would take Maguire over De Ligt. I don't see De Ligt doing anything Maguire can't do. The only difference is the age. "

Which, surely, is why you would opt for the younger player (by seven years) who has the potential to vastly outgrow Harry Maguire's current ability?

Nope. Not if you're Jermaine Jenas. 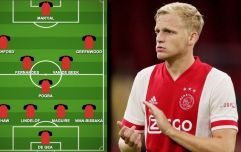 END_OF_DOCUMENT_TOKEN_TO_BE_REPLACED

Still, the worst De Ligt opinion belongs to none over than the scouting staff at Manchester United, who decided to pass up on the chance to sign the defender after they found out his father was overweight and feared that young Matthijs would be prone to piling on the pounds as he got older.

You couldn't make it up. Except given the current state of affairs behind the scenes at Old Trafford, including letting Ander Herrera leave the club on a free, you probably, definitely could.

"If I was Man City, I would go for Harry Maguire over De Ligt"

popular
"The guy's a genius. He is one of the greatest players of all time" - Roy Keane
When Roy Keane calls a tackle "an assault", you know it must be bad
Ronaldo removes Coke, shows off the drink of champions in pre-match conference
Cristiano Ronaldo snub wipes billions off Coca-Cola’s market value
Premier League's 2021/22 fixtures released as Man United get handy start
Can't imagine Rangers fans were happy about what Ronnie Whelan called Scotland
Damien Duff bides his time before roasting the FAI with 'motivational video' comment