He was exactly as shocked as you'd expect him to be...

Eamon Dunphy's punditry style was unique, to say the least.

Whether or not you were a fan, you can't deny that he always spoke his mind, even when he probably shouldn't have. 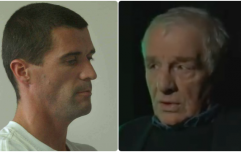 "At the very last minute, Keane said he would stay in Saipan"

END_OF_DOCUMENT_TOKEN_TO_BE_REPLACED

And although it brought him a lot of controversy over the years, it did make for some extremely entertaining television.

We showed some of his best moments to former Newcastle midfielder Jermaine Jenas, to see how he thought Dunphy compared to the British pundits he is used to working with.

His reaction was exactly what you'd expect...

We showed @JJenas8 some of Eamon Dunphy's most infamous moments. It was... a shock 🤷‍♂️

Coca-Cola ambassador Jermaine Jenas was in Dublin speaking about Coca-Cola’s sponsorship of the Premier League and its ‘Where Everyone Plays’ campaign.


popular
"I trained with a guy that was born in 2004 the other day. We reckoned Earlsie could be his father!" - Peter O'Mahony
Nigel Owens on most annoying players to referee (three of them are Irish)
Six All Blacks but no Ireland players in world's top 20 list headed by Antoine Dupont
Longford GAA movie explores the tale so many young footballers can relate to
What is the story with Tyrone clubs' woeful record in the Ulster championship?
"I asked one question and lads slagged the arse off me!" - Johnny Sexton on Roy Keane chat
"I remember someone saying, 'This guy's the best of the lot of them. Just wait for him'" - Brian O'Driscoll
You may also like
3 years ago
"Embarrassing nonsense" - Eamon Dunphy takes aim at O'Neill after Denmark draw
3 years ago
Eamon Dunphy explains exactly why he fell out with Roy Keane
3 years ago
Eamon Dunphy on Roy Keane: I think Saipan changed him
3 years ago
"Keane is finished" - Eamon Dunphy claims Roy Keane will never get another job in football
3 years ago
Dunphy claims ambush by RTÉ panellists led to him getting a warning
3 years ago
Eamon Dunphy claims Bill O'Herlihy was forced out by RTÉ
Next Page