Former Manchester United striker Javier Hernandez has claimed that he would play for free if he ever returned to Old Trafford.

The 34-year-old, who won two Premier League titles during a five-year spell with the Reds Devils, insists that the Premier League club remain close to his heart.

However, he also admitted that he has not been surprised by the club's recent fortunes since the departure of Sir Alex Ferguson in 2013. 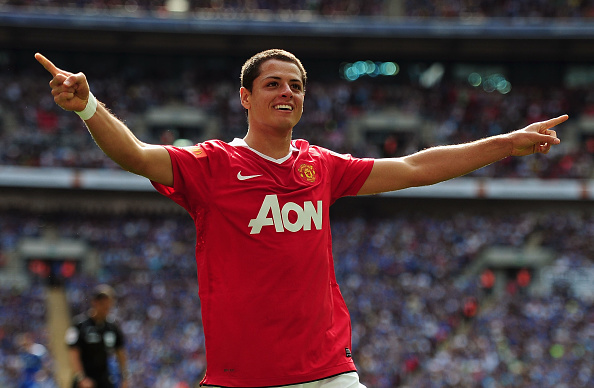 Javier Hernandez offers to play for Manchester United for free.

While the man nicknamed 'Chicharito' is currently eying another championship medal with MLS outfit LA Galaxy, he also revealed that he would 'play for free' if United came calling.

END_OF_DOCUMENT_TOKEN_TO_BE_REPLACED

Hernandez said: "If United came for me then I’d say 'yes, I’ll play for free.' Of course, you know, I’d do that.

"But I also want to be very respectful to my club. I am playing very consistently and in my mind my conviction is all about winning a championship with LA Galaxy.

"In the future, if things happen then they happen - but in my mind I am 100 per cent with LA."

END_OF_DOCUMENT_TOKEN_TO_BE_REPLACED

Hernandez - who was loaned out to Real Madrid a year later after David Moyes was replaced as manager by Louis van Gaal - believes that the Red Devils were always going to suffer a decline once Ferguson left Old Trafford.

"United need to get over the fact that Sir Alex Ferguson has gone," he added.

"Would we like to have someone similar? Yes, yes, yes. But Sir Alex has gone and it is never going to be the same.

"It doesn't surprise me what has happened at United because in life it’s not easy having a manager for 26 years in the way that Sir Alex did it.

"Sir Alex Ferguson is gone, we would love to have someone similar" 🗣

"One of his greatest aptitudes, in my humble opinion, was that probably seven out of 10 players who signed for United worked out.

"That’s not easy, man - not for Real Madrid or Barcelona or even for Chelsea, (Manchester) City, Liverpool or Bayern Munich.

"It is like winning the lottery. Do you think anyone you hire afterwards is going to be able to do even 80 percent of what Ferguson did?"

Hernandez backs Ronaldo to succeed if he stays at Old Trafford

Chicharito suggested that United not currently competing in the Champions League means that certain transfer targets will not make the move to Old Trafford.

However, he does believe that wantaway striker Cristiano Ronaldo could have a positive impact on the team this season, despite the Portuguese international wanting to leave the club.

Hernandez said: "The problem is that the other difficulty is that United are not in the Champions League, so some players aren’t going to come.

"Of course, some players will always want to come to Manchester United. If another club can offer Champions League then who do you choose? You choose the best club for your career.

"United are now in the same process that Liverpool was in when I was in England. So I understand what is happening with Ronaldo.

"Time will tell what is going to happen with him - but what if Ronaldo stays and scores 40 goals? That could happen."

Hernandez made 157 appearances for the Red Devils, registering 59 goals and 20 assists during his time at Old Trafford.