He has had enough.

James McClean has tweeted a message to the English Football Association after he was abused by Queens Park Rangers' supporters on Saturday.

A video emerged on social media of the Stoke City winger getting abused during the Championship game at Loftus Road.

McClean stood at the side of the pitch looking perplexed as some supporters screamed and cursed at him.

James McClean being abused by QPR fans today. 'They have nothing in their whole imperial arsenal that can break the spirit of one Irishman who doesn't want to be broken.' @JamesMcC_14 #coybig 👊🏽🇮🇪🇮🇪🇮🇪 pic.twitter.com/4nkpkWKeZX

QPR condemned the fans who abused the Republic of Ireland international on Saturday and said they are seeking to identify those involved.

McClean has since responded to the video on Twitter and sent a message to the FA.

"I am going to just start giving abusing back in whatever form I like and you’ll do nothing, just like you’s are doing everytime this occurs, otherwise that 'for all' on your logo would look very hypocritical and stupid, thanks hi." 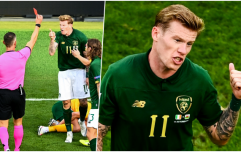 END_OF_DOCUMENT_TOKEN_TO_BE_REPLACED

McClean has been targeted throughout his time in English football due to his decision to not wear the Remembrance Day poppy.

Last November, he hit out that "uneducated cavemen" who abused him during a game with Middlesbrough and thanked those who supported his stance.

popular
"I did for one second think of flinging the boot at him" - Maher's journey an inspirational thing
The SportsJOE 12 o'clock quiz | Day 288
QUIZ: You'll need to be a massive Ireland fan to get all these one-cap wonders
QUIZ: You have 30 seconds to answer this one tricky football question
You'll have to be a diehard fan to get 20/20 in this Liverpool players of the 90s quiz
In defeat, Jerry Kelly dies with his boots on in coming of age final display
The SportsJOE 12 o'clock quiz | Day 286
You may also like
6 months ago
James McClean opens up on sickening, Covid-related hate mail
9 months ago
James McClean fined by Stoke for balaclava Instagram post
10 months ago
QUIZ: You have 90 seconds to name every team James McClean has played for
1 year ago
James McClean knew exactly what he wanted to say to the Danes
1 year ago
'I'm a white Irishman... That's not high on the agenda in England'
1 year ago
Jonathan Walters calls for better support for James McClean
Next Page