Grealish left the Brazilian midfielder red-faced at the Etihad.

Grealish put in one of his best performances for City, as the reigning Premier League champions thrashed their Manchester rivals 6-3 on Sunday afternoon. 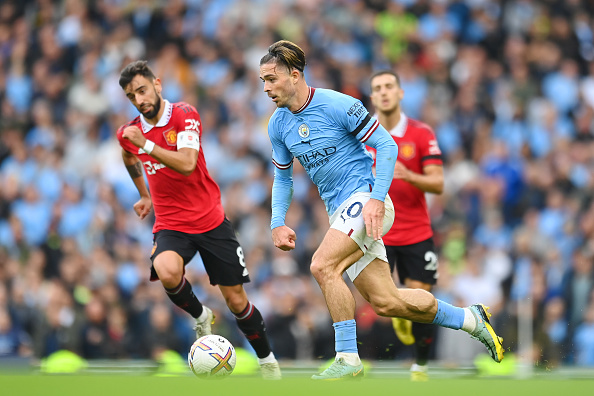 END_OF_DOCUMENT_TOKEN_TO_BE_REPLACED

Although the likes of Erling Haaland and Phil Foden grabbed the headlines, Grealish put in one of his best performances in a City shirt since his £100m move from Villa last year. It included one particular moment involving Brazilian Champions League winner Casemiro.

With the win already in the bag by the time the second half was underway, Grealish and his teammates continued to run the United players ragged.

United had brought on a number of substitutions, including £60m signing Casemiro.

But he was quickly left red-faced by Grealish who surged into the United box and took on the Brazilian, and made the former Real Madrid man look rather silly as he quite literally sat him down.

You can watch the clip on Twitter by clicking here.

Grealish clearly enjoyed it too and included a photo of the moment in his celebratory social media post.

He captioned it: "Offfttt… What a day at the Etihad!! Manchester is BLUE."

Boss Pep Guardiola was also keen to highlight the winger's display. When asked about Haaland's barely-believable performance, the Man City manager said: "Not just him [Haaland]. Look at Jack Grealish today, how good he played.

"Kevin [de Bruyne], and Gundogan - come back in his position as holding midfielder that he started years ago. They're humble and they follow us.

"I'm very pleased. It's not about winning or losing, of course we want to win all the time. The way in the two or three days how they train, how they focus. It's good. It is a team sport. I understand the highlights for Erling. It's normal, perfect. 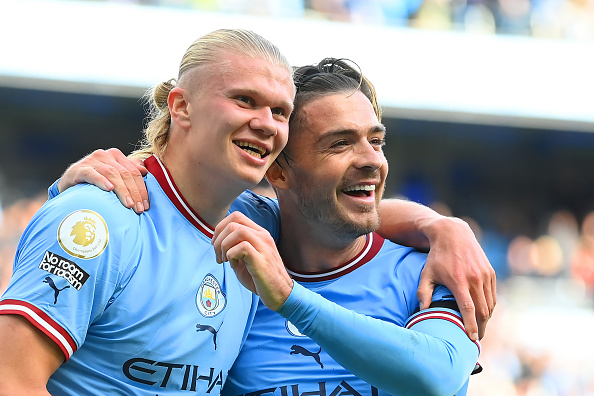 "One of the most incredible things is Erling comes here, he has the highlights, and Kevin is our best, most important player, and he accepts it. The ego they leave at the side and help each other. A team sport is like that.

"They want to be better when it happens. Erling says he adapts quickly and jokes a lot. That's good enough. After, try to do your best. Be who you are. The rest, sometimes win, sometimes lose. When you finish the game, try to finish the game and go to the locker room and say I did everything. I tried my best. With that, it's enough. No more than that."

City are next in action on Wednesday when they face FC Copenhagen in the Champions League, while United take on Cypriot side Omonia in the Europa League on Thursday.