Jack Grealish is going nowhere. According to Sky Sports, anyway.

The Aston Villa midfielder's future has been the subject of plenty of speculation this summer, with Tottenham believed to be one of several teams trying to sign him from his boyhood club. After Spurs finally decided to make an opening offer for Grealish on Tuesday, it now seems the 22-year-old will be staying put at Villa Park for the foreseeable future.

According to Sky Sports' sources, Grealish has been told by the club's new billionaire owners that he will not be leaving the club before the close of the transfer window on Thursday afternoon.

The bid from Spurs has been rejected, and Villa any further bid - be it from the North London club or any other team - will also be rebuffed.

WATCH: Jack Grealish has been told he WILL NOT be sold this summer, according to Sky Sources. pic.twitter.com/Avg6DiOBlp 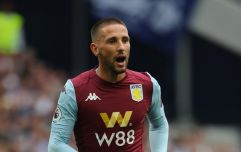 END_OF_DOCUMENT_TOKEN_TO_BE_REPLACED

It was assumed that Grealish would leave Villa this summer after the club lost their Championship Play-off final to Fulham at the end of the season. Spurs are thought to have bid £25m for him, a fee many seem to think was substantially below his true value.

The player was reportedly interested in the move as he wants to play Champions League football this season but will now turn his attention back to helping his current employers back to the top flight of English football.


popular
The SportsJOE 12 o'clock quiz | Day 189
QUIZ: Guess the footballer from their Wikipedia page #11
Conor McGregor shares DMs from Dana White to justify boxing comeback
"My job at Sky is not to be a cheerleader for Rory McIlroy" - Paul McGinley
QUIZ: Can you guess the football shirt sponsors of these classic 90s kits?
The SportsJOE 12 o'clock quiz | Day 188
QUIZ: Can you name every top European football club that begins with 'L'?
You may also like
1 year ago
47-word release ends Glenn Whelan's Aston Villa career
1 year ago
Jack Grealish cut his head open during trophy lift
1 year ago
Why Jack Grealish's decided to play in pair a of worn out boots
1 year ago
Dean Smith opens up on his father's illness in post-match interview
1 year ago
Derby goalkeeper's howler helps send Villa back to the Premier League
1 year ago
Aston Villa score two in two minutes as West Brom capitulate at Villa Park
Next Page