Many were expecting a cagey World Cup final but, after half an hour, both France and Croatia had found the net and there was plenty of energy on display.

France took the lead after Mario Mandzukic got a hair to an Antoine Griezmann free-kick, which redirected the ball into the back of the Croatian net.

The goal was against the run of play and Croatia quickly busied themselves in pursuit of an equaliser. It wouldn't be enough in the end as the French tagged on three more goals and won 4-2 and that was all she wrote - no more World Cup until 2022.

4 and a half more years to wait#WorldCup

But Perisic struck an absolute bullet.

Shortly before the 30-minute mark, the ball broke to Ivan Perisic on the edge of the French area and, with impressive composure, he dragged the ball on to his left foot and let fly.

Hugo Lloris could only watch the ball sail past him as the Croatian winger sprinted to the corner flag to celebrate.

28mins: Ivan Perisic slams the ball home to equalise. Watch out for the run of Sime Vrsaljko before the free was taken.#RTEsoccer

END_OF_DOCUMENT_TOKEN_TO_BE_REPLACED

After being mobbed by his teammates, Perisic then pulled up one leg of his shorts and flexed his left quadriceps muscle as if to hammer home the point that he's got plenty of power in his left leg.

It reminded plenty of viewers of Cristiano Ronaldo's famous celebration when he found the net against Osasuna in the 2011/12 season with a driving effort from distance. 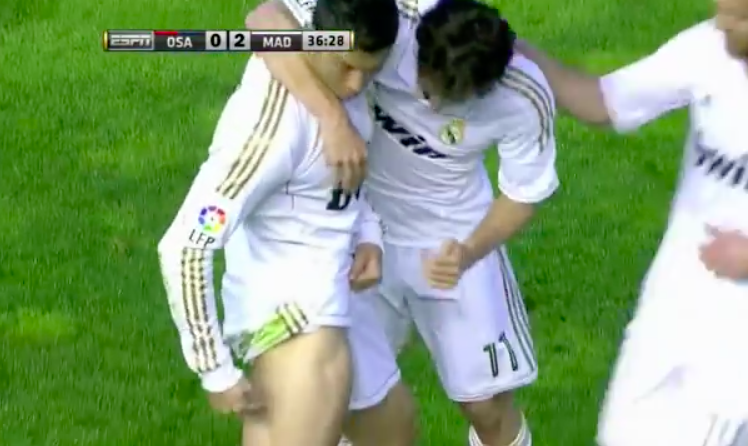 Was it a message from the Inter Milan star to the Juventus-bound Ronaldo? Or was it just a reminder of the traction engine of a left peg that Perisic has?

Either way, supporters adored it.

Oh my god Perisic showing off his thigh muscle as a celebration. If he was doing that to take the piss out of Ronaldo I have so much love for him.

Perisic flashing his thigh and pointing to it after scoring was Ronaldo-esque. #CRO

Perisic showing Ronaldo that he's not the only one with thighs! #WorldCup #Cro

popular
Only old-school fans will get 20/20 in this 1990s footballers quiz | Part 2
Tottenham open talks for Inter's Milan Skriniar
QUIZ: Identify the football club from these 12 crests
The SportsJOE 12 o'clock quiz | Day 185
Rio Ferdinand story about Dwight Yorke conversation shows Alex Ferguson's ruthless streak
How The Mountain lost 36kg ahead of boxing fight with The Beast
Sam Bennett's green jersey masterclass got Lance Armstrong talking
You may also like
2 years ago
Gareth Southgate offers classy response when asked about Declan Rice
2 years ago
Toni Kroos responds strongly to Mesut Ozil claims of racism in German camp
2 years ago
Benjamin Mendy responds to Pep Guardiola's comments on his social media use
2 years ago
Everton on brink of signing Yerry Mina from Barcelona
2 years ago
Jose Mourinho explains why Paul Pogba plays better for France than he does for Man United
2 years ago
Thierry Henry 'verbally agrees' to become new Aston Villa manager
Next Page