Is Glenn Whelan the most misunderstood player in Irish football?

It's enough to send chills up the spine of some Irish men and women.

It's a consistent source of frustration for Republic fanatics. It's one of the country's great mysteries. And it's seemingly what separates football managers from the average supporter.

END_OF_DOCUMENT_TOKEN_TO_BE_REPLACED

Glenn Whelan gets too much stick. He must do. He must.

What are Premier League managers - what are midfield gurus like Martin O'Neill and Roy Keane - seeing that seemingly an entire island is missing?

Whelan isn't appreciated in Ireland like he is in Stoke. That's easy for anyone to see.

But, whilst the Dubliner might not have unanimous backing at home, he's not the same scapegoat across the water. Far from it. In actual fact, they're actually raving about him.

END_OF_DOCUMENT_TOKEN_TO_BE_REPLACED

He joined Stoke in 2007 and he's been a regular for them since. There were teething problems at first, there was even a misunderstanding with his club faithful too in that they expected something different from him. Since Mark Hughes has come in, however, Glenn Whelan has propelled himself to fan favourite status in Staffordshire and he has been named club vice captain.

They love him in Stoke, genuine love. How far gone is he from ever reaching that same relationship with supporters in green? After 68 caps and all.

To BBC Radio Stoke journalist, Matt Sandoz, Glenn Whelan is 'phenomenal'. And, to him, the Irish fans couldn't be misunderstanding Whelan any more.

"When Glenn first arrived at Stoke in '07/'08, he was part of the promotion-winning team and only two players are still remaining from then: Whelan and Ryan Shawcross," Sandoz spoke with SportsJOE about the central midfielder he has been watching every week. "Both are very important members of the Stoke team.

END_OF_DOCUMENT_TOKEN_TO_BE_REPLACED

"At first, there was pressure on him to be the creator of the side, to be a creative goal-scoring midfielder. He came with that reputation from Sheffield Wednesday - he had scored a few goals there - and the onus was on him, when he arrived, to be that man for Stoke. It didn't really work 100 per cent, that wasn't his strength."

Something the Irish can resonate with of course. It all changed though. By God, it all changed.

"Mark Hughes came in and bought creative players, guys who had that reputation, they had been there and done it - creative players that he calls match-winners. He came to Stoke and said 'actually, Glenn, your role is to be a defensive midfielder.'

"And, since he's done that, Glenn has been phenomenal over the last two years," Sandoz said. "He's doing the dirty work, making blocks, he covers the pitch well and, without him, I couldn't think what that Stoke side would be like at the moment.

"Pound for pound, you'd struggle to argue against him as the best defensive midfielder in the Premier League.

"Pound for pound, considering Stoke bought him for half a million and considering how many games he's played for the club - it must be bordering on 300 appearances. He has been tremendous value for money.

"He's been a seven out of 10 minimum every single week under Hughes. Under Pulis, he was probably struggling to be a six out of 10. There was too much asked of him. Now, he knows and the fans know what his role is and it isn't to find killer passes." 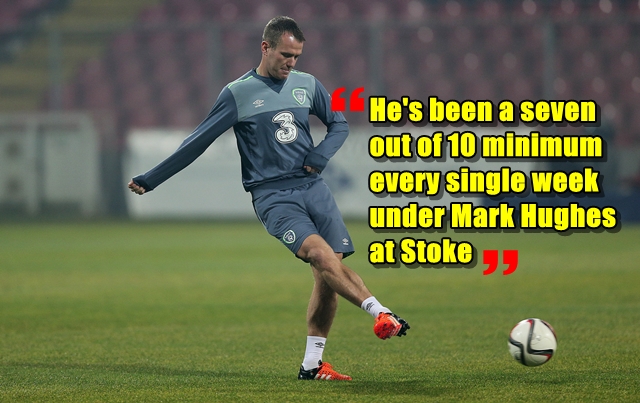 He isn't having that same effect for his country though. He couldn't be. His inclusion in the team wouldn't warrant so much speculation every bloody time a side is named. What is the disconnect between Whelan and the Irish public?

"Is it the players around him?" the Stoke-based journalist pondered. "What are Ireland fans expecting from him? To score goals? He's someone who will allow attacking players to push on and make things happen. Is it a case that Ireland haven't got enough creative players?

"Is there a better defensive midfielder than him in Ireland?

"James McCarthy might get in the Stoke team but he wouldn't get in over Glenn Whelan frequently. I don't think I've seen enough from McCarthy to put him ahead of Glenn Whelan.

"McCarthy came from Wigan for £13m. Glenn Whelan is brought in for half a million. As I say, pound for pound, I don't think there's a better defensive midfielder in the league - definitely not outside the top four. And I'm talking players of all nationalities here."

Maybe we are missing something. Maybe it is the players around him. Maybe we should look a little closer.