After a long night of intense talks, an agreement has been reached between the FAI and the Ireland Women's National Team.

Ending a row that began when the players highlighted their unfair treatment - from sharing kit to missing out on bonus fees and missing work days - mediation talks came to an end in the early hours of Thursday morning.

At 3:25am, the FAI released a statement confirming that discussions between the two sides "came to a successful conclusion" and that the issues raised by the players had been resolved. 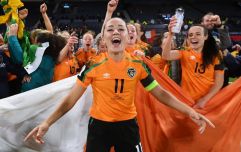 END_OF_DOCUMENT_TOKEN_TO_BE_REPLACED

"The Association is pleased that both sides have reached common agreement and a settlement, which allows the two parties to move forward together as one, in the best interests of Irish football." the FAI statement read.

The PFAI was joined by members of the Ireland team in giving its united take on the agreement.

Statement on behalf of our members, the Ireland Women's National Team. Thanks for all the support for these inspirational women! @SIPTU pic.twitter.com/4s9SGKfCh9

It will be a long day for the team, who will return to training this afternoon after turning out en masse at the talks last night in a show of solidarity.

Ireland are preparing to face Slovakia on Monday at Tallaght Stadium.


popular
Sean Dyche set to be named Everton manager after Marcelo Bielsa talks break down
Roy Keane flatly rejects longstanding perception of ex-Man United midfielder Paul Ince
Allianz National Football League Round 1: All the action and talking points
Conor McGregor hit by car ‘at full speed’ while cycling
Roy Keane leaves ITV pundits in stitches after Pep Guardiola's pre-match interview
Quiz: Identify these 15 football clubs that are not named after a place
Study shows rugby positions you are most/least likely to be injured playing
You may also like
3 months ago
FAI apologise for controversial song in Ireland team's dressing room after World Cup qualification
3 months ago
Vera Pauw breaks down in tears in emotional RTÉ interview after Ireland qualify for World Cup
3 months ago
Amber Barrett reveals incredible, personal Creeslough connection after World Cup heroics
3 months ago
Ireland make history in Scotland to qualify for first ever World Cup
4 months ago
"It's going to be a massive, massive game - probably the biggest in our history" - Katie McCabe
5 months ago
"One day, we will hopefully play at the Aviva" - Ruesha Littlejohn
Next Page