Elbouzedi strike the difference as u21s secure away win

The Irish u21 side continued their impressive Euro 2021 Qualifier campaign with a hard-earned win over Armenia away from home this Thursday lunchtime. It was a much-changed side going into the game, with injuries to the likes of Caoimhín Kelleher, suspensions for Jayson Molumby and Lee O'Connor and the Senior call-ups for Aaron Connolly and Troy Parrott all weakening one of the most exciting Irish squads in recent memory.

Ireland dominated from the off, but the first half was a tale of chances missed, with Adam Idah, Jason Knight and Nathan Collins all spurning opportunities to put the young side in front.

The breakthrough came early in the second half, a cross from the right wing from the ever-lively Idah missed everyone on the way through, and Zack Elbouzedi had the time to take a touch, compose himself and finish comprehensively.

He had the time to take a touch, make a sandwich, and bury it into the corner. Great finish.pic.twitter.com/LVAR5puBrc

What seemed to be becoming a routine 3 points took a turn in the 77th minute. Irish captain Dara O'Shea misjudged a routine Armenian through ball, a tangle of legs on the edge of the box saw him receive his marching orders and Ireland were forced to survive the final 17 minutes with just 10 men. Gavin Bazanu was forced to bravely save a wayward cross as it looped over his head, taking a crack from the post for his troubles in what was a solid performance from the 17 year-old Manchester City man on his u21 debut. 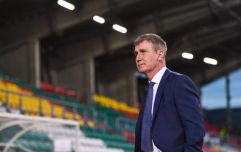 In an age of anxiety, Irish football finally rejects fatalism

END_OF_DOCUMENT_TOKEN_TO_BE_REPLACED

Ireland now sit top of Group 1 on 13 points, 4 ahead of Iceland (who have played 2 games less) and 6 ahead of Italy (who have played 3 games less). That being said, those two teams face each other later today, meaning there will be some breathing space for Kenny's side ahead of Tuesday's crunch game at home against Sweden.

A fantastic victory which keeps us 🔝 of the group 👌#COYBIG pic.twitter.com/apPSo23Vlb


popular
James Haskell on text exchange with Peter O'Mahony after Ireland's victory over Scotland
The SportsJOE 12 o'clock quiz | Day 103
Fines and suspensions in Tipperary after stewards enquiry
Can you name the first clubs these players went to after leaving Celtic?
"The academy boys have turned into small monsters over the past few weeks" - Peter O'Mahony
SportsJOE 2000s Football Quiz | Round 8
"I have more work done than any player in Ireland" - The Trevor Giles tribute show
You may also like
2 months ago
How Stephen Kenny talks about Egan and Brady is most exciting thing he brings
2 months ago
"I don't want to manage the Irish team based on who has the number of appearances for a certain club"
2 months ago
Ireland hopeful of November playoff date against Slovakia
2 months ago
Ireland set for dramatically new look as Stephen Kenny takes charge
7 months ago
Kenny plays down half-time speech as Sweden stunned by Irish comeback
9 months ago
5 class U21s who are in pole position to break into the Ireland team very soon
Next Page