'Shay retired and left the WhatsApp group... I added him back and everyone hammered him'

Jon Walters and Steve Sidwell had a fair few clubs between them, especially in the later years of their footballing careers, so they would have been well used to the club WhatsApp group(s).

According to Walters, there would usually be three groups at a club - one with players and management [strictly business], a physio and fitness group and one purely for the players.

"If ever lads were on a night out, the WhatsApp groups were going. Sometimes I'd wake up in the morning and there's just 200 messages going. Videos and pictures and lads just getting the piss taken out of them constantly."

Sidwell and Walters joined Kelly Cates on the latest episode of Liquid Football and the pair lifted the lid on what usually went on in those group messaging apps.

Walters admitted 'it's tough leaving' a group when it is time to move on from one club to the next or, as he did in the summer, retire. "I stayed in it for a while, when I left the clubs, and you enjoy it, to a point. The groups are great and you don't want to leave, but it got to the point where they are adding new lads that have signed and I just said, 'Lads, it's been great but I've got to go'."

One lad that was rapid in leaving a group, when he finished up with Ireland, was Shay Given. If only it was that simple... 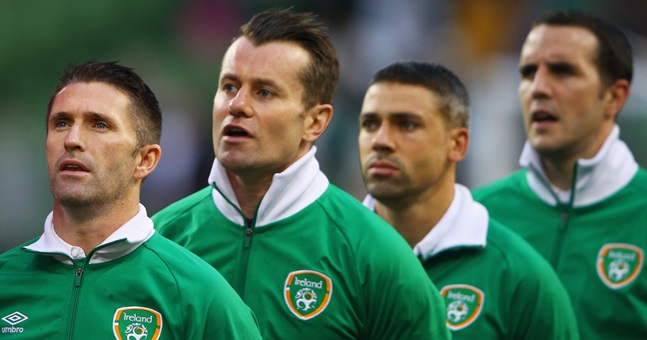 Robbie Keane, Shay Given, Jonathan Walters and John O'Shea pictured prior to the EURO 2016 Group D qualifying match between Ireland and Georgia, in 2015. (Photo by Ian Walton/Getty Images)

Given initially retired from international football in 2012 but returned to play for Ireland again in 2014 and helped his country reach Euro 2016. Following Ireland's second round exit at the hands of France.

"In the Euros, in France," Walters begins, "Ireland had the WhatsApp groups and, as I said, it's carnage. You've got to be careful with your phones because the kids [younger players] get hold of them and there's all sorts going in there.

"So I got it up. We hadn't even left the hotel and Shay Given had left the group.

"He retired from Ireland and left the WhatsApp group. So, I was the admin. I added him back in and everyone just hammered him! He left again, and I added him again and everyone kept hammering him. And then he left. He cut his ties straight away!"

He may have represented his country 134 times and made it to three major championships, but the Irish lads were certainly not standing on ceremony.

HEAR THAT STORY, AND PLENTY MORE, ON LIQUID FOOTBALL: