The Republic of Ireland beat Lithuania 1-0 in an international friendly on Tuesday night at the Aviva Stadium.

Kenny's side went into the game against the side ranked 137th in the world on a high after drawing 2-2 with Belgium on Saturday. Ireland almost failed to carry that momentum into Tuesday's match, however.

They put in a lacklustre display against meagre opposition and were rescued by a stunning late goal from substitute Troy Parrott. Here are our player ratings for Stephen Kenny's team. 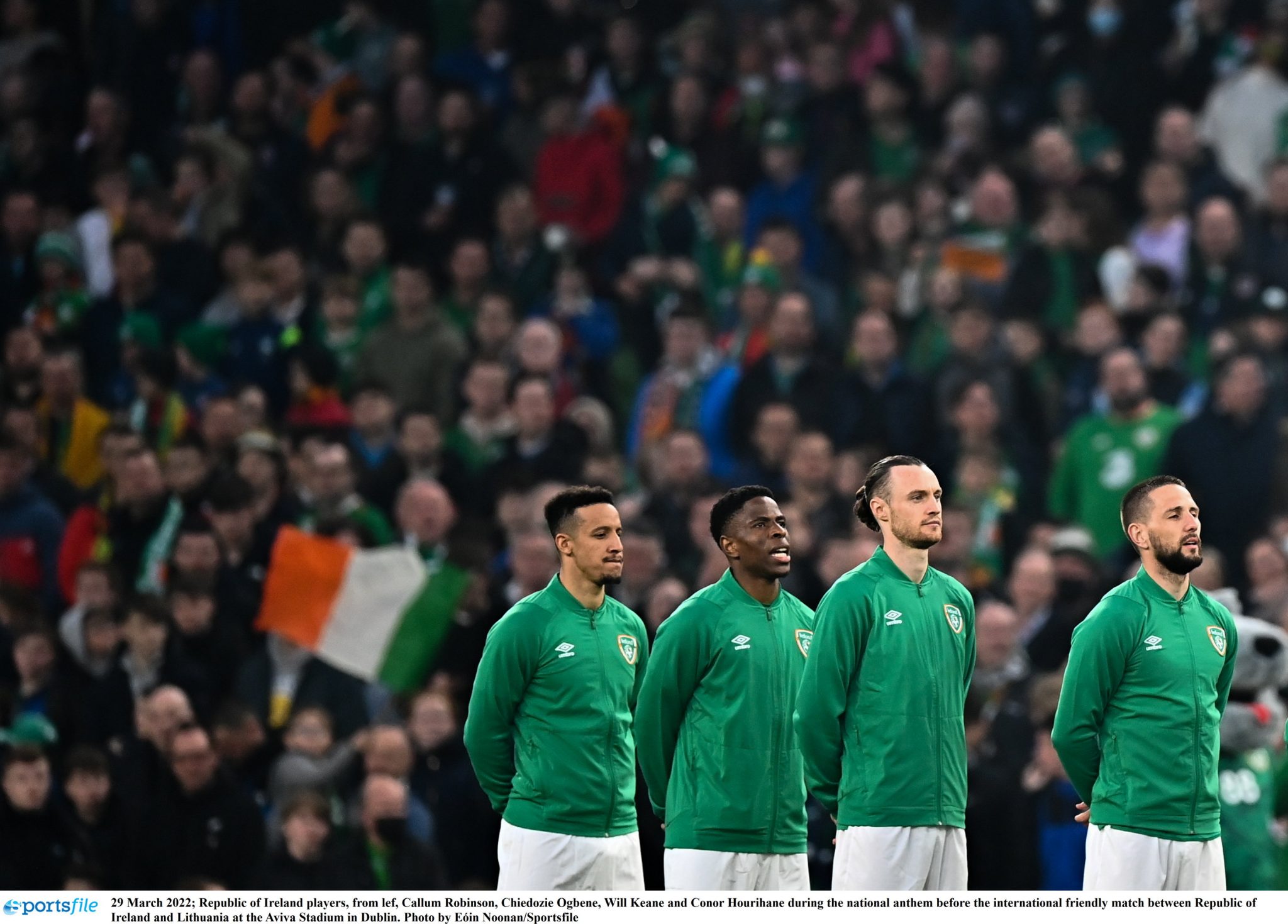 The Liverpool goalkeeper kept his place and the 2-2 draw with Belgium but had very little to do against Lithuania, who presented almost no threat to Ireland's goal.

END_OF_DOCUMENT_TOKEN_TO_BE_REPLACED

O'Shea, who replaced Coleman in the starting XI, came into the team to get some much needed minutes. The 23-year-old missed five months of the season with an ankle injury and has played just 140 minutes for West Brom in the Championship since returning to action. O'Shea got some valuable playing time and looked comfortable bringing the ball out of defence.

END_OF_DOCUMENT_TOKEN_TO_BE_REPLACED

Egan captained Ireland on the night and retained his place from Saturday's match against Belgium. The Sheffield United defender was excellent in that game but didn't need to be against a weak Lithuania side.

Egan did what was asked of him against limited opponents. If Ireland's deliveries had have been better from set-pieces, he may have also been more of a threat in attack. 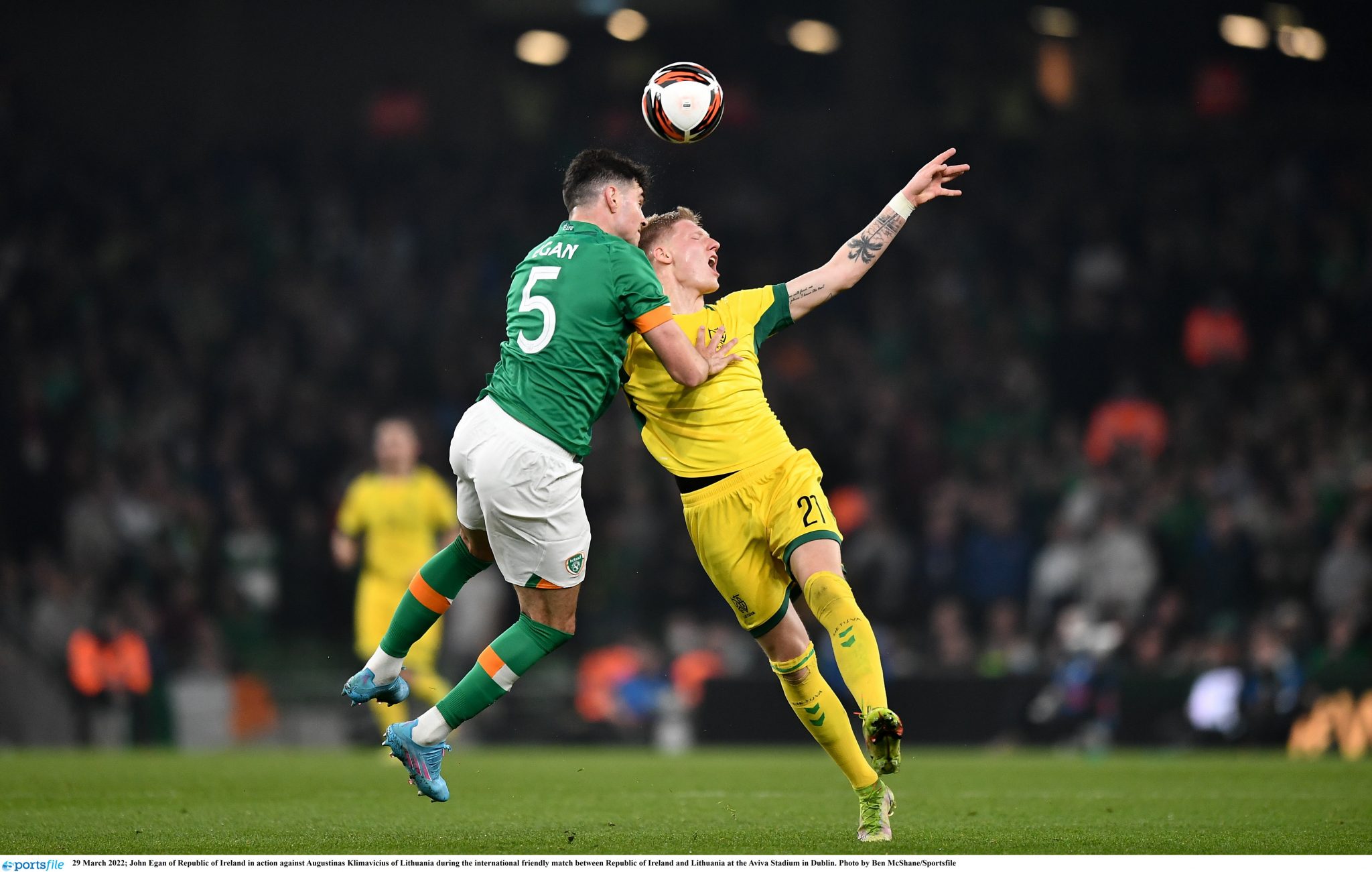 Collin came into the team to win his second cap. The Burnley defender didn't waste his chance either.

Collins was impressive, particularly in the first half. The 20-year-old won every header he contested and looked comfortable carrying the ball out of defence.

The Leixlip-native is definitely one to watch for June's competitive Uefa Nations League games. 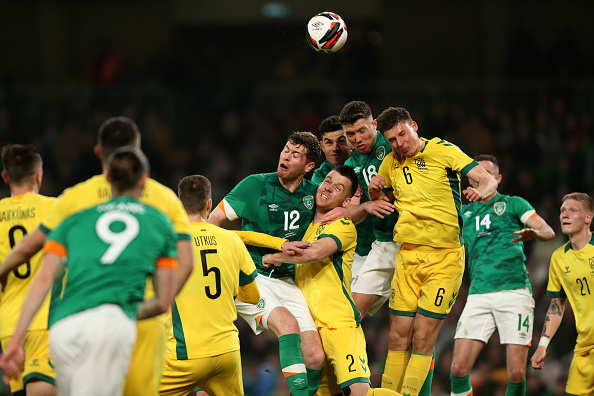 The Tottenham defender was involved in both of Ireland's goals against Belgium and got better as the night went on against Lithuania.

For the first 45 minutes, Doherty looked off the pace and often appeared too casual in possession. The Dubliner also didn't offer enough in attack.

Doherty improved massively after the break, however. He put in one excellent cross for his teammates to attack, set up Hourihane's goal, which was ruled out for offside, and was unlucky not to score after going on a run into the box.

He was Ireland's best attacking outlet in the second half. 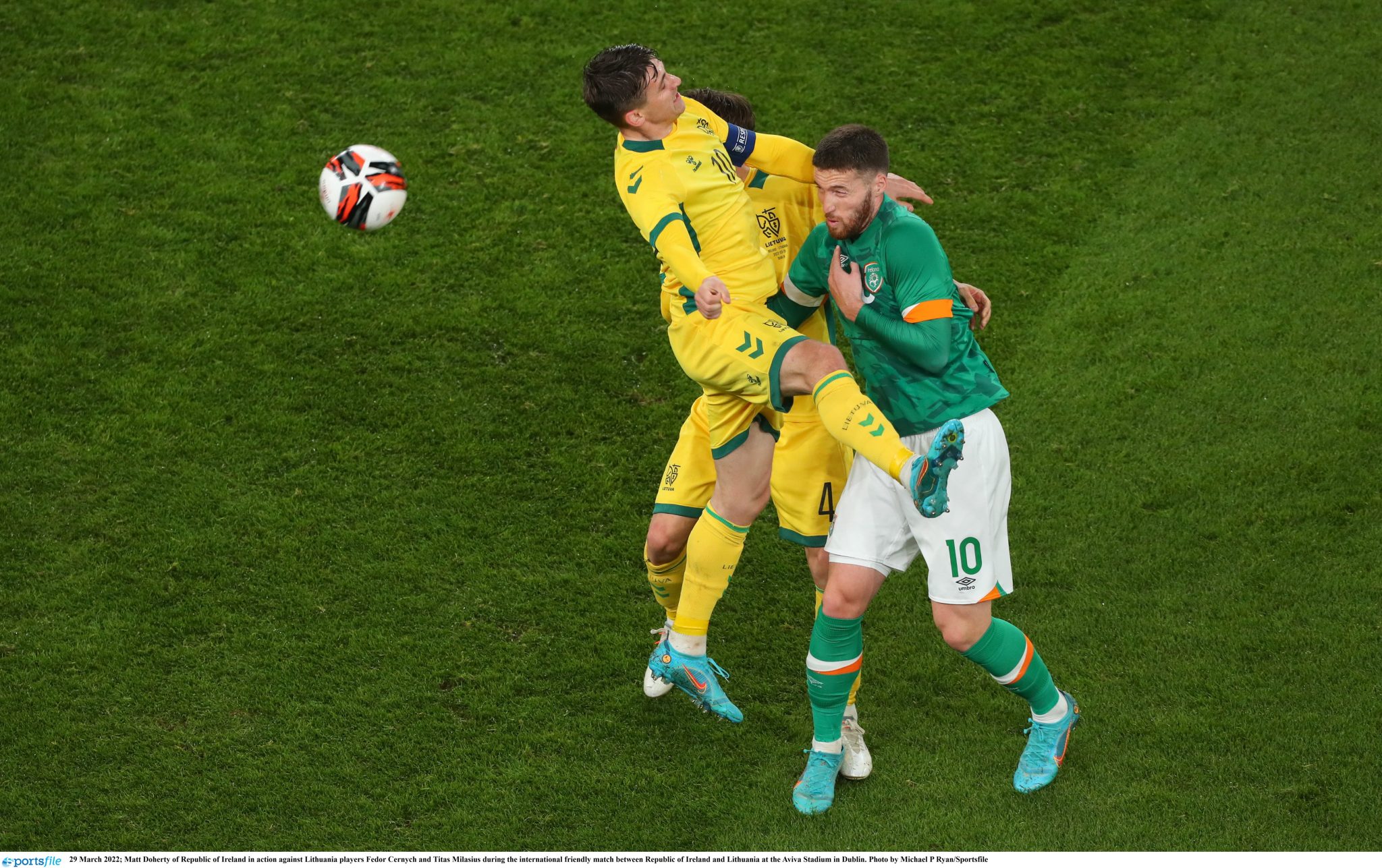 The Swansea City defender came into the team to earn his sixth cap and showed some flashes of quality. Manning provided width to Kenny's team in the first half and got behind the Irish midfield to deliver some dangerous crosses in the penalty area. The Galway-native, 25, also linked up well with his teammates before moving into the back three with 30 minutes to play.

Hourihane replaced Josh Cullen in Ireland's starting XI but did little to suggest he could be a starter for Kenny in June. The midfielder, currently on loan with Sheffield United from Aston Villa, had some neat touches and passes, but his deliveries, particularly from set pieces, were disappointing.

In the first half alone, Hourihane took seven corners, and only once did he find an Irish player with his cross - Egan at the back post.

A team needs to take advantage of its set-pieces at international level, especially against a limited opponent content to sit deep, but Hourihane's deliveries were, unfortunately, not up to scratch for most of the evening. He was, however, unlucky to see his goal ruled out for offside. 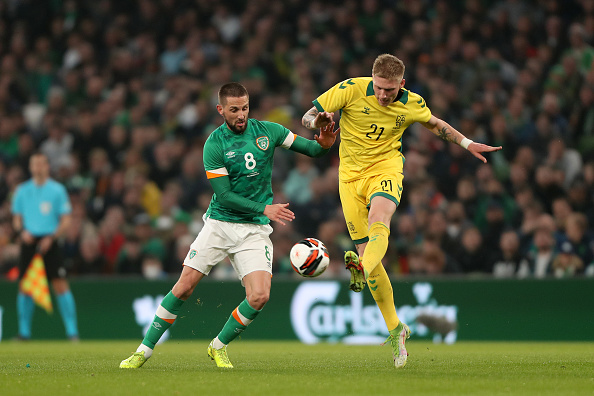 The Preston North End midfielder was given an opportunity to impress from the start against Lithuania but didn't have the same impact as on Saturday when he scored against Belgium as a substitute.

Browne is at his best when attacking space and making late runs into the opposition penalty area. There were few opportunities to do that against Lithuania.

He and Hourihane did not work excel as a midfield partnership. 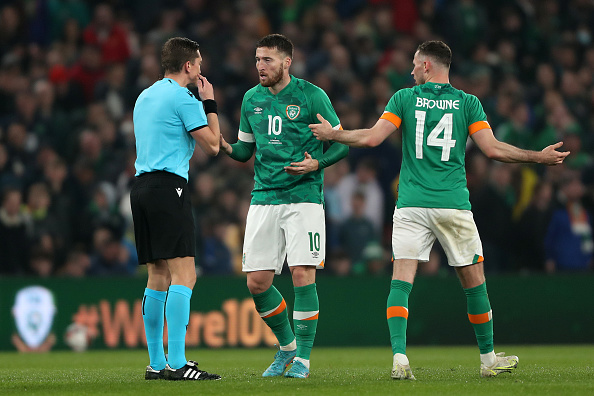 Robinson is a key player for Kenny and was the team's talisman at the end of 2o21 when he scored six goals in nine games.

The West Brom forward worked hard throughout the game on Tuesday night. Robinson, however, couldn't find the net and hit some wayward shots, and was part of a front three that struggled to find any cohesion.

Ogbene kept his place after scoring and setting up a goal against Belgium. The Rotherham winger pressed hard and looked dangerous when he gained possession.

Ogbene was direct and unfussy in his approach against Lithuania. He tried to beat his opponent or get the ball into the box for teammates to attack, and also lifted the crowd every time he was in possession.

He scored two goals that were ruled out for offside. 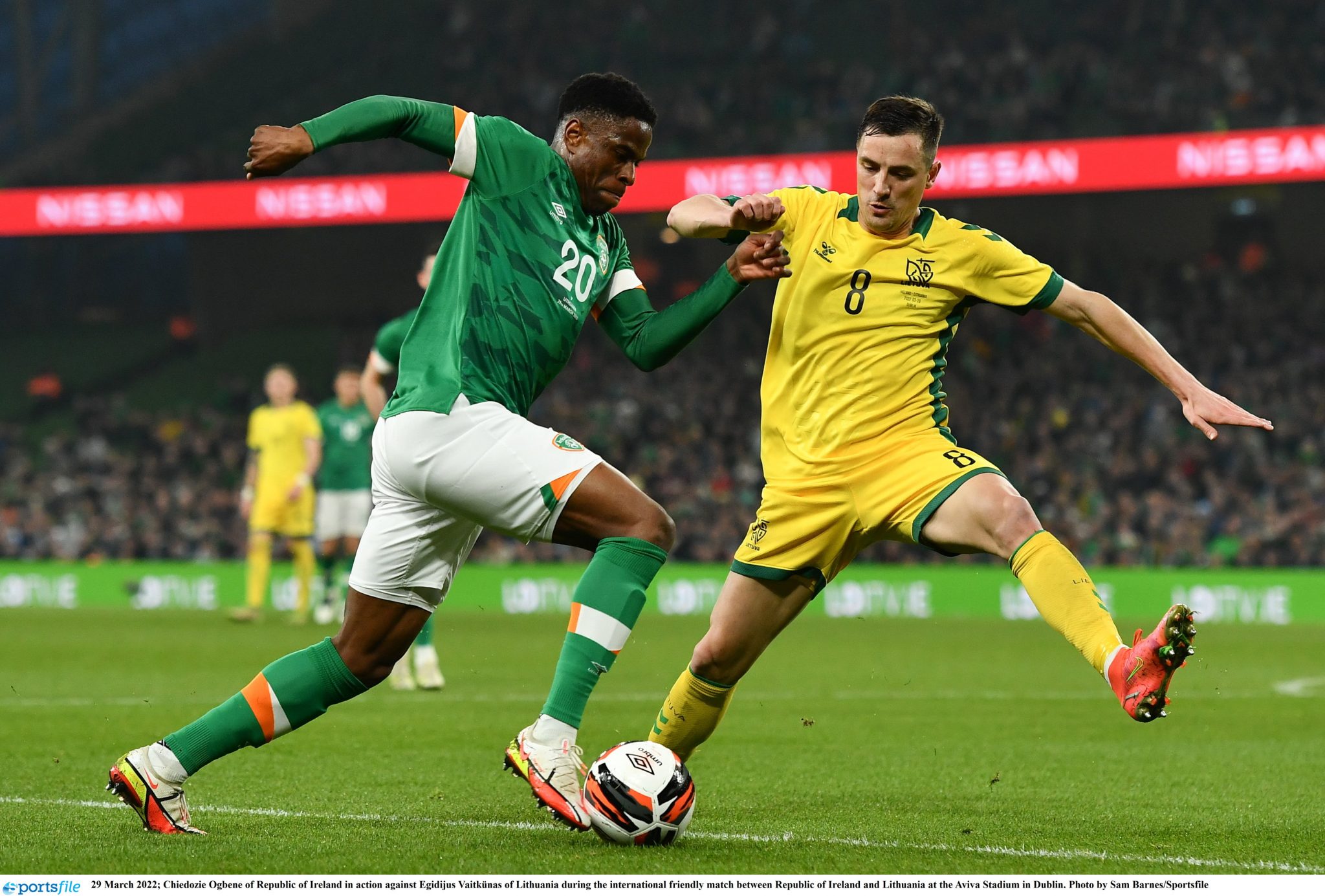 The Wigan Athletic forward earned his third cap against Lithuania and was given the opportunity to carry his excellent club form onto the international stage.

Keane has scored 19 goals in 35 League One games this season, but he rarely looked like breaking his international deadlock.

He showed some nice touches when he dropped deep to link play, but Keane had faded from the game by the time he was substituted after an hour.

The MK Dons forward came on as a substitute for the last 30 minutes and showed his quality by playing in McClean, who was offside when he squared for Ogbene to score.

In the 97th minute of the game, Parrott, who had almost scored a few minutes earlier, netted a stunning goal from just outside the penalty area to win the game for Ireland.

The Dubliner found space on the edge of the box and rifled a shot into the net.

Even if he had not scored the late goal, the 20-year-old had a positive impact on the match and will be in contention to start June's Uefa Nations League games.

The Wigan winger worked hard and was direct but strayed offside before teeing up Ogbene, who saw his goal ruled out.

The trio were not on for long enough, or involved enough, to be rated.