The Republic of Ireland recorded a credible draw with Belgium on Saturday evening at the Aviva Stadium in Dublin.

Stephen Kenny's side were twice trailing to the world's number-one ranked international team, who had no players with more than 50 caps in their side, and twice they came back to score equalisers.

Chiedozie Ogbene scored Ireland's first goal and set up the second with a cross for substitute Alan Browne to head home. Here's how we rated the Ireland players. 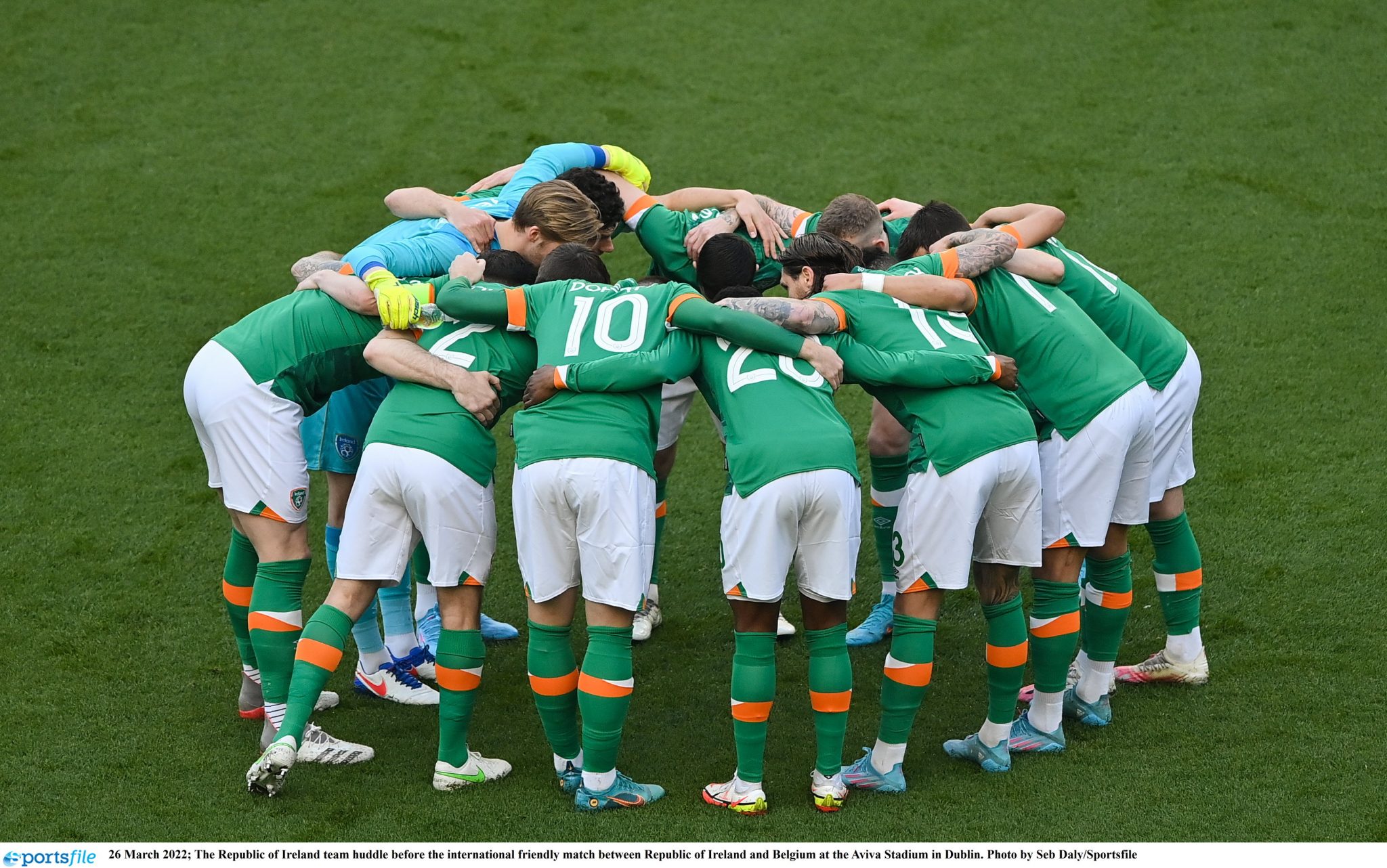 END_OF_DOCUMENT_TOKEN_TO_BE_REPLACED

Kelleher had the opportunity to stake his claim to be Ireland's first-choice goalkeeper. The Liverpool shot-stopper could do little to stop Batshuayi's wonderful strike and he was arguably let down by his defence for Belgian's second goal.

The 23-year-old was, however, a calm presence behind Ireland's back-three and his quality on the ball was evident when he was in possession.

Hans Vanaken gets on the end of a Thorgan Hazard corner to Belgium back in front against Ireland! pic.twitter.com/zzl3D7eZSr

END_OF_DOCUMENT_TOKEN_TO_BE_REPLACED

Coleman has experienced a difficult season at club level with Everton, and while the Ireland captain is still a key player for the national team, he looked somewhat off the pace against Belgium.

The 33-year-old, earning his 64th cap, started on the right of a back-three and was exposed for Belgium's opening goal. Coleman went on to win several tackles that helped stop the visitors from building momentum, but it wasn't a vintage display.

The Brighton defender came into the game having only played five Premier League matches since January. So, it's possible that this rustiness explains why Duffy hit a loose pass in the buildup to Belgium's opening goal.

He at least recovered to play a part in Ireland's equaliser. The Brighton defender remained upfront after Ireland won a corner and occupied the Belgian players before Ogbene scored.

However, like the rest of Ireland's defence, Duffy's role in Belgium's second goal was questionable as Hans Vanaken scored a free header from a corner. 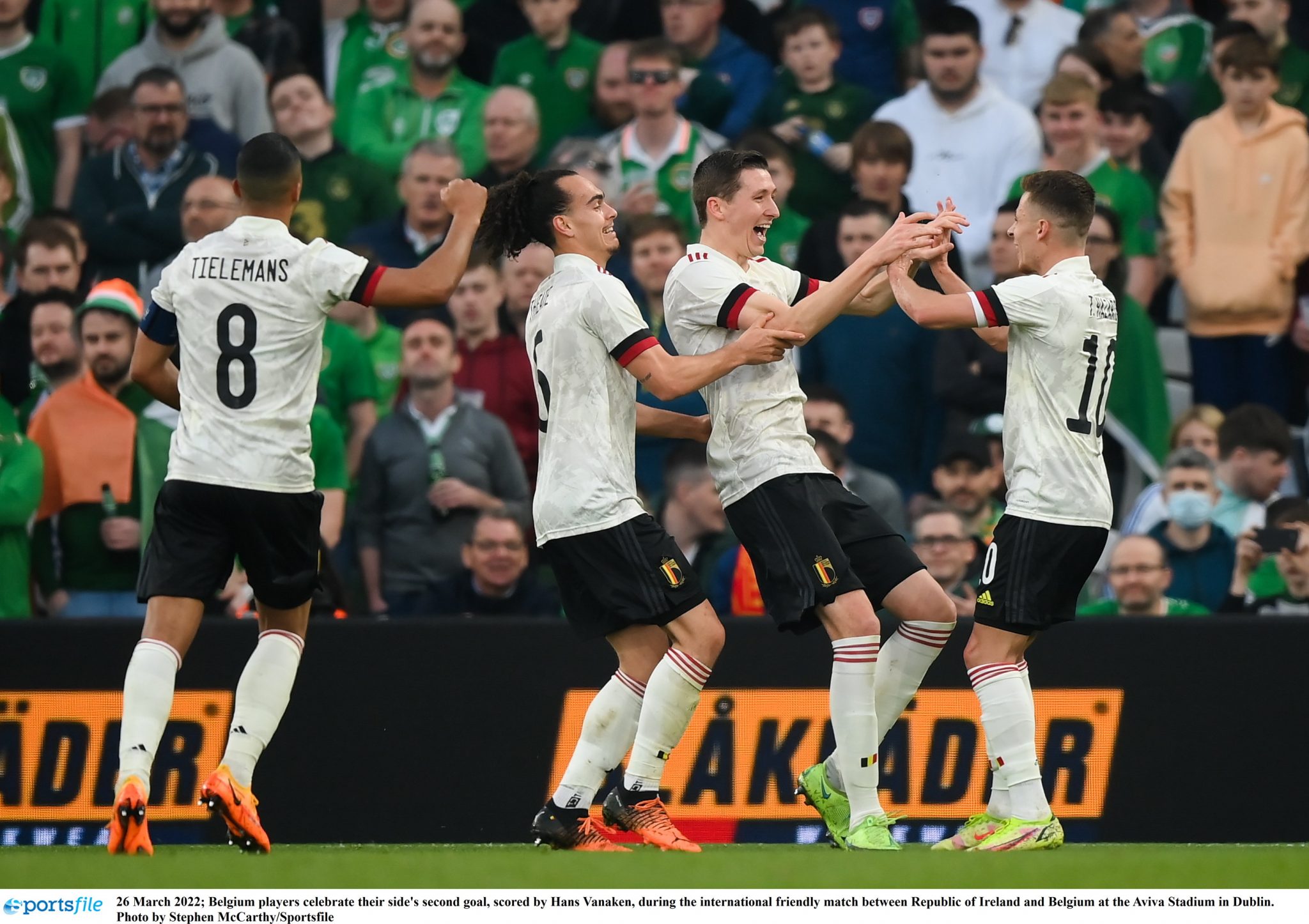 Egan has been Ireland's best defender under Kenny and it was the same on Saturday. The Sheffield United central defender started the game brilliantly and won several tackles high up the pitch. He was, by a distance, Ireland's best player out of possession and also impressed when carrying the ball forward.

Doherty came into the March friendlies in excellent form with three assists and a goal in his last five Premier League games. However, he did not cover himself in glory for Michy Batshuayi's strike.

Doherty was high up the pitch when Ireland lost the ball, which isn't a surprise given he was playing as a wing-back. Yet, the Tottenham defender didn't get back quickly enough and left Coleman in a one v one with Batshuayi.

Doherty redeemed himself by playing a part in Ireland's equaliser. He stopped the ball from going out of play and his cross into the box eventually reached Robinson, who put the ball into the penalty area for Ogbene to score.

Doherty was also involved in Ireland's second goal when his overhit pass was kept in play by Ogbene, who crossed for Browne to score.

What a goal from Chelsea's on-loan striker Michy Batshuayi to put Belgium 1-0 up against Ireland 👌pic.twitter.com/LmsBrMnRon

Winning his 89th cap, McClean started at left wing-back and was the least involved of Ireland's outfield players in the first 30 minutes of the match.

The Wigan winger, however, grew into the game. His final ball and pass choices were sometimes questionable but he was involved during Ireland's best spells in the match in the 30-minute period before and after half-time.

Cullen could have given his Ireland teammates the inside track on Saturday's opponents. The midfielder has been an ever-present for Anderlecht and has kickstarted his career in Belgian football under the tutelage of Vincent Kompany.

The 25-year-old has also become a key player for Kenny, and the one who keeps ticking over in midfield. He started brightly on Saturday and was neat and precise with his passing.

Cullen dropped deep and looked to get Ireland going. The midfielder, however, arguably needed another player alongside him to stop Belgium from gaining control of the game. 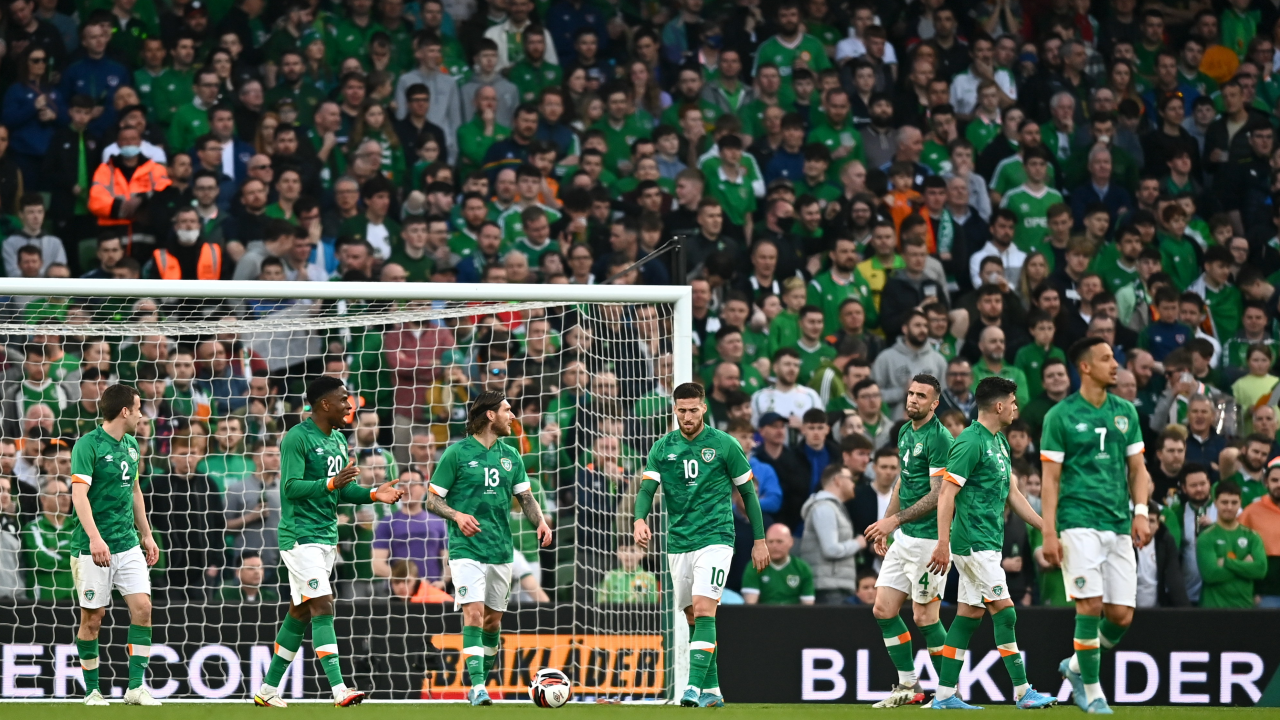 Earning his 69th cap, Hendrick started alongside Cullen in central midfield. The Dubliner, currently on loan with QPR in the Championship from Newcastle, was caught ahead of the play for Belgium's goal.

Hendrick showed some flashes of quality, such as one excellent defence-splitting pass in the second half, but he was often a step or two behind Ireland's opponents. He and Cullen arguably needed another midfielder alongside them to stop Belgium from passing around them.

Knight made his first start for Ireland since last June in a goalless draw with Hungary.

The Derby County midfielder played on the left of a forward three on Saturday and was energetic and determined, but his final ball was often lacking.

It would have been interesting to see how he fared in central midfield. 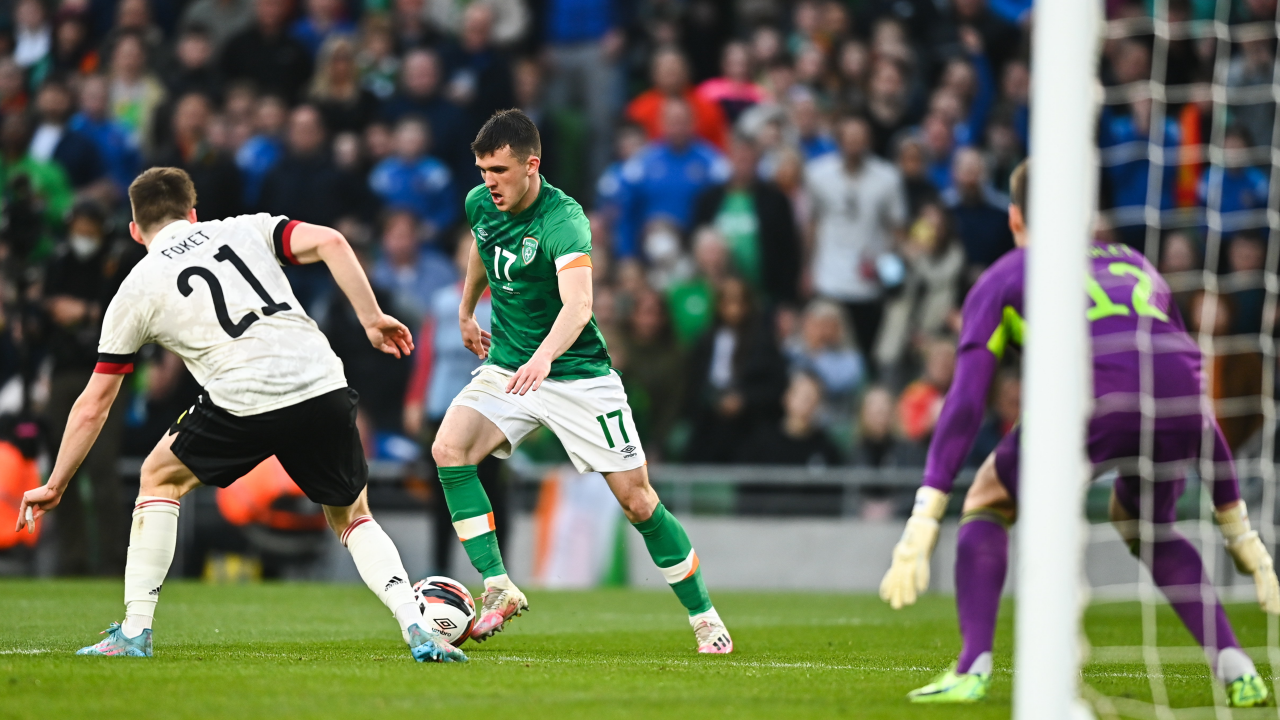 Ogbene added to his impressive tally of two goals in five appearances for Ireland to make it three in six.

The Rotherham winger was hardly involved in the match for most of the first half. Like the rest of Ireland's front three, he couldn't get close to Belgium and barely touched the ball. Yet, Ogbene stunned the visitors with an audacious overhead kick. 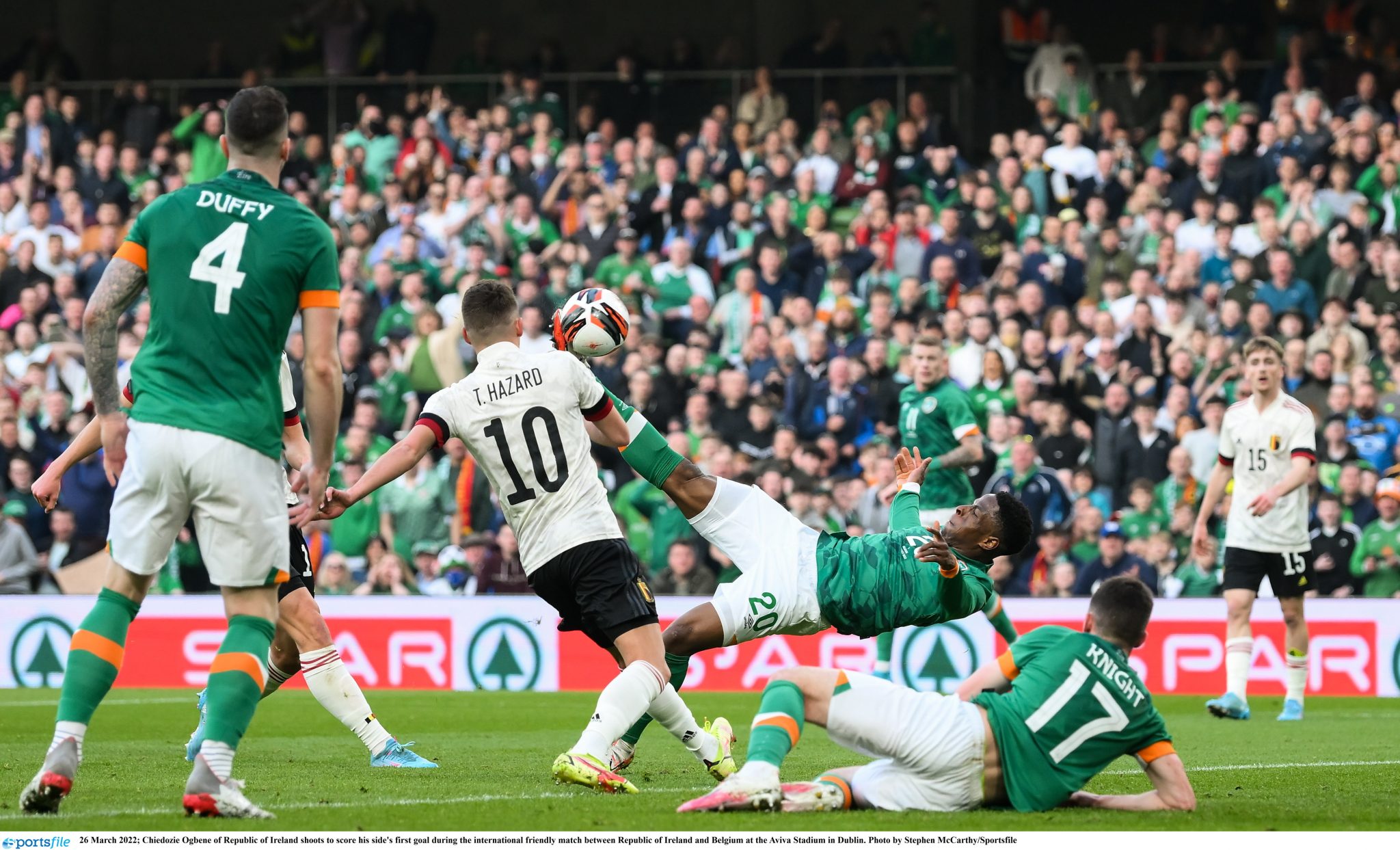 The former Cork City winger received some luck with a deflection from a Belgian defender before the ball hit the net, but he deserved the goal purely for having the nerve to try the bicycle kick.

Ogbene also set up Ireland's second goal five minutes from full-time. The winger kept the ball in play and floated a cross into the box for Alan Browne to attack. Ireland's man of the match.

Robinson was Ireland's talisman in 2021. In his last nine games for the national team, the West Brom forward has scored six goals.

On Saturday, Robinson turned provider and helped set up Ogbene's goal by crossing into the packed penalty area, where the ball eventually fell for his teammate to score.

Robinson was largely on the edge of the game and Ireland found it difficult to get him the ball in dangerous positions. Yet, he made a positive contribution when called upon for the team's first goal.

The Preston midfielder was only on the pitch for the final 15 minutes but made a massive impact on the match by scoring a thumping header past Mignolet.

They weren't on the pitch long enough to be rated.