Italia '90 revisited: 29 stages of masterminding a historic draw with Holland

If things go our way elsewhere, all we need is a draw? We're listening.

25 years since Ireland and the Netherlands locked horns for a place in the World Cup second round.

Here are the 29 stages of one of the biggest ever nights in Irish football.

1. The buzz is building 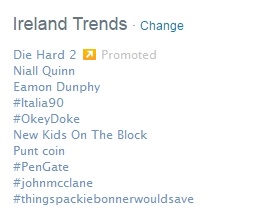 2. Someone is missing though

After his pen-throwing strop post Egypt, Eamon Dunphy isn't with the RTÉ panel for this one having flown out to Italy. However, he was denied an interview with Irish manager, Jack Charlton, so Bill O'Herlihy is at hand to calm the storm. Again.

3. Someone else is missing 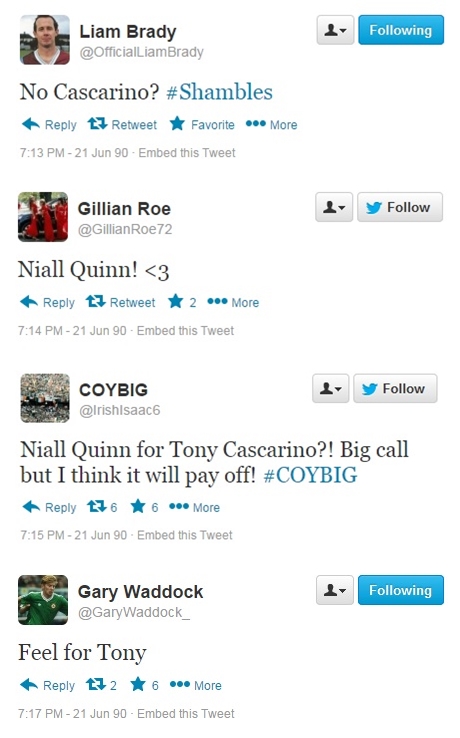 4. The Irish fans are belting out the anthem long after the Italian band's shortened version has finished

But not everyone has goosebumps. 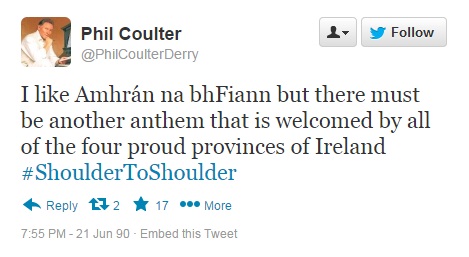 5. This is where the term going to the wire comes from

Ireland are rooting for an England or Egypt win - as long as it's a win - because we're of course going for the draw ourselves. 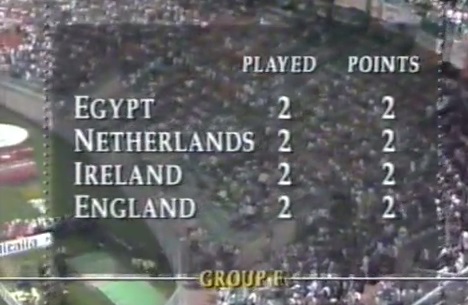 6. John Aldridge fires in a thunderbolt at van Breukelen early on

The Irish are torn apart.

8. And everyone wants a piece 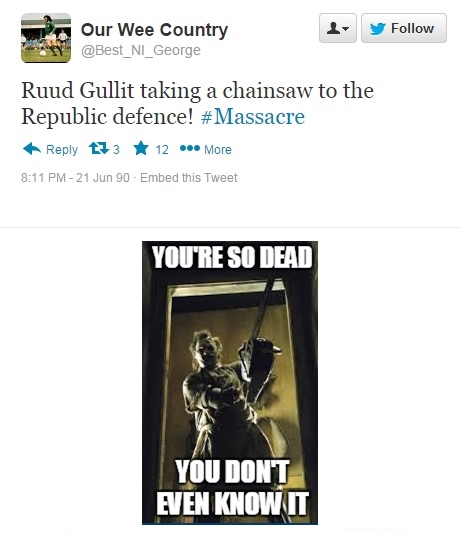 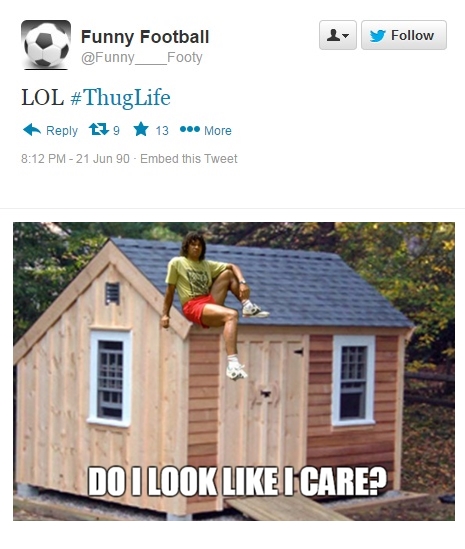 The world is against them.

13. Johnny Giles is drawing all over our TV screens and no-one knows what's happening

14. The people miss The Dunphy 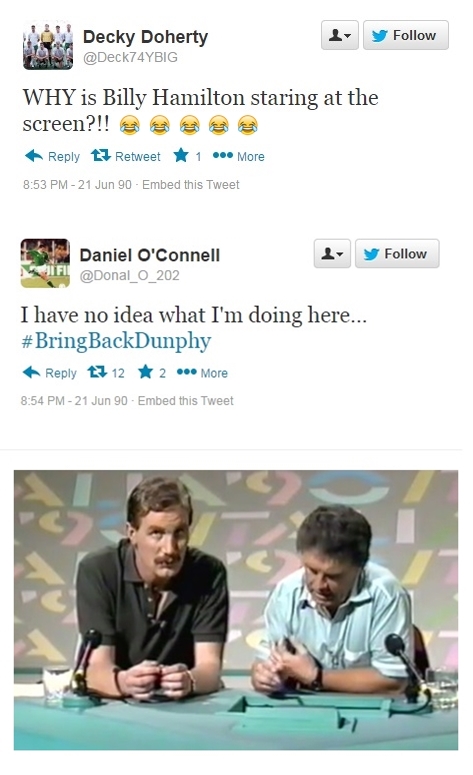 15. A big chance passes both strikers by in the second period

But Quinn's fall-on-your-arse trick is under most scrutiny. 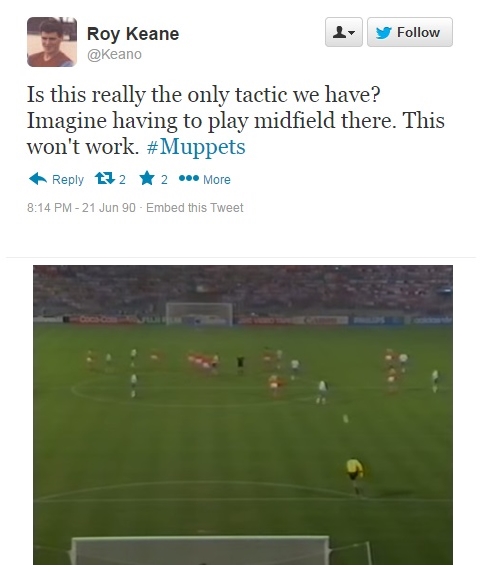 18. Was it the greatest goal of all time? 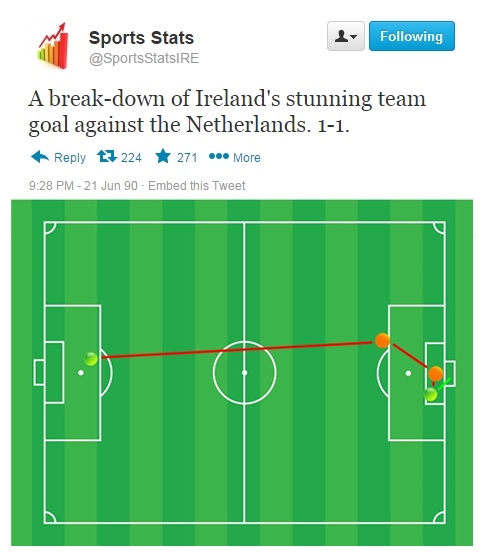 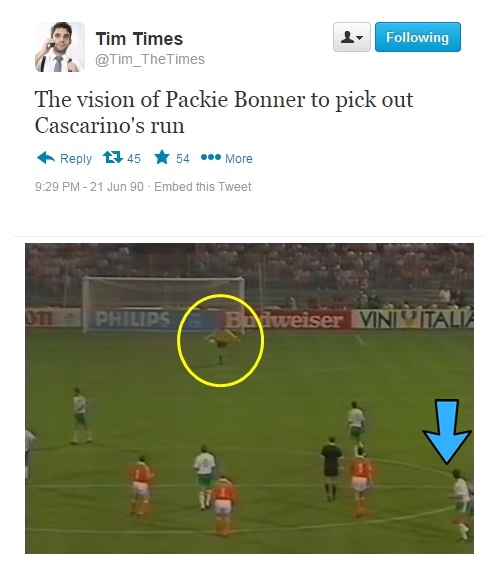 20. There's an unspoken agreement playing out

1-1 suits both the Netherlands and the Irish perfectly and the finest piece of injury time in football history unfolds in Palermo. 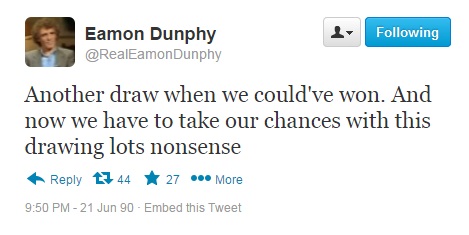 Big Jack masterminded the draw and he doesn't even care if they have to face West Germany now.

24. Bill O'Herlihy sums up the feelings of a nation 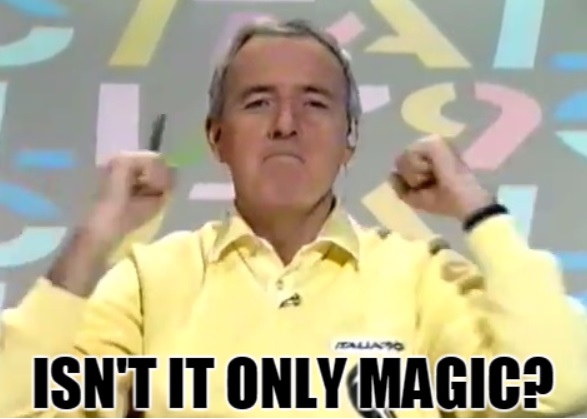 26. Ireland's group standing will be decided by drawing lots 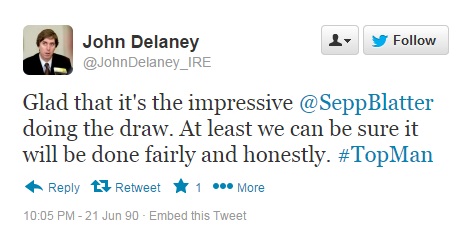 28. Goalscorer Niall Quinn calls the Irish fans the best in the world

Not before a classic 90s television gaffe.


popular
How many of the 49 Premier League clubs can you name?
The SportsJOE 12 o'clock quiz | Day 115
SportsJOE 2000s Football Quiz | Round 10
QUIZ: See if you can identify these retro football kit sponsors
QUIZ: Can you name the first professional teams of these footballers?
Roy Keane on the experience of being managed by Jack Charlton at USA 94
Jack Charlton's role in getting Roy Keane to Manchester United has been revealed
You may also like
3 years ago
WATCH: Paul McGrath's scarcely believable Italia '90 story sums up Jack Charlton's Ireland perfectly
4 years ago
PIC: Sky Sports tell Irish football fans that Italia '90 was all a dream
5 years ago
The most Irish milk bottle of all time celebrating Italia '90 is now a priceless piece of history
5 years ago
Forget the Twitter reaction. Here's what the newspapers had to say about Italy v Ireland in Italia 90
5 years ago
Italia '90 revisited: Ireland v Romania, Timofte, Bonner and a piece of commentary to live for the ages
5 years ago
It was Ireland and Holland's Italia 90 agreement all over again in the U21 Euros yesterday
Next Page