Adam Idah ready to play, but Ireland hit with late blow ahead of Azerbaijan clash

Ireland must do without one of their best midfielders for this evening's World Cup qualifier against Azerbaijan, in Baku.

Stephen Kenny's match-day 23 for the game has been confirmed to Uefa, this morning, and it is a 50/50 split for good and bad news.

END_OF_DOCUMENT_TOKEN_TO_BE_REPLACED

Starting with the positive, Adam Idah is included in the match-day squad. The Norwich City striker, who has led the line very well for Ireland over the past few qualifying games [albeit without scoring], was feeling unwell during the week but travelled to Baku and has made the cut.

It remains to be seen if Kenny will start Idah after he trained very little over the past few days. His other options include Aaron Connolly, James Collins, Troy Parrott and Callum Robinson.

With Idah included in the 23, Kenny has opted to leave Wigan Athletic forward Will Keane out. The former Manchester United and Ipswich Town man may have to wait until next Tuesday's friendly with Qatar to get a debut chance. 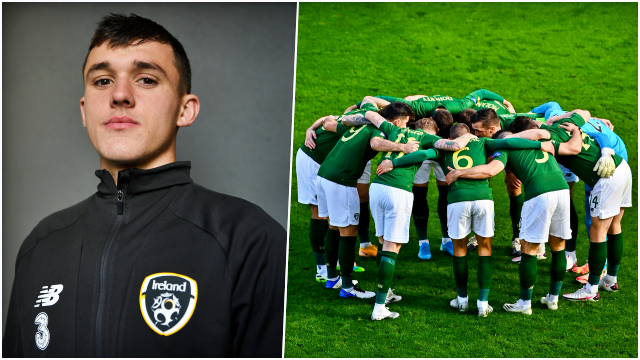 Jason Knight must wait a few more days for another opportunity to wear that green jersey. (Credit: Sportsfile)

Elsewhere, illness has ruled out Derby County midfielder Jason Knight. Having missed the September qualifiers after being injured in training by boss Wayne Rooney, Knight would have been hoping to come straight back into the Ireland XI.

Both he and Idah had reported sick, earlier in the week. Knight did some training in Azerbaijan's Olympic Stadium, on Friday, but he has not been deemed close to 100% and will sit this one out. He, too, will be aiming for game-time agains Qatar.

END_OF_DOCUMENT_TOKEN_TO_BE_REPLACED

Kenny does have a ream of other midfield options, with Jeff Hendrick and Josh Cullen likely to start in the centre of the park. Conor Hourihane and Harry Arter are other options at Kenny's disposal.

"It's a game we're desperate to win and we'll be doing everything we can to get that done," Ireland defender John Egan said at a Friday press briefing.

"Azerbaijan are a difficult outfit as they showed in Dublin but we know that if we can play the way we know we can play, we will get the victory we need and want as a group."