You can expect this to sell out, so be quick.

Irish fans of Glasgow Celtic who thought they'd never get the chance to see Henrik Larsson play in the flesh may think again - he's coming to Bray next month.

Larsson, along with a number of Celtic legends including Stiliyan Petrov, will play a charity match against an 1888Fitness XI in aid of Ger Doolin. 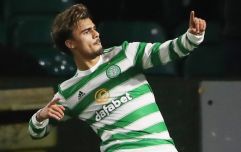 END_OF_DOCUMENT_TOKEN_TO_BE_REPLACED

Doolin is a close friend of Bray's first team coach Graham Kelly, and was the victim of an unprovoked attack last July which left him in a coma, with a fractured skull and three bleeeds on the brain.

The 40-year-old had been on a stag in the Co. Leitrim town of Carrick-on-Shannon on 17 July when the attack occurred.

As well as Larsson - Celtic's third top goalscorer of all time behind Bobby Lennox and Jimmy McGrory - former stars Tom Boyd, Alan Stubbs and Bulgarian midfielder Petrov will all take part at the Carlisle Grounds on 29 April.

According to the club's Facebook page, 'tickets priced only €5 are available from the Carlisle Grounds from Monday to Thursday from 10am to 3pm and also in the club shop at all home games.'


popular
Mario Balotelli, Luis Suarez, Fernando Torres and why Rio Ferdinand "hated them"
"I don’t trust you" - Joey Barton delivers brutal dismissal of Irish defender
"I remember just hugging this Irish guy" - How one Kiwi rugby star reacted to Ireland's historic series win
Quiz: Who plays here? Match the club to these 25 stadiums
Gatecrashed interviews and chip-shop previews - Wexford GAA's online coverage sets the standard
"I'll ask for everyone that comes to the game to wear purple and roots for us" - Pat Fitzgerald
FIFA set to move the start date of 2022 World Cup
You may also like
2 weeks ago
Your guide to a superb weekend of sport and how to stream it all
2 months ago
Liam Scales may depart Celtic this summer transfer window following interest
2 months ago
Celtic line up seven signings for Champions League group stages
2 months ago
Aiden McGeady details the abuse he suffered after playing for Ireland instead of Scotland
2 months ago
Rangers legend says he and Roy Keane didn't speak during Man United spell
2 months ago
Quiz: How well do you know Celtic's nine-in-a-row team of the 2010s?
Next Page