Scottish football is back as the new season kicked off on Saturday.

However, some things never change. Celtic are still too strong for the opposition, they're top of the table and Kyle Lafferty is still unpopular at Celtic Park.

Brendan Rodgers side dispatched Hearts 4-1 on Saturday afternoon, and Lafferty managed to get on the wrong side of Celtic fans. The former Rangers striker joined Hearts when he was let go by Norwich City earlier this summer, after scoring four times in three years for the Canaries. 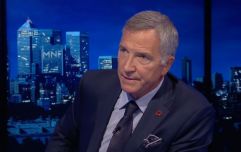 END_OF_DOCUMENT_TOKEN_TO_BE_REPLACED

Lafferty, who played for Celtic's bitter rivals Rangers between 2008 and 2012, was booked in Saturday's game, and eventually taken off after 71 minutes. The Northern Irish forward was spotted making what appears to be a rude gesture as he took his place on the bench.

Lafferty was accused of "giving Celtic fans the finger" by many on social media.


popular
Peter O'Mahony riled by "petulant s**t" as Munster toasted by Dragons
Grim injury news for Seabelo Senatla after Bundee Aki's red card clear-out
The largely ignored reason Ireland rely on James McClean and Jeff Hendrick so much
Why Canada are the only country that won't have a new jersey for the World Cup
"When I give a slap, you feel it" - Israel coach slaps player during playoff win over Ireland
The clear-cut differences between what Stephen Kenny and Dara O'Shea said, last night
Kevin Cassidy believes former teammate should be the next Donegal manager
You may also like
1 week ago
'We will abide by the protocols' - Ange Postecoglou says Celtic will pay their respects to Queen Elizabeth
1 week ago
Sky Sports 'to turn down Celtic crowd noise' in case of offensive Queen chants
1 week ago
Uefa charge Celtic for banner as Rangers escape punishment
2 weeks ago
Celtic supporters unfurl provocative banners before Champions League tie
3 weeks ago
Ally McCoist did not hesitate with stark admission after Celtic thumped Rangers
3 weeks ago
Your guide to a huge weekend of football, rugby and Formula 1 and how to stream it all
Next Page